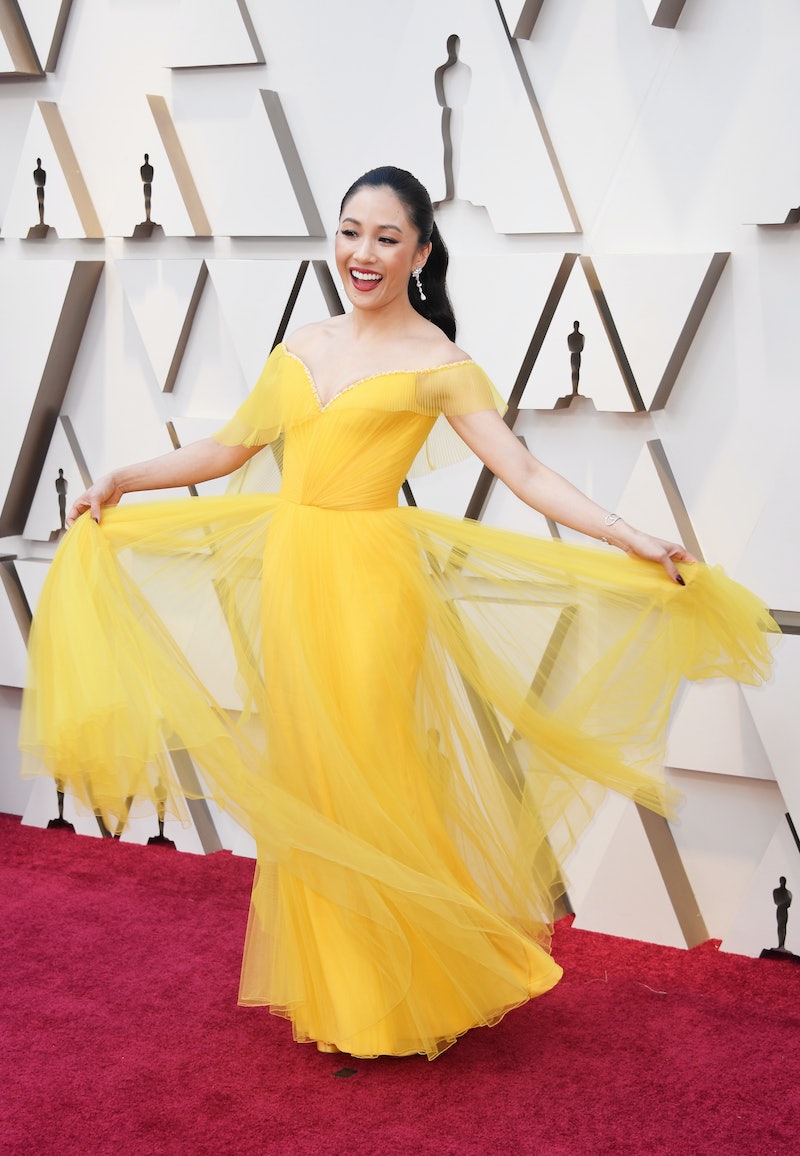 Crazy Rich Asians was one of the biggest and most beloved blockbusters of 2018. The cast has been visible throughout the 2019 awards season and everyone has looked incredible when making the red carpet rounds. All of the looks from the Crazy Rich Asians cast at the 2019 Oscars will blow you away and perhaps inspire you to Netflix and chill with the film ASAP.

The Oscars are the period on the end of the sentence that is the busy and beautiful Hollywood awards season. You won't be alone if you are feeling pangs of sadness at the prospect of missing the cast of this killer film turn up with their fabulous fashion displays.

Actors Constance Wu and Gemma Chan both opted for bold and bright pops of color with their respective Academy Awards gowns. Meanwhile, Michelle Yeoh sparkled in an elegant and sophisticated creation. Awkwafina slayed a shimmering lavender pantsuit and had the most awesome accessory of the night — her matching, glittery clutch doubled as a flask. Now that's functional fashion.

Ultimately, all of the actors in the film have consistently proven that they are a stylish and glamorous ensemble at various events. Here's a look at the cast of Crazy Rich Asians at the 2019 Academy Awards.

Wu's canary yellow Atelier Versace frock was pure magic. The adventurous color was tempered by the soft, airy fabric. The dress flowed and moved with Wu.

The color will remind you of Michelle Williams' iconic Vera Wang gown from the 2006 Oscars. Judging from Wu's red-lipped smile and the way she twirled, she loved wearing this dress.

Yeoh was a vision in her Elie Saab dress with the deeply-dipping V bodice. The contrast of the blush base and the silver and gold embellishment was breathtaking. Yeoh didn't wear the famous ring from the film to the Oscars but she didn't skip the bling either.

Her wrist was wrapped in diamonds, courtesy of her bracelet. On a red carpet full of updos, Yeoh's sleek, straight strands were a welcome change.

Where to begin with Chan's head-turning look? There were so many elements worth fawning over. From the hot pink hue to the Victorian-like high collar, Chan and her Valentino dress were a red carpet standout.

The pleating and the pockets were other gorgeous details of this unforgettable dress. It wasn't just about the bright color, although that element was beautiful. Chan also went with a loose updo so her locks didn't interfere with that dramatic collar.

How hard did Awkwafina knock it out of the park with her DSquared2 pantsuit? She was all about accessories with this look — and not just because of the aforementioned clutch-as-flask either. Her bow tie was another fantastic flourish.

Awkwafina's long, beachy waves were the epitome of effortless glam. She looked like she spent the day surfing before getting ready for the Oscars. What a beauty.

Dashing? Dapper? Debonair? The answer is "yes" to all of the above regarding Henry Golding's Oscar tux. His white bow tie was a solid replacement for a standard black one.

While all of the cast members weren't at the Oscars, the ones who did attend brought all of the style.