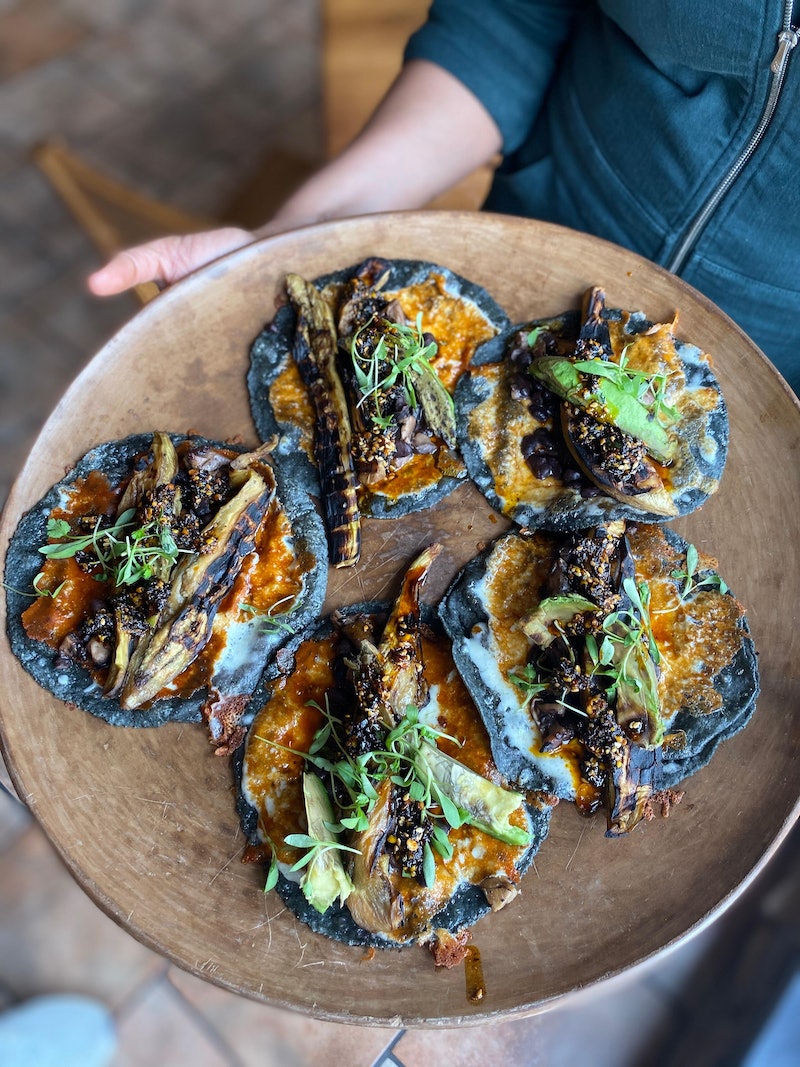 In Hulu's Taste the Nation, author and chef Padma Lakshmi takes audiences on a journey across America to explore the diverse immigrant cultures that shaped American food into what it is today. From Mexican to Thai to Persian cuisine, Lakshmi travels to several unique locations to explore the connection between food and history — and luckily for us, the Taste the Nation restaurants featured in each episode are all places you can visit. Below are the cities she visits, and the restaurants and food stalls she hits up along the way.

In Episode 1, Lakshmi travels to El Paso, which is around 82% Latinx. She first grabs a burrito at Jalisco Cafe, which serves burritos the traditional way with just beans, meat, and eggs.

She then visits H & H Car Wash and Coffee Shop, where she watches them make chile rellenos. Finally, she meets Rico Torres, co-owner of Mixtli, an upscale Mexican restaurant.

In Episode 2, Lakshmi dives into the history of hot dogs and how they were brought over by German immigrants.

She first goes to Usinger's Famous Sausage. Later, she visits Kegel's Inn, an authentic German restaurant, and checks out German Fest, which usually happens in the city in late July.

Episode 3 features Lakshmi exploring her own cultural Indian food within New York City. DJ Rekha and her stop at Maharaja Sweets and Snacks in Jackson Heights, and later she visits the NY Dosas cart in Washington Square Park. She also meets up with author and chef Madhur Jaffrey, who's written several cookbooks about Indian cuisine.

In Episode 4, Lakshmi meets a Gullah Geechee community in South Carolina, the name of the people who are descendants of the West Africans who were enslaved on plantations. She visits My 3 Sons of Charleston restaurant, which features Geechee cuisine. She also meets historian Michael Twitty, who teaches her how to make red rice, and BJ Dennis, who can be hired as a personal chef and caterer. She ends her journey at Bill Green's Gullah Grub.

In Episode 5, Lakshmi goes to Chinatown in San Francisco and meets up with comedian Ali Wong. They first visit R&G Lounge, and then go to Yank Sing with restauranteur and chef Cecilia Chang. She then cooks with chef Brandon Jew, who owns the upscale Mister Jiu's restaurant.

In Episode 6, Lakshmi learns about the thriving Iranian food scene in LA. They first point out Attari Sandwich Shop, the first restaurant in Persian Square. She then visits Hamid Mousavi's Shamshiri Grill, where she learns about the art of the kebab. She ends the trip with a visit to Tehran Market in Santa Monica.

In Episode 7, Lakshmi meets several Native American chefs and discusses the struggles that indigenous communities face. She tries out frybread at the Yellowman Fry Bread food truck, and meets up with chef and healer Felicia Ruiz, owner of Kitchen Curandera; you can actually book a healing session with Ruiz on her website. Lakshmi also cooks with Diné chef Brian Yazzie, who can also be booked for catering.

In Episode 8, Lakshmi checks out Little Lima in Paterson. She first visits Peruvian restaurant and bakery Los Inmortales, and then stops at Erik Ramirez's upscale fusion food restaurant, Llama Inn. She also cooks in the Lomo Truck, a Peruvian food truck that drives around the New Jersey area.

In Episode 9, Lakshmi heads to Las Vegas, where there's a thriving Thai immigrant community. She stops by Bangkok Plaza for pad thai drive through, and then meets Dan Coughlin, owner of the fancy Le Thai. Finally, she visits Lotus of Siam, which specializes in Northern Thai cuisine.

Lakshmi ends the season in Hawaii, learning about poke and how Japanese cuisine has shaped the island. She tries poke with Guy Tamashiro of Tamashiro Market, and then hops to Senia, an upscale Honolulu restaurant. She then makes sushi with chef Keiji Nakazowa, who owns the sophisticated sushi counter Sushi Sho.

Lakshmi's whirlwind tour around the United States perfectly illustrates how immigrants have made this country what it is today, from its varied history to its endless amount of traditional cuisines.