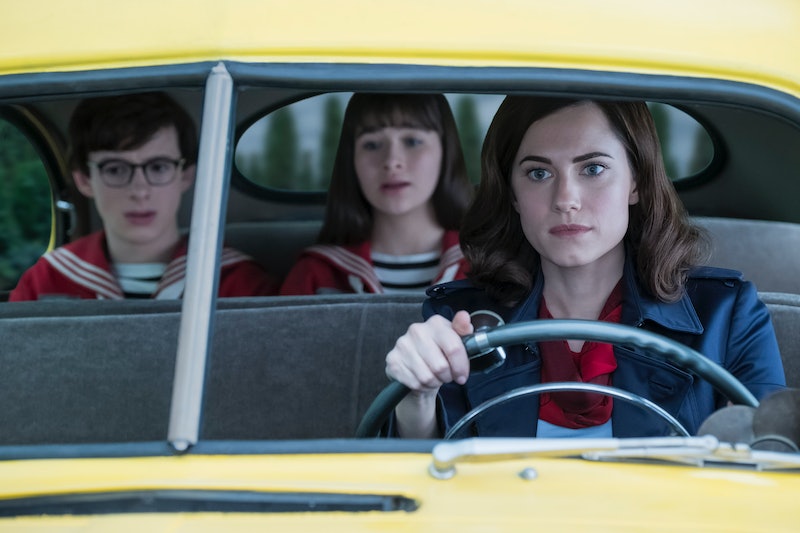 Spoilers ahead for A Series Of Unfortunate Events Season 3. Enigmatic adults pop in and out of the lives of the Baudelaire orphans like a confusing and extremely high-stakes game of Whack-a-Mole. One of these adults, Kit Snicket, played by Allison Williams, first appears at the very end of Season 2, and becomes a main character by Season 3. One of the trademark aspects of A Series of Unfortunate Events is that people — adults in particular — are often not exactly who or what they appear. But Kit is a rare exception.

Kit was first spotted in the Season 2 finale, although her name had yet to be revealed at the time. She arrived at the burning Caligari Carnival, just a few moments too late to be of help to the Baudelaires. She appeared to be driving Jacques's taxi, and Lemony hinted that she "was a woman he knew very well," all of which enforced the idea that she had some strong connection with the Snickets.

While non-book readers might have thought it could be a love interest — the long-lost Beatrice, perhaps? — book readers would most likely have picked up on the taxi and the comment as hints that it could be one woman only: the third and final Snicket sibling, Kit.

Kit is a member of V.F.D., and in Episode 1 of Season 3, it's clear that she was the one who took the Sugar Bowl out of the burning kitchen of Hostile Hospital. While on her dangerous mission through the Mortmain Mountains, two important things are revealed that set up the plot for the rest of the season. First, Kit loses the Sugar Bowl while she's swimming through the frozen stream. Second, she's pregnant. If there had been any doubt in book readers' minds about her true identity, this second revelation would have made her real identity abundantly clear.

By the end of Episode 4 and beginning of Episode 5, Kit finally meets the Baudelaires and gives them her real name. She seems like a kind and decent person; she even offers the Baudelaires the chance to go with Mr. Poe rather than lead the dangerous lives of volunteer fire fighters. In the end, however, she drives them to the Hotel Denouement and gives them an official V.F.D. assignment of their own.

Then, for a moment, it seems that Kit might actually be a wicked person, as she kisses one of the Denouement brothers who is definitely not Friendly Frank, which means it must be Evil Ernest. Ultimately, however, it's revealed that there is in fact a third (and also friendly) Denouement brother, Dewey.

The biological father of Kit's baby is never explicitly revealed in the books. It is most likely Dewey, as the two of them were clearly in love and in a relationship, planning to raise the child together. However, there is some allusion to the fact that it could be Count Olaf, as Kit and Olaf also had a relationship at some point in the past. But, much like the contents of the Sugar Bowl, the Snicket baby's exact paternal lineage isn't really all that relevant. There are some mysteries that will never be solved, and don't need to be.

Of the three Snicket siblings, Kit plays the most active role in the Baudelaires' lives throughout their story. Her sordid past also makes her one of the most interesting characters the children encounter. Like Fernald says in "The Grim Grotto," people aren't either wicked or noble. They're like chef's salads, with good things and bad things mixed together. Kit is definitely a decent and well-read person, but at the end of the day, she — like the Baudelaires, their parents, Lemony, and everyone else — is just like a chef's salad, with both good parts and bad parts mixed together.