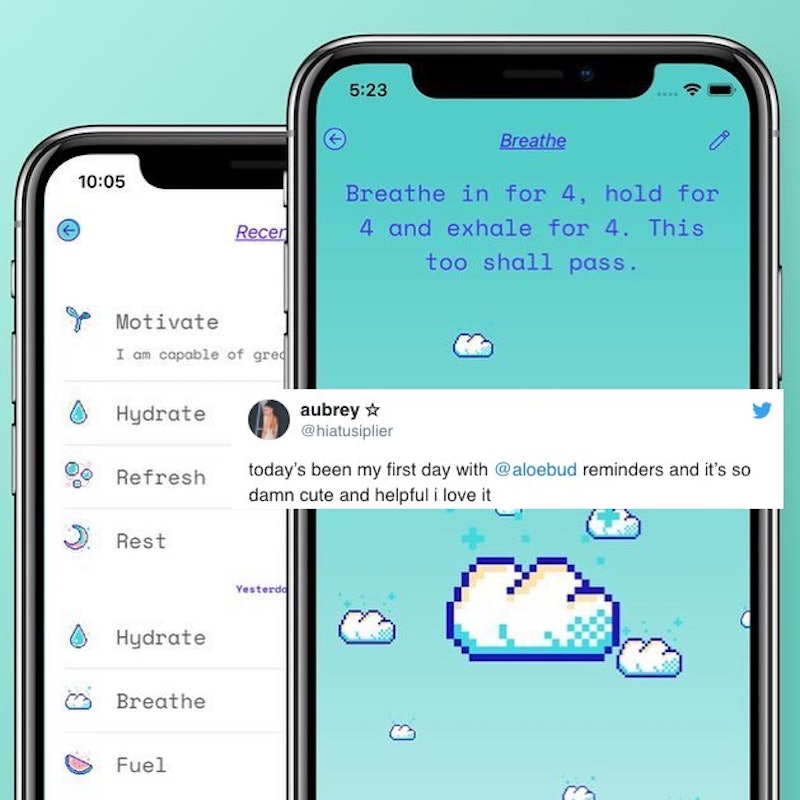 Practicing good self-care is an essential part of keeping myself mentally healthy. But when I'm already in a downswing, remembering basic self-care items like drinking enough water and giving myself a break when I need one can become a seemingly insurmountable task. That's why the newly launched Aloe Bud app for iOS, which was designed to gently nudge users to remind them to complete a variety of self-care activities, is definitely on its way to becoming part of my everyday mental health maintenance.

Aloe Bud was designed by Amber Discko, founder of the online community Femsplain and a former member of the digital organizing team for Hillary Clinton's 2016 presidential campaign. Discko tells Bustle they began working on Aloe Bud because after the campaign ended, "I was trying to get my mental health back together and figuring out what I could build for myself and my community."

They add, "[After the election] I wasn't leaving my house at all. It was really challenging to talk to people about what I went through." Discko tried more traditional self-care tracking methods like journaling, but also went through available self-care apps. "What I found was a couple good apps like Plant Nanny for reminding [you to] drink water. But I felt really guilty because I wasn't using it and my plant was dying."

The apps that were most helpful to them were the ones that offered customization opportunities, Discko says. So that was what they decided to build into their app.

Aloe Bud (which is free with optional paid premium features) is officially billed as "an all-in-one self-care pocket companion app [that] gently brings awareness to self-care activities, using encouraging push notifications, rather than guilt or shame." In practice, it's a friendly-looking app with pixellated art featuring nearly a dozen self-care activities, including Breathe, Hydrate, Rest, Refresh, Stimulate, People, and Fuel. For each activity, users can check in or write a reflection. Push notifications are highly customizable — if you don't resonate with the options Aloe Bud offers, you can write your own. Users can set times to receive push notifications, and Aloe Bud advises setting them "intentionally and sparingly" for the most effective results.

One extremely awesome aspect of the app is that it's chock-full of positive language. For example, in the Motivate tab, selecting the option to write a reflection causes this prompt to pop up: "What's something you'd like to accomplish soon? Big or small, all we can do is try."

Language was one of the design elements Discko especially concentrated on during development, they tell Bustle. "Months were spent researching and conducting surveys to see what words we respond best to," they explain. "We're being careful about not using triggering words." Part of that is using words like fuel instead of food. "Fuel you associate with energy, and it's a positive association to feel energized. Same thing with Refreshed — we don't want to shame people if they haven't been super adamant about their hygiene. It's supposed to be an encouraging, gentle nudge," Discko says. "We don't want it to be someone judging you."

Discko adds that their team is working on creating different reminder tones "if folks need a more direct message or firm message — still not guilting, but maybe a little more. 'Do this now,' versus, 'Do it when you can.'"

Aloe Bud launched in the App Store on April 25, and Discko says it currently has about 5,000 active users. As for whether or not there will be an Android version of Aloe Bud, Discko says they want the app to be available on every platform, but will have to see how things shake out when it comes to funding development. For those who have an iPhone or iPad, though, Aloe Bud is ready and waiting to offer compassionate self-care encouragement when you need it most.

More like this
19 Latinx Therapists & Mental Health Experts To Follow On Instagram
By Kaitlyn Wylde, Naydeline Mejia and Lexi Inks
Why Everyone Is "Soft Tagging" Friends On Instagram Right Now
By Alexis Morillo
How To Use Hobnob To Host Your Next Party
By Emma Carey
This Psychological Effect Might Be Keeping You From Hitting Your Goals
By Lexi Inks
Get Even More From Bustle — Sign Up For The Newsletter