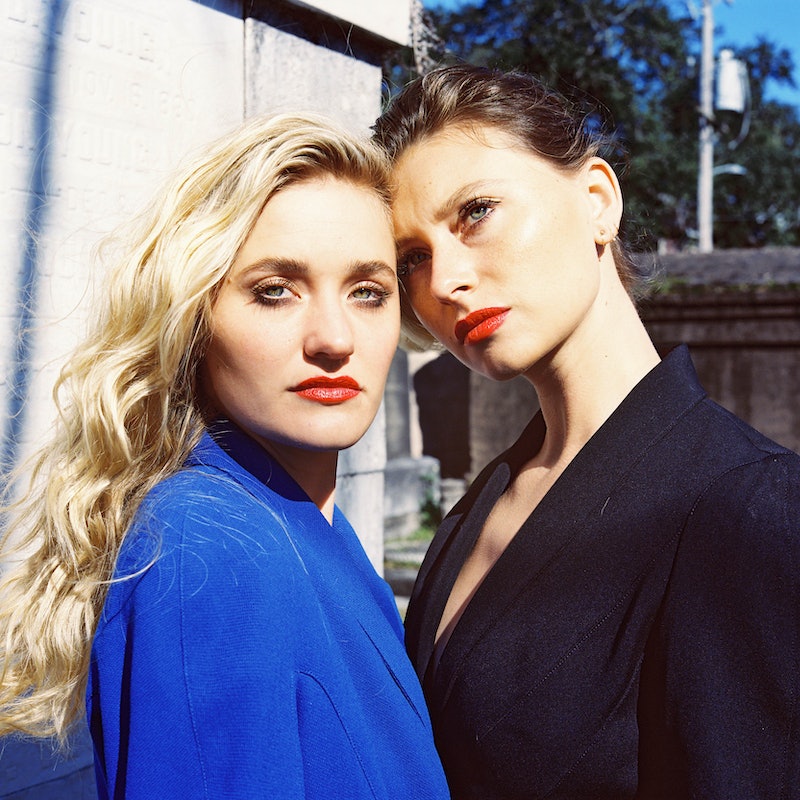 Two years after their last EP and 12 years after their last album, Aly & AJ are back with new music, releasing a new EP, Sanctuary, later this year. "We didn’t necessarily plan [to have a decade between] this and our last [album]," Aly says, speaking via phone with her sister the night before the Mar. 29 release of "Church," the record's new single. "It just happened this way.”

It's not like they weren't busy within that time period. After Insomniatic's 2007 release, the duo — who got their start on the Disney Channel in the mid-'00s — went on tour, moved into their own houses, and acted in movies and TV shows such as Easy A, iZombie, and The Goldbergs.. But now they're back to music, and they're so excited to release these new songs. “This new iteration of our music is such a huge breakthrough for us as both artists and songwriters," says Aly. "We are [finally] able to speak our minds and truly formulate ideas."

Sanctuary indeed reflects a more mature side of the duo's lyrics, and they say that they've grown in other ways, too. "I think the quality of our music has strengthened," says AJ. "We are more open to collaborating with other people... and we're more open to ideas across the board."

“Church” perfectly reflects this new stage of the duo's career. The single's lyrics capture the complexities of adulthood and faith, with the sisters singing, "For all the times I can't reverse/for all the places where it hurts" and "I need redemption/for sins I can't mention." When asked to describe their new music, Aly calls it "sure and confident," adding that the duo "finally feel grounded and comfortable" to release songs like "Church."

In May, the sisters will embark on Sanctuary Tour, and they're collaborating with The Trevor Project, an organization for at-risk queer youth, to have donation bins and awareness booths set up at every tour date. "Our music is a sanctuary for our fans to be who they are and with who they want to love," says AJ. "We want our fans to know we're dedicated to letting them be who you are."

And the duo are always looking for ways to connect with their audience. "We find a lot of peace and healing comes with talking to [fans] while on tour," explains AJ. "Hearing their stories about how they came to our music or how it impacted their life — it really touched us, and we wanted to give something back.”

As they've grown older and moved on from their '00s roots,, so much has changed for the duo. "Our schedules are definitely crazier now. We live in separate houses now. We have two careers to navigate now," says Aly. But what hasn't changed is the fact that they both agree that the love they have for their listeners is the driving force behind their creative process. Says AJ, "I'm just so excited to see our fans again."

The sisters explain that their biggest hope for the coming months is that their love for their new music comes across, both on tour and in the songs themselves. "I hope that people feel that the intensity and passion that we have for our music," says AJ. "When you release new music, you’re shedding your soul in your material. It’s a vulnerable position and I hope people witness that we’re here to stay."

Aly expands on that vulnerability, saying, "We are independent artists. And at the end of the day, this process takes a lot of time, work, and rejection. A lot of this comes out of our own pocket. When our fans are streaming our music, that’s really, truly going into what our next release will be."

It's clear that for the sisters, Sanctuary is not just a new piece of music, but an honest, powerful documentation of a more mature, and exciting new era.

More like this
The Spice Girls Just Dropped A Brand New Music Video
By Sam Ramsden
Everything To Know About Taylor Swift’s 10th Studio Album, 'Midnights'
By Grace Wehniainen and Jake Viswanath
Mariah Carey Is Releasing Her “Lost” '90s Grunge Album
By El Hunt
Craig David Is Still Slicker Than Your Average
By Olivia-Anne Cleary
Get Even More From Bustle — Sign Up For The Newsletter