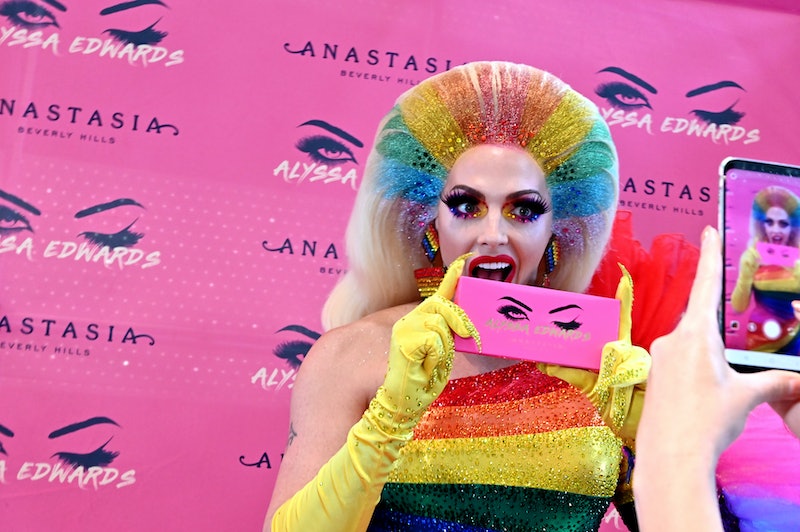 There’s nothing dull about meeting a drag queen up-close for the first time, especially if that queen is Texas-made tongue-popper Alyssa Edwards. Thanks to the Alyssa Edwards x Anastasia Beverly Hills palette, her face is beat for the beauty gods when she greets me — eyes decorated with rainbow shadow (no doubt from her palette) and colorfully coordinated rhinestones. In a stale room surrounded by four beige walls, Edwards is the pop of color, wearing a rainbow crystal mini dress and matching stilettos. The drag queen sits with me on a muted couch in her colorful getup, and it's nearly impossible to tear my eyes off of her for even a second.

Head-to-toe, Edwards commands the room. From her rainbow streaked, bumped-up blond hair to her big ocean blue eyes (which she later tells me are her second greatest physical attribute), Alyssa Edwards has arrived — and in Swarovski crystals, no less. But for someone who regards their drag style as “over-the-top,” “extra,” and “Texas-sized,” Edwards still humbly enjoys the ride of the success, including being the first celebrity collaborator for an ABH eyeshadow palette.

"This is very different for ABH, but they weren’t afraid," Edwards tells me. "This brand is an inclusive brand that loves and celebrates the art of beauty. Beauty isn’t a gender, a color, and it’s not necessarily just a human, but I’m very grateful and thankful that the people behind the making of this were so on board with all things Alyssa Edwards and ABH." Launching just before Pride Month on May 29 with a $45 price tag, the Alyssa Edwards Palette offers a blast of color for any bold eye look.

The cliché around meeting your heroes is that you shouldn't because they may not measure up to your expectations in person. But as someone who repeatedly watched Edwards' season of RuPaul's Drag Race on bootleg spammer sites, I realize the person exclaiming “Back rolls?” from the television out of drag is the very same person sitting in front of me who “morphs into this Power Ranger,” remaining just as fearless and ready for everything as if she were still competing for the crown. Every time she pauses and continues her sentences with a baby tongue pop, it’s clear to me that Edwards is a pageant pro — not without a humble beginning, mind you.

Edwards recalls her first time on stage after seeing a flyer for an open mic drag night where she mentions she had her ballet and jazz shoes, but no wig and no stage name.

Edwards says she went back and forth with the MC about her name versus her stage name until she finally said she "didn't have one yet."

"She [The MC] said, 'Well doll, you got about two minutes,' and so I didn’t even have to think and said 'Alyssa" she says. "I grew up watching Who’s The Boss? with Alyssa Milano. I got on stage and I actually won that night."

The Alyssa Edwards Anastasia Beverly Hills palette is another notch on Edwards' belt of successes, along with the dance studio she owns and the Netflix series Dancing Queen documenting life there. With every word, pause, and shocked facial expression she gives while telling me of her journey, Edwards never breaks our eye contact, and I know her own surprise over her success story is genuine.

"It’s like, is this a dream? Like c’mon now God, what we got going on up in here? How did this happen to me?" she jokes, adding seriously. "I am savoring the moment."

"[The names of] all of these shades really mean something to me," she says. "Like my Unicorn Tribe is my dance family. H.O.E. — I know that sounds funny — but that’s Haus of Edwards. That’s my family. And you know, we can choose our family."

Edwards explains that growing up Mesquite, Texas, she didn't feel like she fit in with all the other little boys. Instead, the drag star spent a lot of her time with her granny in church, but ultimately found her calling in the dance world. Eventually, Edwards began her own studio in Mesquite known as Beyond Belief Dance Company, which is also a shade name in the palette.

"The very first time I felt confident, the very first time that I felt like I could conquer the world, was when I had makeup on," she says. "I know that sounds strange, but Clark Kent had to have a costume and I’m no different. This is my costume."

Makeup helped a young dancer turned dance teacher find confidence, and Edwards hopes others will find theirs with her eyeshadow palette.

"This is something that I hope when every human or — what’s the word I learned?" she yells into the other room to her glam squad, to which they reply in unison: "Extraterrestrial."

Edwards repeats her statement: "This is something that I hope when every human or extraterrestrial being puts it on that they feel something."

However, at the end of the day, Edwards wants people to find their own version of beauty within her palette.

"Makeup is art and art is subjective. Create your own," Edwards says. "Worst case scenario is you just go wash it off and start over. I mean, have fun with it. There’s really not a right or a wrong, especially nowadays."

She adds, staring intently and pointing at me so even I can feel the gravity of her words, "I’ve learned too as a drag performer that there’s no right or wrong way. You get to carve out your idea, your fantasy. You get to make that."