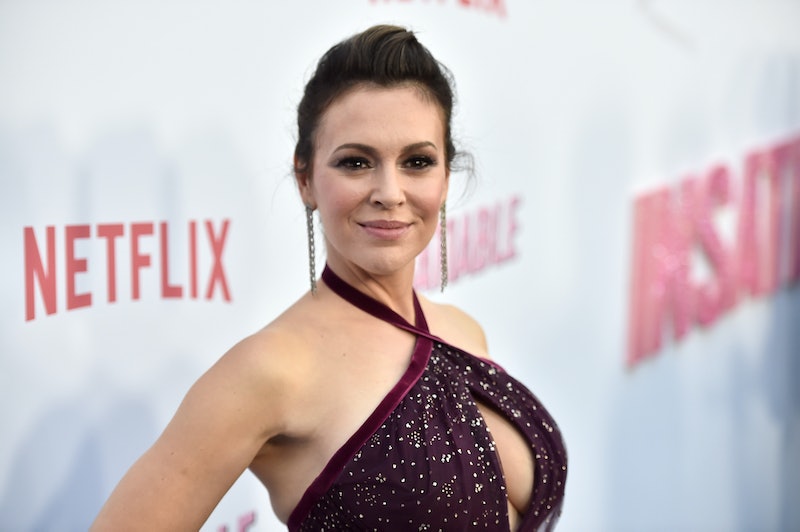 Tension has been brewing between the original Charmed cast and its 2018 revival counterparts for almost eight months. Now, with the CW's revival debut not too far off (October 14, for those who'd like to prepare), buzz over the new series has picked up again. And judging by Alyssa Milano's comments on the Charmed reboot, which the actor originally shared with Entertainment Tonight, it doesn't sound like things have cooled down just yet, as far as the original cast's upset is concerned. At least, not entirely.

According to ET's report, Milano told the outlet that she hopes the reboot does its part to bring the magic of Charmed to a whole new generation of viewers. But the actor isn't thrilled about the extent to which the original Halliwell sisters have been ousted from the new series and its development. Speaking to ET, Milano said,

"I wish that they would have come to us and we would have been involved since the beginning. But having said that, I do hope that it reaches the newer generation and impacts that generation the way ours was able to do for its generation."

As ET noted in its original report, it doesn't sound like Milano wants to be involved in The CW's reboot series. Responding to an inquiry about whether or not she'd consider taking on a directing role — or appearing for a brief cameo, even — Milano told the outlet she "thinks that ship has sailed." A little bit more directly, though, the actor replied, "I don't think so." And much as veteran Charmed fans might like to believe the actor might be willing to change her mind on that front, Milano's earlier comments to ET about her thoughts on the reboot suggest she's probably not going to.

Fans who've been following this year's Charmed-related updates know Milano is certainly not the first Halliwell sister to voice her upset about the upcoming reboot series, and how its new network is handling the project. Back in January, when The CW first green-lit the series, it described the revamp (which touts a new headlining cast of witches) as a "fierce, funny, feminist reboot of the original series" that "centers on three sisters in a college town who discover they are witches."

And while it certainly is exciting that Charmed fans in 2018 will get to see the series' new trio of spellbinding sisters "tearing down the patriarchy" and "vanquishing supernatural demons" — as the series' descriptor went on to say — in between classes, the original sisters did take issue with some of the phrasing. Those wondering why, exactly, should probably take a look at Holly Marie Combs' (AKA Piper Halliwell) explanation from several months back. In a lengthy message posted to Twitter on May 22, Combs hit the nail on the head.

"Let me say first that I appreciate the jobs and opportunities the Charmed reboot has created," she wrote, starting off the tweet. "But I will never understand what is fierce, funny, or feminist in creating a show that basically says the original actresses are too old to do a job they did 12 years ago." After adding that she hopes the revival series itself is better than its "marketing," Combs seemed to sum up the crux of the original Charmed cast's upset in just a few words.

"Reboots fair better when they honor the original as opposed to taking shots at the original," she wrote. In other words, by billing the Charmed revival as a "fierce, funny, feminist reboot" of the original, The CW's description — while it might've been completely inadvertent — does seem to at least overlook the fact that the original series was pretty fierce, funny, and feminist, too. Combs addressed that issue pretty directly in a tweet earlier this year, not too long after The CW announced the reboot series.

Around the same time, Shannen Doherty (who Charmed fans will remember from the show's earlier seasons as Prue, the eldest Halliwell sister) took to social media with some similarly peeved comments about the revival. In them, Doherty was fairly straightforward about her distaste for The CW's "fierce, funny, feminist" description, as well as for the reboot in general. Amid a Twitter exchange with some fans, Doherty called the description's wording "terrible and a bit offensive," though she added that "everyone makes mistakes" and "perhaps with the backlash [the network] will be more thoughtful in [the] future."

Just last week, on August 7, Jennie Snyder Urman (one of the reboot's executive producers) responded to the backlash, specifically addressing Comb's January criticisms, wherein she said that Charmed "belongs" to the original sisters. According to a report from TV Guide, Urman said,

"Of course we can empathize [with her]. It was a huge part of her life and if [she's] watching it go in a different direction, then of course that's going to be hard. I understand that."

Whether or not the Charmed revival will live up to the extraordinary legacy set forth by the OG band of Halliwell witches remains to be seen. That said, living up to such a lofty legacy probably won't be easy, and fans who've been around since the beginning know that it'll never replace the original, but it deserves a chance to be its own thing.