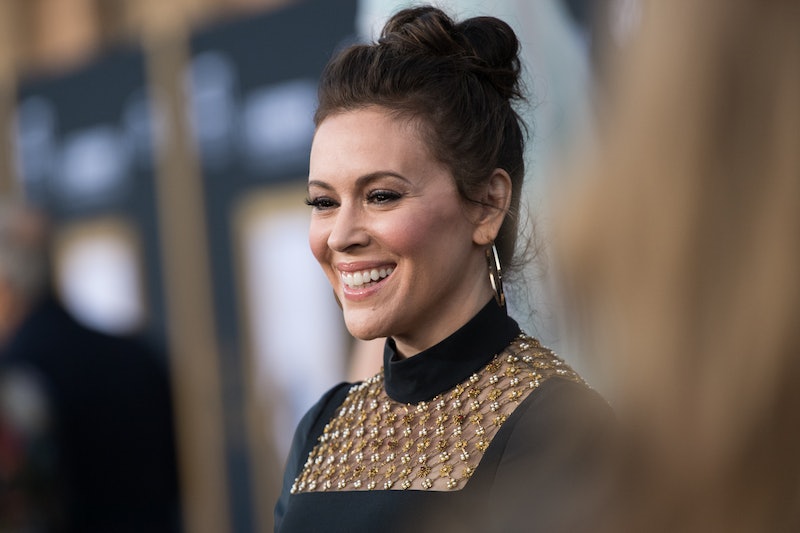 Frustrated over anti-abortion legislation recently passed in Georgia, actress Alyssa Milano has called for a sex strike, urging her supporters to stop having sex until women are given bodily autonomy. But while some applauded Milano's "sex strike," a number of people criticized it as counterproductive and ultimately harmful to LGBTQ+ people's role in conversations about abortion rights.

"Our reproductive rights are being erased. Until women have legal control over our own bodies we just cannot risk pregnancy," Milano tweeted Saturday. "JOIN ME by not having sex until we get bodily autonomy back. I'm calling for a #SexStrike."

The concept of using sex as a bargaining chip or form of protest isn't new. Rather, it can be traced back as far as 411 BC when Aristophanes' ancient Greek comedy Lysistrata, which centered around one woman's efforts to end the Peloponnesian War by convincing all women to deny sex to all men, debuted.

While Milano may have intended for her "sex strike" to be a form of resistance against anti-abortion laws, her call was supported by anti-choice activists like Live Action founder Lila Rose. "I'm totally with you, @Alyssa_Milano, on not having sex," Rose tweeted to the celeb. "But the issue isn't 'reproductive rights.' The issue is reproductive responsibilities & fidelity."

Others, however, weren't keen on Milano's idea at all. "What is a sex strike going to do besides reinforce patriarchal notions that women have sex only to please men?" Rewire.News' senior legal analyst Imani Gandy tweeted Saturday. "Lysistrata is not an effective organizing tool. Instead, f*ck whomever and support abortion funds."

In a thread of tweets, Wear Your Voice editor-in-chief Lara Witt argued that using a sex strike as a means of bargaining for abortion rights was "counterproductive" as it served to erase LGBTQ+ people from discussions on abortion and centered solutions on cis and heterosexual sex. "As poor/working class women, Black, indigenous and WOC repro rights/repro justice advocates and activists have said for years, access to abortion is very much a matter of class/wealth/poverty/gender/race and 'solutions' like Alyssa Milano's are reductive and infantile," Witt tweeted.

Others argued that in calling for a sex strike, Milano was reinforcing erroneous ideas about female sexuality. "Living under patriarchy has already robbed me of safety, autonomy, opportunities, and trust in our institutions," author Kristi Coulter tweeted. "Now I'm supposed to give up sex, too, and play into the fiction that it's just a bargaining chip/transaction for women? Love you, but nope."

Attorney and self-proclaimed feminist Kate Kelly, however, disagreed and threw her support behind Milano. "Another way to say 'Bribing men for equal rights with access to our bodies' is: Using our bodily autonomy to communicate an effective message & recruit men to help change policy," she tweeted in response to criticism of the sex strike. "And, yes. That's how feminism works."

Along with calling for a sex strike, Milano has also advocated for a film industry boycott of the state of Georgia. According to BuzzFeed, the actress recently said she would "fight tooth and nail" to move filming for the next season of her Netflix comedy Insatiable to another state. "If it doesn't move to another state, I will not be able to return to the show if we are blessed with a third season," she told BuzzFeed. "This is my leverage. I will use it for the betterment of society and our great country."