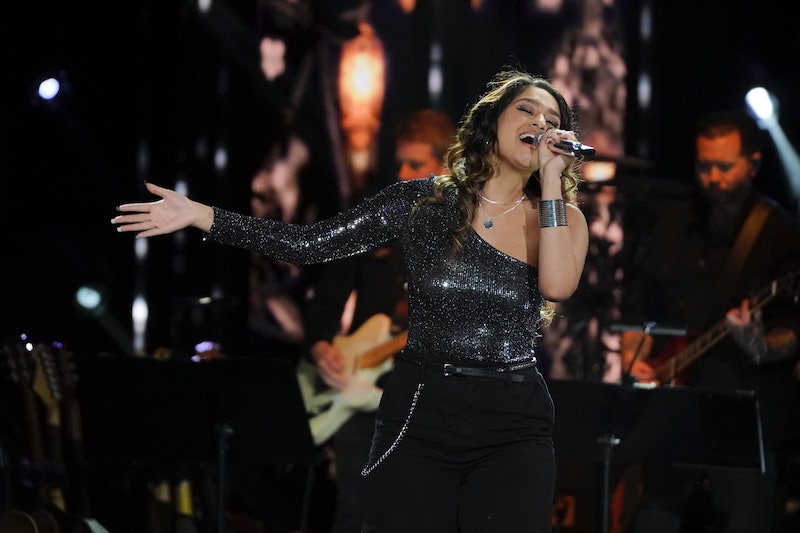 Not every singer has the courage and confidence to put themselves out there and audition for American Idol, and yet, 16-year-old Alyssa Raghu did it twice. After surpassing her Top 24 spot that she secured in Season 17, Raghu is, according to GoldDerby, the first Idol contestant in the show's history to advance to the semi-finals twice. And this time, she hopes to make it all the way.

Raghu, "like the sauce," was eliminated last season after Katy Perry said her stage presence was "a little forgettable," even though her voice was impressive for her age. When she went back to audition for a second time, she told the judges that she took their critiques very seriously.

"Since getting eliminated last season, I took everything the judges said to heart because I knew it was important," she said on the show. "I didn't come this far to only come this far."

After she was eliminated, Raghu hit the ground running to make improvements — she said she took vocal and dance lessons to improve her stage presence, and practiced by performing live over 200 times. She also started a home school program in order to have more time to focus on her singing. Talk about dedication.

"You told me I had to figure out who I was," she told the judges during her second audition. "I'm Alyssa Raghu and I'm a pop star." Last season, she blew the judges away with a version of Ariana Grande's "Almost Is Never Enough," and she definitely has Grande potential. After her performance of Meghan Trainor's "Dear Future Husband," the judges told her that her voice and body have never been more connected, and that she was finally moving and grooving across the stage with ease. They invited her to the Top 20. And after singing a vulnerable celebrity duet with Julia Michaels to the artist's song "Issues," Raghu officially became a member of the Top 14. Her perseverance paid off, and she made it to the live shows, which begin on Sunday, April 14.

"Oh my God. First off, thank you for believing in me," she wrote on Facebook. "This was always my dream, to make the live shows. I've worked really hard since last season to improve and show that you can fall really hard and get back up and achieve your goals in life. I'm so grateful for all of you. I promise I'll make you proud, thank you again. I know I'm still a kid, but I wanna change the world through music. I love you. I'm so humble to accept the opportunity and you all have made me the happiest kid in the world."

Raghu told the judges she came back to win, and so far, she's keeping her word. Watching her on stage and in conversation with everyone on the show, it's easy to forget that she's only 16. She's incredibly mature and driven. So if she doesn't win this time, there's no doubt she'll find another way to follow her dreams.