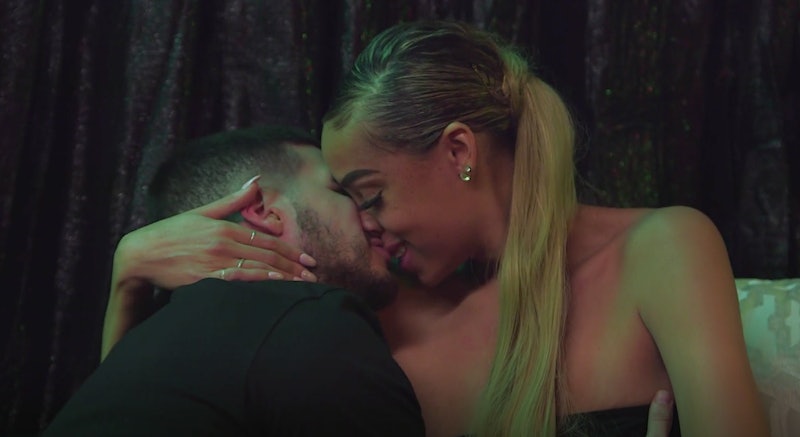 It's still early, but it looks like Alysse from Double Shot at Love is a frontrunner for Vinny's heart. And even if she doesn't end up with him in the end, she'll at least make him laugh along the way. The backup dancer from Brooklyn, New York has an incredible sense of humor that she hasn't yet shown off on the MTV series, but one glance at her social media hints there's a lot more to her than what we've seen.

After a night of dancing at the house emceed by none other than Pauly D himself, Vinny and Alysse hung back while Pauly escorted the rest of the girls out. Vinny was happy to see her open up a bit to him at the bar, considering she's been kind of quiet so far. He said that he loved that she was a dancer, because "a woman that can dance has rhythm," which "makes you good in bed" and comfortable in your own skin." And he said he liked her "low-key" personality, too.

And despite a potential setback (Alysse straight-up told Vinny he wasn't her type), they had a good conversation about past relationships. Eventually, Vinny leaned in for a kiss. "Alysse is making me feel comfortable; she's touching me," he said. "I'm not saying I'm in love with the girl — I just met her — but I really like her."

Considering she almost went home the night before, Alysse felt good about how things went with Vinny and seemed glad that she decided to come out of her shell a bit. On social media, she remains a bit reserved, considering her main Instagram is private. But she runs two other accounts that show off different sides of her: a cooking account that hosts pics of all her amazing food (some recent dishes include bacon alfredo fettuccine and homemade french toast), and a finstagram called Young APac where she posts hilarious memes and videos of herself that show off her funny side.

On her alter-ego APac's account, Alysse shares lots of lip-syncing and dance videos with goofy filters and witty captions, which show that she doesn't take herself too seriously. Her APac character often wears a hoodie and sunglasses, but still shows off those killer moves. For example, she gets down Usher's "Nice and Slow" before lighting a candle, applying lotion and baby oil, and dancing some more with her cats. "When yo girl says she's on her way over," the caption reads. "To be continued..."

Also, try not to watch these videos of her killing a cockroach with a broom over and over again without laughing.

And it turns out dancing isn't her only creative outlet. Check out this recreation of Drake's Nothing Was the Same album cover.

Once Vinny gets to know this free-spirited, silly side of Alysse (or even just looks at her Instagrams), it could really make her stand out and increase her chances of making it all the way. Hopefully, she doesn't take too long to let it shine.