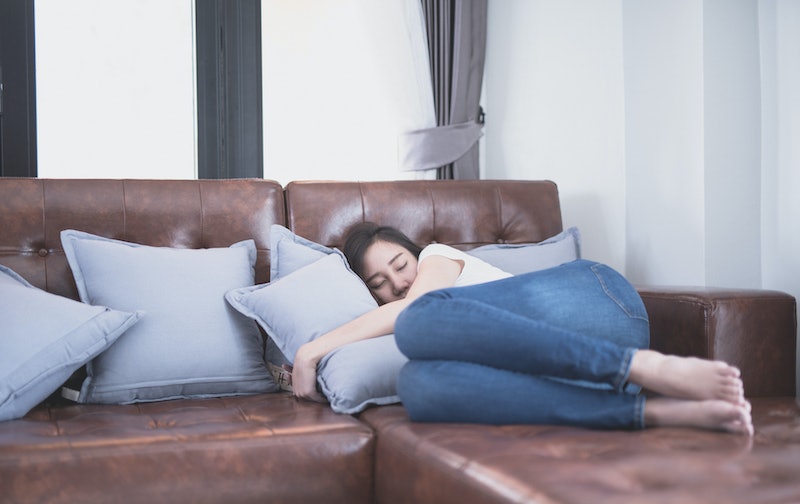 Taking a daily nap when I don't have anything else on my calendar is a time-honored ritual that dates back to elementary school for me — most of my friends grew out of daytime sleeping, but I love a good nap. I've used my lunch break to snooze for 15 minutes before, and my claim to fame is falling asleep for four hours in the middle seat of a crowded plane. I usually joke about being always tired, but a new study from JAMA Neurology says daytime tiredness could be a sign of Alzheimer's disease. There's a major reason, however, why you shouldn't be worried about your afternoon coffee habit yet.

For this study, researchers studied 283 elderly people who were already part of the Mayo Clinic Study of Aging, an ongoing research study with more than 3,000 participants. All of the people analyzed in this study were over 70 years old, and about 22 percent of them had excessive daytime sleepiness (EDS). The research team says the results suggest that "those with EDS may be more vulnerable to pathologic changes associated with Alzheimer disease." (Excessive daytime sleepiness was diagnosed using the Epworth Sleepiness Scale, a test where you rate how likely you are to doze off in various situations.) The research team looked at brain scans over a seven-year period and found that those who reported feeling tired during the day had more amyloid in their brains. Amyloid is a protein that can cause plaque in the brain if there's an excessive amount, according to Alzheimer's Association.

It's not necessarily accurate to say that being tired means that you're automatically going to develop a serious disease — a ton of factors contribute to sleep health, and the study's researchers mention physical activity, depression, obesity and hypertension as things that can affect your sleep quality — but this research suggests your brain is less vulnerable to amyloid buildup — and less vulnerable to dementia and related conditions — if you have a healthy sleep schedule. "Because sleep has been proposed to participate in the clearance of soluble [amyloid], disturbed sleep has been suggested to contribute to [amyloid] accumulation," the study says. Researchers only analyzed older people, so we don't yet know how younger brains are affected, but this research is a reminder of sleep's importance. "Self-reported excessive daytime sleepiness in the elderly was associated with increased accumulation of brain amyloid over time. Amyloid deposition in the brain is one of the earliest hallmarks of Alzheimer’s disease," study author Dr. Prashanthi Vemuri tells Bustle. "This study affirms that disrupted sleep may be a risk factor for Alzheimer’s disease via increased amyloid deposition."

Simply put, you have yet another reason to make sure you get enough sleep each night. If you're tired during the day even while getting a good amount of sleep, it could be indicative of a medical problem, and it may be worth talking to a doctor. But if you're grabbing naps because you're staying up too late, it's a good idea to turn in early tonight. Your body needs sleep to keep you healthy, and a decent sleep schedule can help protect you in the long run. The study says that further research should look at whether treatment of excessive daytime sleepiness has any affect on amyloid production and accumulation.

I don't think I'll willingly give up my daytime naps, but I am side-eyeing my body for craving sleep all the time. Why am I so tired in the first place, and does it mean something more serious is going on? I won't know until I talk to my doctor, but I'll definitely mention it after reading this research. It provides yet another reason that sleep deprivation, even if it's unintentional, is a bad idea.