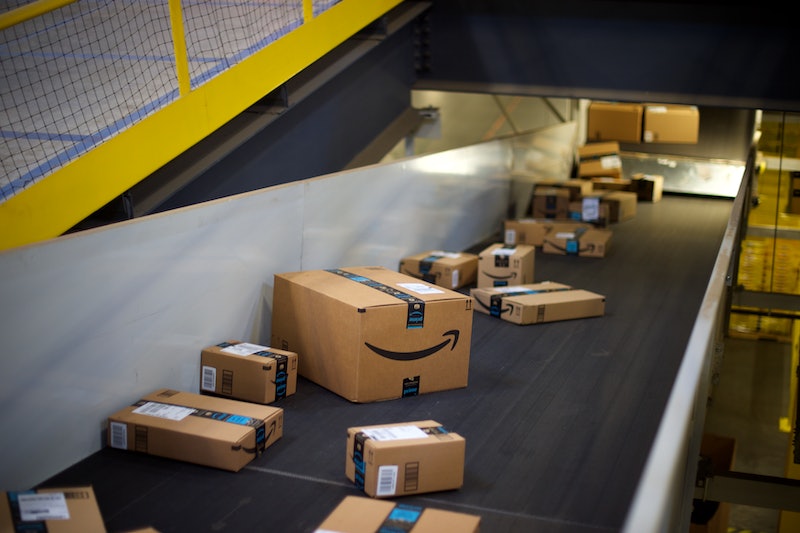 It's hard to resist the siren song of Amazon Prime. Between free shipping (same day shipping, even!) and access to thousands of TV shows, movies, and songs on demand, it's never been easier to get the things you want or need with the quickness. And plenty of other folks are right in that same boat with you: Amazon just reported 7 percent growth, according to TechCrunch. But despite those numbers' being on the up-and-up, Amazon also dropped a bit of news consumers might not be so excited about: your annual Amazon Prime membership fees are about to go up. Sorry!

Amazon's chief financial officer, Brian Olsavsky, announced that the price of a yearly Amazon Prime membership will increase from $99 to $119, according to TechCrunch. The price will go up May 11 for new subscriptions, but if you're already an Amazon Prime subscriber, the raise will kick in for subscription renewals starting June 16, according to a notice posted by Amazon. The post also noted that the price for Amazon Prime Student is going up as well, from $49 to $59. And if you're a pay-by-month member, you likely anticipated this increase, since the month-by-month version increased from $10.99 to $12.99 back in January, TechCrunch reported.

Amazon has raised Prime's prices once before, in 2014, when the service jumped from $79 to $99 for regular subscribers and $39 to $49 for members of Prime Student.

"Since we increased the annual price of Prime four years ago both the value of Prime and the cost to offer it have increased significantly," Amazon said in a statement to TechCrunch.

As for whether or not the increased cost will put a damper on current and potential subscribers' enthusiasm for Prime, it's not likely, according to analyst Doug Anmuth, who wrote in a note to his clients that "we do not expect the company to get much of a pushback from consumers given the increasing value of the service," CNBC reported.

And Anmuth does have a point. Business Insider laid out the various pros of having an Amazon Prime subscription, and it's an extensive list that includes the holy grail of online shopping: Free shipping for almost everything on its site. And that free shipping is combined with its two-day standard for Prime members. On top of the shipping perks, Prime members get access to Amazon's library of movies and TV shows, its library of Prime Reading books for Kindle, Prime Music streaming, free audiobooks from Audible, Prime Photos, which allows unlimited photo storage, access to Twitch Prime, access to exclusive deals and exclusive products on Amazon's site, and a Visa card that gives members 5 percent back on their Amazon purchases.

On the contrary, Business Insider said certain perks may not be as excellent as they seem on the surface level. Prime Music offers two million songs, but "Amazon's Music Unlimited is more of a competitor to Spotify, Apple Music, and Google Play Music but the premium service costs an additional $7.99 a month for Prime users," Business Insider reported, adding that Amazon Video doesn't stack up to Netflix and Hulu, noting that "[m] any shows and movies are only available to rent or buy" even with a Prime subscription.

The primary perk of Amazon Prime is undoubtedly the shipping benefits, but Business Insider noted that folks may not want to shell out for a yearly subscription if they don't actually purchase many physical items from Amazon. The service can be invaluable for folks who purchase a large number of products, or for someone like a student, who may need to ship heavy textbooks several times a year and will exceed the $119 membership price tag in shipping costs.

Still, for others, $119 may simply be too much to swing — especially as the service enables you to purchase more items.