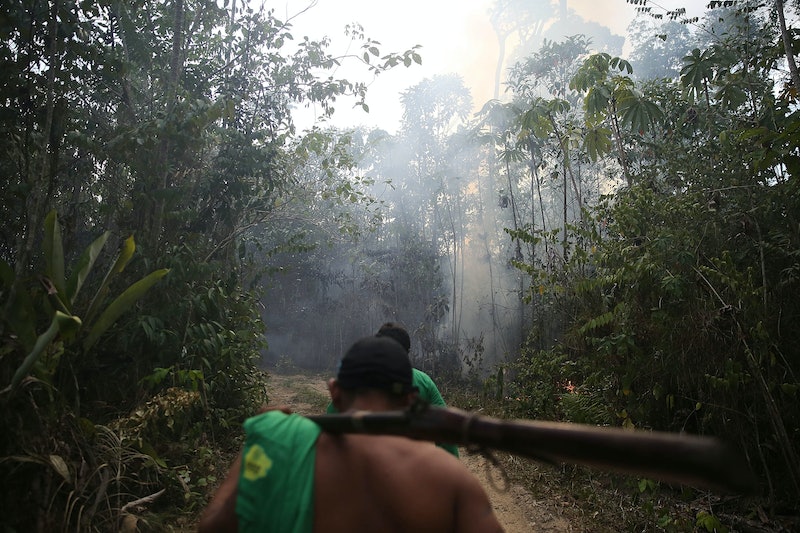 Frightening pictures and videos have been circulating the internet this morning, showing what some have described as "apocalyptic" conditions in Brazil. The Amazon rainforest is currently experiencing wildfires that are leading to heavy smoke. This smoke is heading to the cities, covering the skyline of São Paulo in a heavy, dark smog. But what's the cause of these conditions? Here's what happened, how it got so bad, what experts tell Bustle can happen if these fires continue, and what you can do to help.

On Monday, Aug. 19 the sky above Brazil’s largest city, São Paulo, suddenly went dark with smoke at around 3 p.m., local news reported. The smoke also reached parts of the Brazilian states Mato Grosso do Sul and Paraná and went on for more than an hour. The fire and smoke was so intense that they could be seen from space, according to the National Aeronautics and Space Administration (NASA). Much of this smoke came from wildfires in the Amazon rainforest, even though CNN points out that São Paulo is over 1,700 miles away from the fires.

Through interviews with scientists from national institutions, Folha de S. Paulo newspaper attributed the smoke to a cold front and wildfires in bordering countries of Paraguay and Bolivia — where more than 471,000 hectares of forests and crops were burned, according to nTV7 News. Folha de S. Paulo also points out that this year alone, Brazil’s National Institute for Space Research (INPE) says Brazil has seen the highest number of forest fires since 2013, with 71,497 fires burning as of Aug. 18. And in August alone, there have been 32,932 fires, a 264% increase from 2018. The state of Mato Grosso do Sul has endured the highest number of fires (13,641) and the steepest increase from 2018 (88%).

Euro News reported that these fires have led to Amazonas — the largest state in Brazil — declaring a state of emergency. And in 2019, Brazil has seen a record-shattering number of wildfires. According to the Telegraph’s analysis of deforestation data, released on Aug. 21, from Brazil’s National Institute for Space Research (INPE), there has been an 83% increase in deforestation since 2018. This interactive map from INPE shows the extent of deforestation in the country. Analyzing INPE's data, CNN says that "more than 1½ soccer fields of Amazon rainforest are being destroyed every minute of every day."

Combined with the cold front, the smoke from ongoing fires produced a chilling effect on the sky, one that both scientists and residents said was not normal for the time of day or time of year.

Brazil is not the only country facing this problem, even though the nature of the Amazon (we'll get to this later) makes the stakes immeasurably higher in this case. Vox points out that Siberia, the Canary Islands, Alaska, Greenland (which also lost 217 billion tons of ice in July), and California have all faced wildfires in 2018-2019 that have displaced people, led to human health problems, and altered the regions’ ecologies.

Why Are All These Wildfires Happening?

Although wildfires are a natural part of many ecosystems, the Amazon rainforest is actually fireproof. Well, at least, it used to be fireproof. But as The Washington Post points out, the climate crisis — inflamed by rising levels of deforestation and carbon emissions — has led to more frequent and destructive wildfires. And those wildfires are increasing in both frequency and intensity, according to research published in the journal Nature Communications.

According to British scientists writing in The Conversation, “Wildfires in the Amazon are not natural events, but are instead caused by a combination of droughts and human activities. Both anthropogenic climate change and regional deforestation are linked to increases in the intensity and frequency of droughts over Amazonia.”

So, these rainforest wildfires are the result of human activity. And the government of Brazil isn't doing much of anything to help the situation. In fact, they're actually making it worse.

What Brazil's Government Is Doing

Since current Braziliant president Jair Bolsonaro's 2018 election campaign, Indigenous leaders from the Amazon tribes have said that his violent anti-indigenous rhetoric would result in disaster for their community. In addition to defunding and dismantling Funai, an agency created to protect the approximately 305 indigenous tribes in Brazil, Bolsonaro has allowed rapid deforestation of the Amazon and raiding of protected indigenous lands. Regarding Bolsonaro, Felipe Milanez, professor of humanities at the Universidade Federal de Bahia, told National Geographic, “His economic project is to destroy the Amazon, to transform the Amazon into commodities for export."

Because the Amazon is rich in natural resources like rubber and timber, as well as containing sought-after cattle-grazing land and materials for medicine, it's easy to see why the region's resources would exploited. This is also why the region's defenders are under attack.

In a 2016 session of Congress, when Bolsonaro was Federal Deputy for Rio De Janeiro, he said that, “In 2019, we’re going to rip up Raposa Serra do Sol [Indigenous Territory in Roraima, northern Brazil]. We’re going to give all the ranchers guns.” Bolsonaro also fired Ricardo Galvão, the former head of INPE, earlier in August, saying that Galvão "lied" about the increase in deforestation, CNN reports.

Indigenous tribes have long put their lives on the line to defend the rainforest from poachers, loggers, and miners. It’s a dangerous task. A 2019 Global Witness report showed that, globally, 164 environmental activists had been murdered, 20 in Brazil alone.

This attack on Indigenous people and their lands contributes to deforestation and environmental degradation, which leads to the wildfires sweeping the Amazon right now.

The Impact of These Wildfires

People have already been killed and displaced as a result of these harmful environmental policies, and the natural disasters. However, things are likely going to get a lot worse if Brazil and other countries — including the Europe, Canada, and the U.S. — don't stop the deforestation of the Amazon and get the fires under control.

The Amazon Rainforest — sometimes, along with all other forests around the world — are known as the "Lungs of the Earth" because they absorb harmful carbon emissions and produce oxygen. And rising levels of carbon are accelerating the climate crisis. CNN notes that the Amazon Rainforest produces 20% of the Earth's oxygen. These trees are also doing the hard work of absorbing destructive levels of carbon.

However, when those trees get cut or burned down, they release all that carbon back into the atmosphere. A 2014 NASA-led study showed that in a normal year, the Amazon rainforest — the world's largest rainforest — stored 2.2 billion tons of carbon in its trees. So, if that carbon were to get released on a large scale, it would be disastrous for every living thing on this planet. The Amazon Rainforest is also home to the worlds largest river system, and contains millions and millions of species.

Germán A. Quimbayo, a Colombian ecologist pursuing an environmental policy doctorate at the University of Eastern Finland, tells Bustle that the short-term implications of the burning of the Amazon Rainforest are not just limited to Brazil. Although CNN says that more than two-thirds of the rainforest is located in Brazil, "The Amazon is not only Brazil. Brazil shares the basin and rainforest with Colombia, Peru, Venezuela, Ecuador, Bolivia, Guyana, French Guyana, and Suriname. Also, the Amazon is connected with the Andes and the Orinoco basin. Triggered deforestation due to several (local-global) socio-economic drivers, violence and threat to communities and environmental activists, although with different levels at national-scales, are also all over these places," Quimbayo says.

How Can You Help?

This situation is incredibly dangerous. Not only does it have serious implications for people living in Brazil and the rest of South America, but it affects everyone on the planet. If you feel that you want to take action, there are a couple of things you can do. Environmental non-profit Greenpeace suggests that you donate to its efforts to protect the Indigenous guardians of the rainforest. You can also help Indigenous people in Brazil by donating to Survival International, an Indigenous rights NGO, and by being vocal about the dangers that they face.

The wildfires raging across the Amazon rainforest are really scary, and so is the threat that it poses to human life and health. And the oppression of the Indigenous people trying to protect "The Earth's Lungs" is enraging. But even though it may be tempting to give in to despair, don't. Climate grief is a normal reaction to news like this, you can turn that grief into power by taking action.