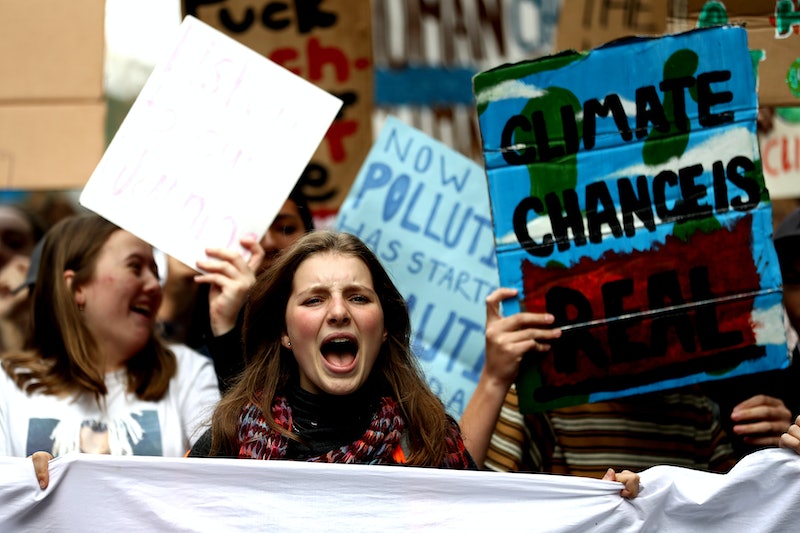 Sometimes, when I think of the climate crisis, my thoughts flood with fear. When I think of this devastatingly beautiful planet we live on, threatened by vast environmental destruction, my limbs fill with heavy sadness. These feelings are painful, but I’m not alone in them. Climate grief and anxiety — mental health issues that arise amid environmental change — will only worsen as temperatures continue to rise.

An Intergovernmental Panel on Climate Change (IPCC) report released on Aug. 8 said that the climate crisis and harmful agricultural practices threaten humanity’s ability to feed itself. A May 2019 report by the Intergovernmental Science-Policy Platform on Biodiversity and Ecosystem Services (IPBES), showed that one million of the planet's eight million species are at risk for with extinction as a result of human activity.

This constant loop of dire news — although there are bright spots, like the rise of young climate leaders, massive reforestation efforts in Ethiopia, and the increase of rail transportation in Europe — can lead people to feel despair for the future. For people already experiencing the impact of the climate crisis — like Greenland residents, who lost 197 billion tons of ice in July or people experiencing historic heat waves in India — the fear is much more immediate.

Anjali Enjeti, a political columnist for ZORA Magazine, says that her climate grief is informed by love for her children. “I find myself constantly thinking about the state of our planet, and I worry that my children's major decisions in adulthood — where they will live, whether they will have their own children — will be completely controlled by our rapid destruction of the earth,” Enjeti tells Bustle.

The American Psychological Association (APA) issued a report on the climate crisis’ effect on mental health in 2017. The report said that both people who are directly impacted by the climate destruction (like extreme weather) and those concerned about impending damage can experience ecological grief, which includes fear, anger, feelings of powerlessness, or exhaustion.

The APA also stressed that some people and communities would be more vulnerable to climate despair. This is backed up by scholarship linking the climate crisis to racism and capitalism. For example, researchers at the University of Michigan and the University of Montana found that hazardous waste sites and polluting industrial facilities were disproportionately located in nonwhite and low-income communities.

The report also highlighted the unique challenges that children and young people face. “Stress from climate impacts can cause children to experience changes in behavior, development, memory, executive function, decision-making, and scholastic achievement,” according to the APA.

Dr. Isabelle Letellier, PhD, a psychologist and lecturer in Child and Youth Studies at Stockholm University, says “Children are in a special situation because most are raised... in a climate-denying society that is betraying them by destroying their future. That means children will have a ‘realization’ moment where they will get think ‘People I trusted and loved have f*cked up my future.’”

Enjeti tells Bustle that “It's frightening to raise kids in a country that denies the existence of the biggest issue facing the human race,” and that elected officials can address climate grief by providing “forums for their constituents to be heard.” Enjeti says, “Members of the community want their leaders to know how climate change is affecting their lives, and making a space for this testimony is vital.”

We are not children, but we're experiencing many of the same emotions. However, children are more generally in touch with the urgency of climate change. For many adults, especially privileged ones, living through the climate crisis can feel more like being a frog boiling in a pot of water.

Letellier says that the uncertainty and lack of control can prevent people from being able to process the situation. "My mind is always going ‘Will we lose everything? Will the world still exist? Until when?’” Letellier says that mental health care professionals should begin reading about climate science and the impact of ecological crisis on mental health. “Professionals who are not climate-aware are very toxic right now for climate-anxious people, as they treat them as if they had an individual problem, when anxiety and grief are actually healthy responses to the situation,” Letellier says.

Part of climate anguish is also guilt. Personal actions — like flying less, recycling, or going vegan — can help reduce emissions. But for a variety of reasons, it’s hard for everyone to commit to these actions consistently, or even at all. That can lead to a lot of guilt. But as climate essayist Mary Annaïse Heglar wrote for Vox in May, climate change conversations have failed society in this regard, telling us that “climate change could have been fixed if we had all just ordered less takeout, used fewer plastic bags, turned off some more lights, planted a few trees, or driven an electric car. It says that if those adjustments can’t do the trick, what’s the point?,” Heglar wrote.

In light of an IPCC report that showed 100 companies are responsible for over 71% of emissions, for Heglar, it’s important that people not wallow in guilt over feelings of inadequacy. “We need to let go of the idea that it’s all of our individual faults, then take on the collective responsibility of holding the true culprits [fossil fuel companies] accountable," she wrote. "In other words, we need to become many Davids against one big, bad Goliath.”

It’s important to remember that the fight against the climate crisis is not hopeless, although anything resembling success will take a lot of effort from everyone. But it can be done, and has been done before — notably in the case of the ozone layer — as essayist Lacy Johnson pointed out on Twitter:

But addressing climate grief also means allowing yourself to feel the sadness, the fear… and to seek out communities and mental health professionals that will help you hold space for those emotions. Dr. Kritee (dharma name Kanko), PhD is a climate scientist, Rinzai Zen priest, and co-founder of Rocky Mountain Ecodharma Retreat Center, a nature retreat located in Boulder CO. Kritee, whose center runs workshops dedicated to climate grief and anxiety, tells Bustle that it’s important for people experiencing climate grief to take the time to mourn.

“Some people feel grieving is artificial for them or a waste of precious time,” Kritee says. “[But] grieving is often a natural outcome of finding oneself in a place of relative safety in the midst of neurological and somatic stress.”

Even though it’s important to mourn, it’s also important to realize the incredible power that you have to get involved. You can start by showing up the September 2019 Global Climate Strikes, writing to your elected officials, planting trees, and so much more. This fight isn’t over yet.