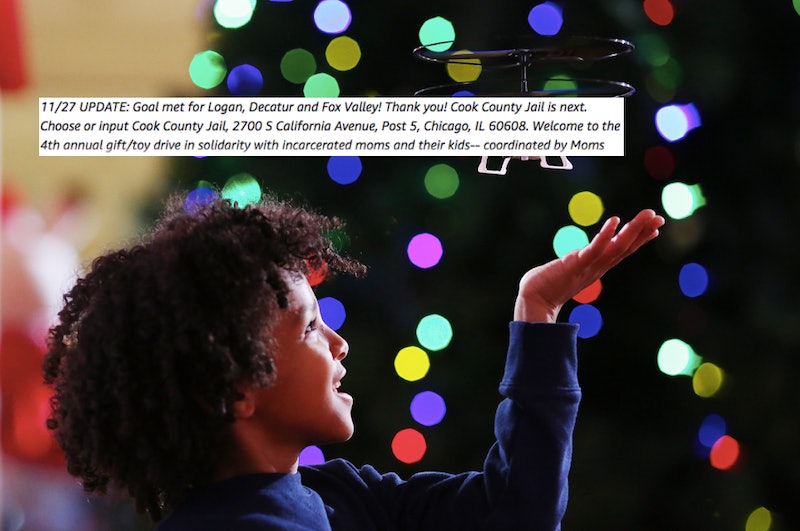 Parents showering their children with toys has long been a hallmark of the holiday season. For some kids whose parents don't have the resources to give them gifts, toy drives can help bring holiday cheer to children (and parents) in need. But other children will spend the holiday season away from their parents because their parents are incarcerated — and that's where this toy drive comes in. Groups out of Chicago are helping families through an Amazon wishlist filled with toys for children of incarcerated moms. The wishlist is part of the 4th Annual Holiday Toy Drive in Solidarity with Incarcerated Moms, and it's an easy and impactful way to make a difference in someone's life.

Moms United Against Violence and Incarceration in community with Chicago Legal Advocacy for Incarcerated Mothers (CLAIM), and Nehemiah Trinity Rising, Lifted Voices, Love and Protect, and Chicago League of Abolitionist Whites have been coordinating this toy drive for the past three years. Together, these groups have donated over 4,200 gifts so moms in prison and transition facilities can give holiday gifts directly to their children.

According to the toy drive organizers, the gifts donated through the toy drive are often the only ones the children will receive. This initiative gives incarcerated moms the chance to do something special for their kids, despite being behind bars.

The decision to focus exclusively on moms for this toy drive was intentional. “Moms [are] most often the primary caregiver of their kids prior to their incarceration. When a child’s father goes to jail or prison, the majority continue to live with their moms. When mom is incarcerated, the child is more likely to go to a grandparent, other relatives, or a friend. A child is statistically more likely to go into state 'care' when mom is incarcerated [versus] dad,” organizers stated in an information sheet.

The number of incarcerated women in the United States has increased by more than 700 percent since 1980. Of the women currently incarcerated in state prisons, 60 percent have children under the age of 18. Having a parent taken out of the home due to incarceration can be traumatic for children; children often face diminished mental health, behavioral problems, and poorer educational prospects.

To date, the toy drive has successfully raised donations for Decatur Prison, Fox Valley, Cook County Jail, Women’s Treatment Center, Haymarket, and more. Part of their success is due to their ability to organize exclusively online, via Amazon. Anyone in the world can contribute to this cause, and items on the toy drive’s wish list range from about $10 to $30. Organizers encourage folks to donate what they can, share with their friends and network, and to “think about what it feels like for a mother locked away from her child for months or years to be able to choose a present and surprise their child with it.”

If you’re interested in donating a gift for this toy drive, it’s super easy. Just go to the wish list on Amazon, and pick out a toy. Buy it the same way you would buy anything off Amazon, but instead of putting in your home address, send it to Cook County Jail, 2700 S California Avenue, Post 5, Chicago, IL 60608. There’s no need to choose the gift wrap option because jail officials will unwrap the gift for security purposes anyway. Moms will have the opportunity to wrap the gift themselves using donated wrapping paper.

This is a great idea that can be replicated all over the country. This Giving Tuesday, consider the people in society who are among the most marginalized — incarcerated women. Participating in this toy drive is a tangible way to give and make a family’s holiday season one to remember.