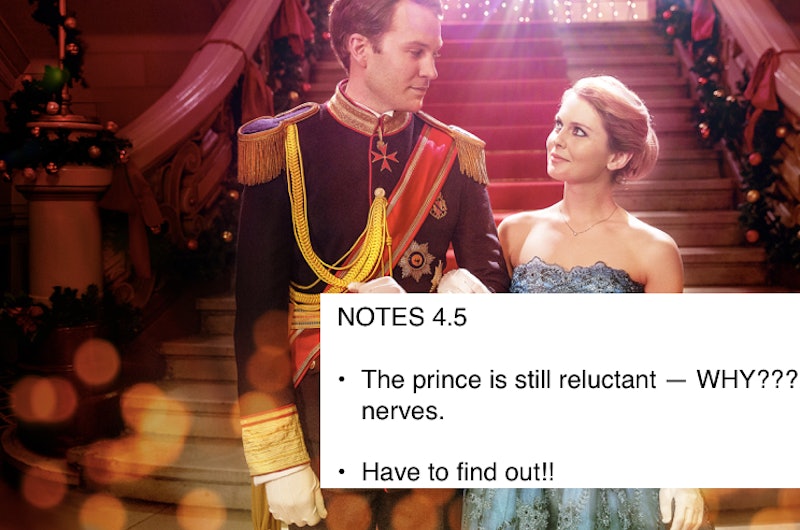 A Christmas Prince is a film about the luckiest journalist in the world. Sure, it's also about a prince and Christmas, but the story of Amber Moore is a modern fantasy for a journalist at any level. One day you're toiling over editing other people's articles and then suddenly you're embedded in a royal mansion tutoring a charming young princess and throwing snowballs with a prince that happens to have the most chiseled jawline on Earth. However, being a lucky journalist isn't the same as being a good one, and Amber's journalism notes in A Christmas Prince are just BONKERS.

Amber isn't shy about admitting that she's in over her head when she accidentally infiltrates the royal family of Aldovia. She's accidentally gone undercover and isn't even sure what scoop she's chasing by the time she's lied herself into getting a room at the mansion. There are only a few times that the audience gets to take a glance at Amber's writing skills — and despite the audience rooting for her, there's also no denying that her notes leave something to be desired. Twice in the film, the camera shows Amber's notes on her multi-day article that she is working on 24/7, and it seems that Amber's document, "Article Notes Richard Charlton.pages," is kind of all over the place.

To be fair, audiences only get a look at the pages "Notes 3" and "Notes 4.5" over the course of the film, hinting that she has at least five pages of notes. "Notes 3" includes such journalistic tidbits as, "How does the prince feel about her?" and, "Prince Richard and the queen clearly have different ideas about the prince's future." An editor may look at the latter sentence and ask, "BUT WHAT ARE THEIR IDEAS? HOW ARE THEY 'CLEARLY' EXPRESSING THEM? SOURCE THIS." In fact, it's a tad surprising that Amber doesn't ask such questions of herself as her actual job title is Junior Editor.

Imagine for a moment that you are Amber and you've come to the end of your stay with the royal family of Aldovia. It's time to write your tell-all report about what it's really like being a part of the Charlton family. You open your trust notes document and see the sentence, "What's their history???" It's simply not going to be a helpful reminder of the week.

An ongoing notes document would probably be a good place to describe the events of the day or try to write down as many details as possible so that you're not relying on memory to try and tell an accurate story. There's always the chance that Amber's jotting down questions to keep in mind and then filling out past pages with things she learns, or that she's setting goals for herself to answer these throughout her stay. However, that may be overly optimistic judging by the quality of her notes on the document listed as "Notes 4.5"

Later on in the document, these notes appear: "The prince is definitely starting to trust me... but I can't seem like I'm prying," and, "I think I'm finally getting to know the real prince... So not what I thought!" Amber needs to cool it on the ellipses for starters, but this also begs the question — how far apart is she taking these notes? Did she write that the prince was starting to trust her, got to know the prince, and then updated her document to remind herself that she's getting to know the prince? If you're taking notes every few hours, surely time can be spared to extrapolate some details.

In the end of the movie, Amber quits her job as a junior editor at a major publication to become a blogger, because Beat Now (Now Beat?) wouldn't publish her up-close-and-personal expose on living with the royals because it was too much of a puff piece. (I like to imagine that her actual writing sounds like her notes: "Fell in love with the prince... he's dreamy!!") Luckily, throwing away her benefits package won't be a problem as she ends the film getting engaged to the King of Aldovia.

A Christmas Prince is an easy movie to poke holes in. It's more interested in conjuring the feeling of Christmas magic than it is in offering a makeshift course on undercover journalism. That being said, future journalists of America hopefully know better that if you are going to sneak into a royal castle, lie about your identity, and fall in love with a foreign prince, you should make sure you're taking accurate, detailed notes on the matter for your eventual tell-all book... or, in Amber's case, blog.

More like this
'The Sandman’s Ending Is A Departure From Neil Gaiman’s Comic Book Series
By Kadin Burnett
What's New On Netflix: A Third '365 Days' Movie & Lili Reinhart’s New Film
By Arya Roshanian
What’s New On Netflix: 'Never Have I Ever' & 'Indian Matchmaking' Return
By Arya Roshanian
Netflix Reveals First Look At Wednesday In The 'Addams Family' Spinoff Series
By Bustle Editors
Get Even More From Bustle — Sign Up For The Newsletter