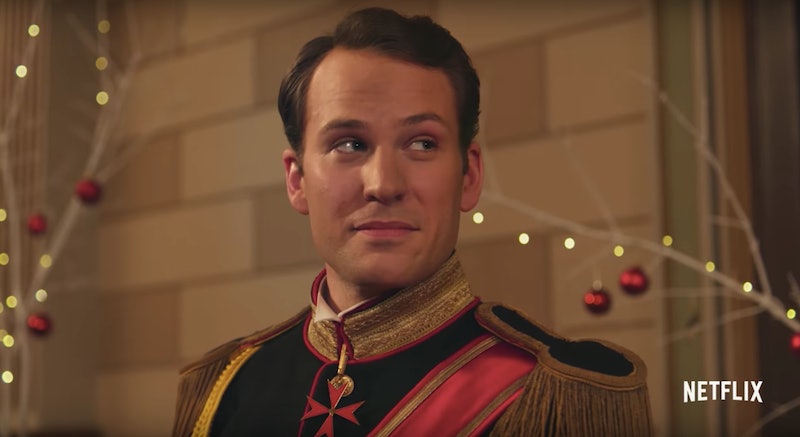 The network that's created the award-winning, semi-biographical series The Crown has just released a mashup of every soapy and clichéd prince, Hallmark, and Lifetime movie for the holidays. And guess what? The internet is flipping obsessed. A Christmas Prince has everyone talking and fans may be wondering: Is Prince Richard a real person? There's one detail among the film's many absurdities (plot holes, unrealistic story lines, and wolves) that sadly proves the fictional film's fantasy man may only exist in your dreams.

In the low-budget, "so bad it's good" Christmas movie, which was released Nov. 17, a clumsy American reporter (iZombie’s Rose McIver) is given a potentially career-altering assignment to cover a press conference in the fictional European country Aldovia. She's assigned to get dirt on the suave, handsome, playboy Prince Richard (Ben Lamb) who may become king.

*Spoilers and cheesy tropes ahead* She unexpectedly gets access to the palace and falls in love with the prince after being mistaken for the princess' tutor. Ultimately, Amber (McIver) is faced with the decision on coming clean and revealing her identity even though the prince winds up flying to New York on New Year's Eve to propose to her anyway. Anyone who's yet to watch can fill in the blanks.

Now although an American woman recently has had a fairytale love story with a foreign prince in real life, there are many signs that suggest Prince Richard and the whole film is very, very, loosely based on reality.

The film was released just a week before Prince Harry's engagement news was revealed, and that timing is rather coincidental. Although Prince Harry's fiancé Meghan Markle is an American (from LA), she's not a journalist and it's unlikely Netflix has a time machine to have predicted the news and make a movie about it.

If not Prince Harry, one could think Prince Richard is based off Prince William and his love story with Kate Middleton. Dramas like William & Kate: The Movie (2011) and William and Catherine: A Royal Romance (2011) have given a soapy take on the couple since they married in April 2011. However, Kate Middleton is not an American thus Prince Richard isn't based on Prince William.

Plus, there's one major factor that proves Prince Richard (who, reminder, is from a fake country) is completely fictional. PLOT TWIST: He's adopted. While the internet has wondered what adoption would mean for a royal family's legacy, it hasn't actually happened in real life.

The film's director or stars haven't taken part in any press to confirm the source of the story. However, A Christmas Prince's original screenplay writer Karen Schaler has had a lengthy career in travel journalism. On her site, she suggests her work is inspired by her travel expertise and adventures around the world. (And possibly a very romantic imagination.) Prince Richard may not be real, but his presence is driving fans wild.

Audiences have seen this story time and time again with films like The Prince and Me (2004), Cinderella (1950), and The Princess Diaries in 2001 (which offered a slightly different angle). Because there can't be enough, Lifetime just released another original TV movie My Christmas Prince. Still, there seems to be nothing quite like A Christmas Prince.

Netflix's description of the film is: "Royalty. Romance. And a really handsome prince. He's her most important assignment to date." It's cheesy, it's predictable, it's unrealistic, and it's everything fans could want around the holidays and more. While outlets like Entertainment Weekly question the insanity (here's its 13 ridiculous questions about A Christmas Prince), fans are already wondering if there will be a sequel. Basically, everyone's feelings are summed up by this tweet:

Although Prince Richard isn't real, the good news is journalists only need the following skill set to be placed on an international assignment and possibly fall for royalty: