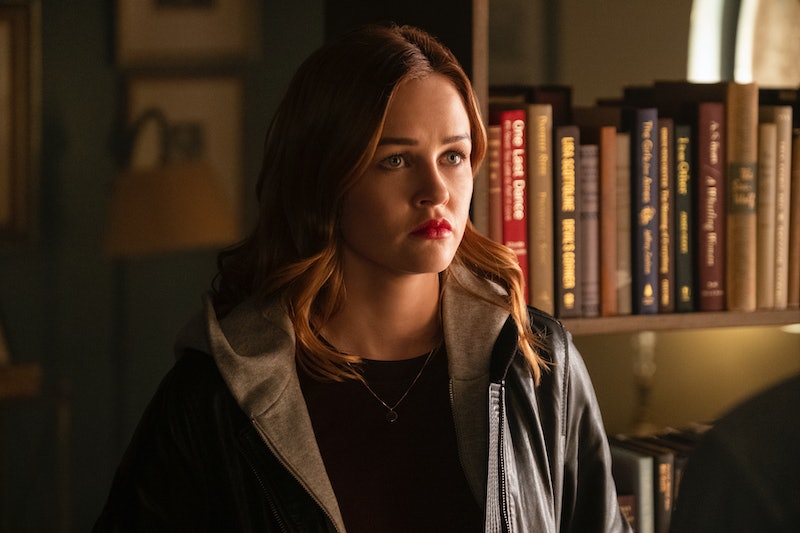 Most people, after being buried alive, escaping, and living to tell the tale, would hide from their predator and let karma do its job. But not Ambyr Childers YOU character Candace Stone, who tracks down her psychotic ex to get revenge and stop him from hurting more women. “I don't think I would go as far as wanting that kind of serious revenge,” Childers tells Bustle. “I’m the kind of person that believes, 'OK, karma's a bitch. I'll let the universe do its thing while I sit back and get myself on track and watch from afar'." Still, Candace's ultimate fate in YOU proves that sometimes karma misses the mark.

Candace was presumed dead at the hands of her ex-boyfriend, the now-infamous serial killer and stalker Joe Goldberg (Penn Badgley). But as viewers come to find out in the Season 1 finale, Candace is actually alive — and has some unfinished business to settle with Joe in Season 2. But while it may be uncharacteristic of Childers, she believes Candace is so hungry for blood precisely because she’s already been through one of the worst imaginative experiences possible.

“He already tried to kill her once and she survived, so I think once you face death, you're resilient,” Childers says. “She has nothing to lose. She almost died. She knows that she can survive. She knows how to play it carefully.”

During Season 2 of the Netflix phenomenon, Joe relocates to sunny Los Angeles (where he thinks nobody will find him due to his well-known hatred of the city) after Candace shows up at Mooney's bookstore in NYC. He gives himself a completely new identity, Will Bettelheim — by locking the real Will Bettelheim in a storage unit inside an identical replica of the plexiglass cage fans grew very familiar with in the first season. You can take Joe Goldberg out of New York, but you can’t take New York — and the psychopath — out of Joe Goldberg.

As viewers quickly learn, he has a new obsession on the West Coast: Love. No, not just the concept of love. Love Quinn, a co-owner of the organic grocery store hotspot that he gets employed at, is now the apple of his eye. And they end up falling in love according to Joe’s scarily precise plan. His only roadblock is, still, Candace, who's been keeping tabs on Joe from afar. After discovering that he’s hiding in Los Angeles, Candace starts dating Love's brother Forty after meeting him in Austin to get closer to Joe, determined to put a stop to his psychotic behavior.

Now that Joe is involved with another woman, it gives Candace even more motivation to take him down. “I think she knows what's going to happen,” she says. “She knows that he's going to keep on making these moves, right? And she wants to protect these other women. She's like the vigilante.”

Candace indeed knows exactly what Joe plans to do every step of the way. But what she doesn’t predict is her own sudden death — and it wasn’t Joe who was behind it. In a shocking twist, Candace’s demise comes courtesy of Love, who stabs her to death after she exposes Joe’s murderous actions and sadistic behavior to his new girlfriend. Rather than come to her senses, Love sympathizes with Joe and kills Candace to get her out of the way, revealing that she’s just as crazy and obsessive over him. “Now it's like a Bonnie and Clyde situation,” Childers remarked. Except even Bonnie and Clyde seem tame in comparison.

Childers believes that Candace truly had only the best intentions, calling her murder a “complete betrayal,” given that her motive all season was to take down Joe and protect Love. However, she understands why she had to die. “This show is about murder and stalking and it's not about happy endings,” she explains. “When I found out that my character was going to die, I was like, 'Oh, that makes sense'. I was expecting it and I didn't know how far out or how soon she would die.”

In fact, Childers is actually proud of how long her character lived before biting the dust. “Candace did good. She survived all the way until the ninth episode, so I have to give her props. She really fought the fight.” She remains proud of the work that she’s done on You, and still looks at Candace as an example of perseverance despite her eventual defeat. “We've all gone through things in life and I've gone through some serious sh*t in my life,” she recalls. “I would like to think to myself that I'm a survivor, so that's where I feel like I found a common ground between Candace and I. You can knock her down a thousand times but she's still going to get back up and fight.”

That statement might be true once again if Childers gets her way. She’s very open to Candace making a return, much like Beck did once this season, to haunt both Joe and Love from beyond the grave. “I'd love that opportunity to continue to torture Joe Goldberg,” she said, laughing. “It’s fun.” She, like most rational people, believes that Joe will never change, but if anyone can take him down, it would be someone he falls in love with. “He’s gonna make one wrong move because that's usually how it always happens,” she said. “He’s just going to make one silly mistake or get involved with one person that just defeats him.” Perhaps that could be Love herself. Joe better watch his back.