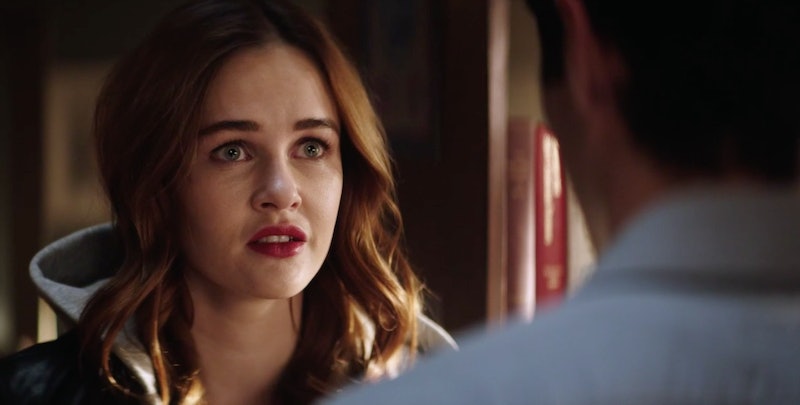 Spoilers ahead for Caroline Kepnes' You and the Lifetime series. While most of You's first season has focused on Joe's obsession with Beck, he's also still haunted by the ghost of his ex-girlfriend Candace. Joe can't help but remember her at the most inconvenient times, like when he's breaking into Peach's house or triggered by something Beck says that reminds him of the previous breakup. It's unclear whether Candace was also hurt by Joe or if she really disappeared like he keeps telling people, which makers her fate on the series so much more complicated than what actually happens to Candace in the You book. Unlike the show, the novel is pretty clear about her fate.

In the novel that inspired the Lifetime drama, Joe is pretty upfront about what he did to Candace. As he's in the midst of killing Peach — in the book, that takes place on the beach, not on her property — he recalls how he killed Candace. It turns out that Joe drowned Candace in Brighton Beach after she tried to break up with him. Joe says that he wishes she'd left him alone after the breakup, but she stayed with him for a few minutes after their talk. To Joe, her sticking around after telling him that she didn't want to keep dating was because she "wanted to see me at my worst," not because she was concerned for him. (As in the book's treatment of Beck, readers don't get to see Candace's side of the story.)

And as with the other people Joe's killed, the way he describes killing Candace suggests that he doesn't believe it's really his fault. From Joe's perspective, Kepnes writes,

In the book, Joe also makes an offhanded reference to a time he kept Candace's brother in the infamous cage. But readers don't learn much more about Candace's family, or the other people in her life. Whatever Joe did to Candace's brother, it doesn't sound like he killed him.

But in Lifetime's You, viewers see Candace primarily through her relationships with other people. There's her brother, who apparently suspected Joe had a hand in Candace's disappearance, but he's been dead for months after some time in a mental health facility. And then there's the record executive, Elijah, with whom Candace cheats on Joe. Joe kills the guy by pushing him off a ledge, where he's conveniently perched. (How did literally no one see this coming?)

Based on Joe's reaction in the show, it looks like Elijah is his first murder victim. He has no idea what to do, and decides to confide in Mr. Mooney about his actions. Mooney, though, is unfazed, telling Joe that some people just deserve to die. Technically, everyone dies eventually, so he's not exactly wrong. But it's not a great defense when it comes to murdering someone because you're insecure and jealous.

In the show, though, it looks like Candace is still alive, even if Joe killed the guy she was linked to (and possibly had a hand in the death of her brother, too). Joe shows Beck an Instagram account run by someone who definitely looks like Candace, explaining that she changed her name when she fled to Italy. Like Beck, Candace likely underwent gaslighting and psychological abuse while dating Joe, though not much of her relationship with Joe has been shown on screen.

Considering the fact that Candace may not be dead, if that really is her in the Instagram account Joe showed Beck, her and Joe's story may not be over. If she is alive, hopefully she won't meet the same fate Elijah did, or the fate she met in the book.

More like this
The 'Firefly Lane' Book Ending Teases Way More Tears To Come In 2023
By K.W. Colyard
'Bridgerton' S3 Teases Exciting Social Season For Penelope Featherington
By Bustle
Lib & Will’s Romance In 'The Wonder' Is Very Different From The Book
By Sam Ramsden
Everything To Know About The 'Daisy Jones & The Six' TV Series
By Maxine Harrison
Get Even More From Bustle — Sign Up For The Newsletter