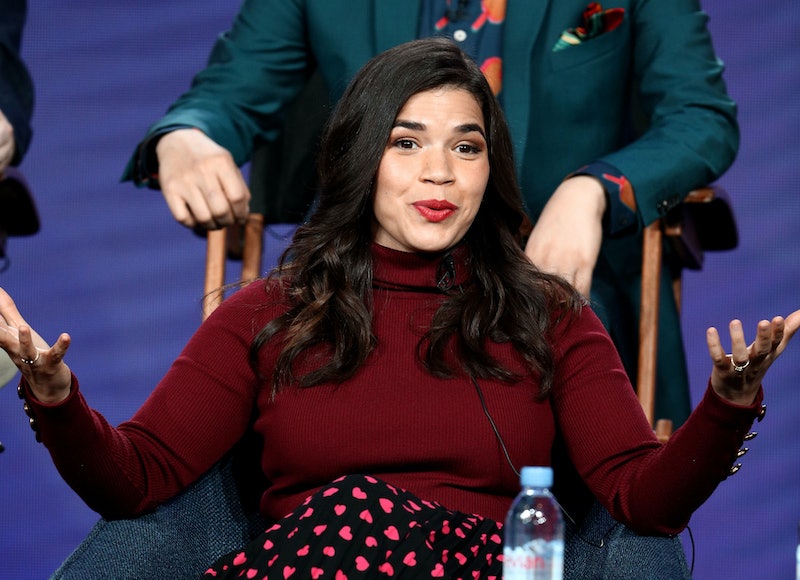 Her roles as Betty Suarez and assistant manager Amy couldn't be more different. That's exactly why America Ferrera wants to revisit Ugly Betty, and this time, have its leading character come into the Superstore universe. Although there aren't plans for an Ugly Betty revival as of now, Entertainment Weekly reported on Jan. 29 that Ferrera would love to have her two characters meet. Her idea not only proves how far she's come as an actor, but as a woman.

Ferrera confirmed there "haven’t been more conversations about [an Ugly Betty] reunion" at the 2019 Television Critics Association winter press tour, according to EW. However, she explained how special the character still is to her, saying, "I love Betty and it would be so interesting to go back and try and play her again from where I am now and who I am now.” Part of the fun of revisiting Betty, however, would see the "bright, sunny, lovely, radiating young woman" interact with Amy, Superstore's Cloud 9 assistant manager and unamused cynic.

"They’re completely opposite and very different... It’s been a wonderful experience going from Betty to Amy, and I would love to see those women interact," the actor said. "They do inside of me all the time.”

The contrast in Ferrera's lead characters from the two sitcoms reflects how she was up to the challenge in shifting gears, both personally and professionally. She explained:

“I came off of Ugly Betty and wasn’t on a show for five years, and I think part of what really drew me to the character of Amy was I had just spent four years playing [Betty]... who the world couldn’t knock down no matter how hard it tried. And that was fun and so exhausting and also felt like one way to experience a womanhood where you just wake up every day regardless of what’s happening and put on a smile and make people around you feel inspired and comfortable with who you are and who they want you to be.”

And five years after Ugly Betty (which ran from 2006 to 2010), she was introduced to Amy, a woman Ferrera feels is "on the exact opposite of that spectrum" from aspiring writer Betty. To Ferrera, Amy was a "woman who was done making people feel comfortable with who she was." The actor found it entirely refreshing to channel a working woman who didn't "feel the need to crack a smile or laugh at someone’s stupid joke, or make someone feel more comfortable with the dumb thing they said."

While NBC's Superstore is made up of a hilarious ensemble of actors, Ferrera's Amy is perhaps the most rooted in reality and often saying what the audience is thinking. Ferrera continued, "It was so appealing to me to get to explore what it’s like to work through the world as a woman without trying to make people like you." She even admitted that Amy has influenced her real-life mindset, and she's totally OK with it. “I feel like Amy’s definitely brought the cynic out of me for sure. It’s fun, I like it," she said.

While Amy is still doing her thing at Cloud 9, Betty could also very well have more ahead of her for audiences to see. In 2016, Ferrera revealed she'd love a Hulu revival of Ugly Betty at ATX TV Festival, as reported by EW. She encouraged fans to tweet #HuluBringBackUglyBetty and the show creator Silvio Horta said, "There are a lot more stories." But Ferrera has a solid point. Seeing these two women together would not only show off her talent, but perhaps teach audiences about their own behavior as well.

More like this
Vanessa Hudgens Proves She's Always A Wildcat At This 'High School Musical' Location
By Alyssa Lapid
The 'Hocus Pocus' Sequel Finally Has A Release Date & It Makes Total Sense
By Shannon Barbour and Radhika Menon
Everything To Know About 'My Big Fat Greek Wedding 3'
By Grace Wehniainen
“The Door Is Always Open” For Another 'Breaking Bad' Spin-Off, Says AMC Boss
By El Hunt
Get Even More From Bustle — Sign Up For The Newsletter