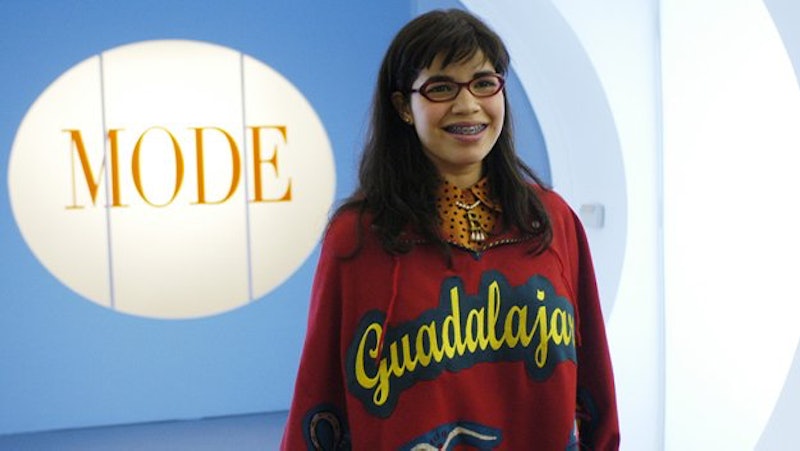 Before Jane the Virgin, ABC adapted a telenovela called Ugly Betty for American audiences. The series starred America Ferrera as a fresh out of college journalism student who ends up working for a fashion magazine called Mode. The series put a Latina family front in center in one of TV's most heartfelt shows ever. It was soapy, warm, silly, and excellent at tugging at our heartstrings. Ugly Betty ran for four seasons between 2006-2010. We are still nowhere near ready to let Betty go.

Ugly Betty was unlike any other show on television. Not only did the show center around a Latina family, its lead character was a bespectacled, braces-wearing, average-sized woman working in the world of high fashion. Betty was never ugly, she simply existed within an industry so obsessed with conventional beauty standards that they did not know how to take the bright, bundle of positivity that was Betty Suarez. Starting with her boss, Daniel Meade, a rich, playboy who was often dismissed as untalented, Betty slowly gave the employees of Mode a new perspective on life. They changed her as well in their own ways. Over the course of the series, Betty grew up, and watching it happen was such a joy. Even now, five years after Betty left the television landscape, she still owns our hearts, and here's why:

Betty Was An Inspiration

Betty worked hard to achieve success. She started out as an assistant and ended up heading to London to take an awesome magazine job in the series finale. Betty was seriously a force of nature. Letting obstacles get in the way of her dreams was not something she was ever OK with. Because Betty looked and acted like a normal person we could actually meet, she felt more like a friend than a TV character. Watching Betty support her family and friends, while also pursing her dreams of becoming a writer, made our own goals seem attainable somehow.

Vanessa Williams' Wilhelmina Was A Queen

Because no show can be sunshine and puppies all the time, Ugly Betty had Wilhelmina Slater. She was Mode's answer to Anna Wintour, and every word that came out of her mouth was golden. Wilhelmina's snark should have came with an awesomeness warning label. No one has ever quipped or schemed as flawlessly as Wilhelmina, and TV hasn't been nearly as funny since she left our screens.

Betty's Family Was The Actual Best

TV is seriously lacking in the family dramedy department these days. The Suarez family was funny and supportive. Hilda was a fierce big sister, Ignacio was a loving dad, and Justin was the coolest kid on TV. They were all so awesome even Daniel and Marc wanted to join the brood.

Marc and Amanda were not always the nicest people, but they did always have each other's backs. Their friendship gave the show an extra spark. They bonded over crafting exquisite insults and a mutual love of fashion. Together they could totally conquer the world, and when they let Betty into their inner circle, it felt a little like they were inviting us in too.

The Series Was Crazy Progressive

Not only did Ugly Betty have a multicultural cast, it also prominently featured gay and transgender characters throughout its run. Justin's coming out was one of the series' best storylines. He always knew he was gay, but it wasn't until high school that he began to talk about his gender identity. He found amazing support from Marc, in one of the very rare instances of an older gay character mentoring a younger one.

It Was So Romantic It Made Our Hearts Ache

It does not matter what your relationship of choice was, no one can deny Ugly Betty was great at romance. From the sweet first love of Betty and Henry to Marc's romance with Cliff, Ugly Betty was constantly making us swoon over one couple or another.

The Soapiness Was Delightful

Paternity mix ups, hostile takeovers of the magazine, people coming back from the dead— the telenovela part of Ugly Betty was over the top in the best way possible. As much heart as the show had, it was nice to balance it against such a fanciful backdrop of craziness.

Betty was the last person Daniel wanted as his assistant, but she ended up being the one person he most needed in his life. Their relationship evolved into a beautiful friendship, and maybe even something more by the end of the series. They grew up together, leaning on each other every step of the way— more so than any other relationship, their's formed the heart of the show.

Because This Is How it Ended

When the "Ugly" faded away on the title card, leaving Betty and Daniel to embark on a new adventure in London, it was clear Ugly Betty would never leave our hearts. And to this day, it hasn't.

More like this
The 'Ugly Betty' Cast Just Reunited In The Best Way
By Sam Ramsden
These 'Criminal Minds' Throwback Photos Show The Cast’s 17-Year Evolution
By Grace Wehniainen
The First Trailer For 'That '90s Show' Includes So Many Nods To The Original Series
By Jack Irvin, Alyssa Lapid and Grace Wehniainen
'Gilmore Girls’ Lauren Graham Just Revived Our Hopes For A New Reunion
By El Hunt
Get Even More From Bustle — Sign Up For The Newsletter