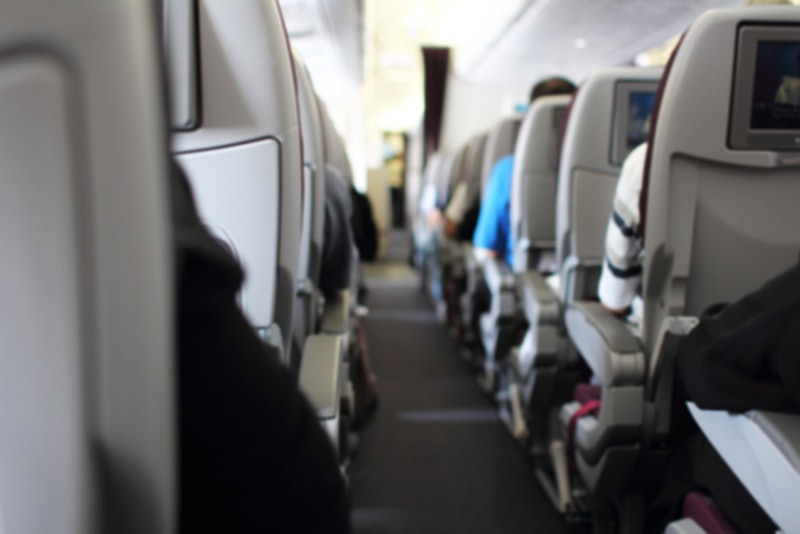 After flight attendants on an American Airlines flight noticed a woman and her baby both had a rare skin condition that presents as a rash, the two were asked to leave the flight, the Chicago Tribune reports. Jordan Flake and her son have a genetic skin condition called ichthyosis that causes dry, thick, and scaly skin but is not contagious, the Chicago Tribune reports. Flake shared a Facebook post about the experience on Feb. 28 in observance of Rare Disease Day, says the Chicago Tribune, a day meant to spotlight orphan diseases and disorders that affect a small percentage of the population.

American Airlines has apologized to Flake for the incident. A representative from American Airlines tells Bustle via email that “our goal at American Airlines is to create a welcoming environment for all of our customers. We sincerely apologize to Ms. Flake and her son for the experience they had Thursday, and our team has begun an investigation into the matter. Our Customer Relations team has already spoken to her directly and upgraded them on their American flights. We will also be refunding the cost of her trip as well.”

After Flake and her son Jackson boarded the flight, an airline employee asked the two other passengers in their row to get up, Flake wrote in a post for Love What Matters, a blog that amplifies uplifting stories. Flake claims the airline employee then asked her about her “rash” and if she had a letter from her doctor stating if she was clear to fly. Flake said in her post that she explained to the employee that she and her son have a genetic skin condition called ichthyosis.

Flake claimed that after speaking with her, the airline employee walked up to the front of the plane to talk to the crew. “He apparently also Googled it [ichthyosis] during that time. He came back and said he apologized, but we ‘wouldn’t be able to fly,’ and we ‘had to get off the plane,’” Flake said in her post. “He helped me get my bags and Jackson. He talked to the pilot as we were getting off. The pilot seemed OK with it, but the flight attendant rudely said (without even acknowledging me) ‘well she doesn’t have a letter from a doctor, so…’”

Flake alleges in her post that the airline was not able to retrieve her checked luggage, and she and her son had to stay at a hotel overnight. She said she also had to make unexpected childcare arrangements for her daughter, who was at home, and had to get a ride to the store to get lotions and clothes for her and her son.

“I have never been so humiliated in my life,” Flake said in her post. “I have emailed them [American Airlines] and am waiting for a reply. Happy Rare Disease Day! Quit being ignorant and take the time to listen to people! I shouldn’t have to explain myself.”

Ichthyosis causes extremely dry, thick, and scaly skin that can look like fish scales, according to the American Academy of Dermatology (AAD). The AAD emphasizes on its website that ichthyosis isn’t contagious. It’s inherited from one or both parents, says the AAD, and people usually develop it as kids, but adults can develop it in rare cases. According to the Foundation for Ichthyosis & Related Skin Types (FIRST), there are multiple varieties of ichthyosis, and about 300 babies are born each year with a moderate to severe form of ichthyosis.

In her post, Flake calls for people to stop discriminating, to ask questions, and to listen to others. “I should never feel ashamed of myself for the way I was born. This was unacceptable and uncalled for,” Flake said. “In 2019, it’s time we stop discriminating. Ask questions and listen.”