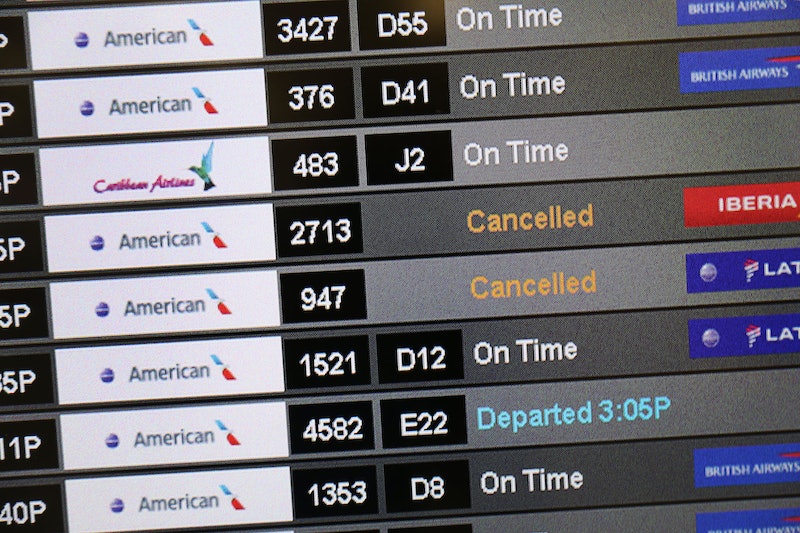 If you're taking a flight on American Airlines, you might want to check and make sure that you weren't scheduled to fly on a Boeing 737 Max 8 — even well into April. In response to the Federal Aviation Administration's decision to ground that type of jet following the Ethiopian Airlines crash, American Airlines has canceled 90 flights per day until at least April 24.

The goal, according to a statement released by the airline, was "to provide more certainty and avoid last minute flight disruptions" that would be necessary if the company waits to cancel. "By proactively canceling these flights, we are able to provide better service to our customers with availability and rebooking options," the statement said.

The airline has 24 Max 8 jets in its fleet. All of them are out of service until the FAA deems the planes safe to fly; Boeing is working on a software update that could prevent errors in the automated anti-stall system that is suspected to have played a role in the crash.

If you have a reservation with the airline that is affected, it will be contacting you. "American’s reservations team will contact affected customers directly by email or telephone," the statement continued. "We know these cancellations and changes may affect some of our customers, and we are working to limit the impact to the smallest number of customers."

If you don't want to wait for American to contact you, you can log into aa.com and find your booking details — or check the mobile app. According to American, if your flight is listed as on time, you don't need to worry.

Even if you know your flight was to be flown on a different aircraft, you might want to check. Some have been switched around to maximize the fleet. "Our goal is to minimize the impact to the smallest number of customers," the airline's statement reads.

The key thing to check is if it's canceled or on time. It may even show online that your flight is being operated on a 737 Max 8, but if it's showing as on time, that means the airline has rerouted another aircraft to cover the flight and the computer system just hasn't been updated yet.

Southwest is adding about 130 daily cancellations to the schedule bit by bit — currently every five days. United also flies the plane but hasn't had to cancel flights.

Meanwhile, Boeing is working hard to finish the software update and has had pilots and technicians visit its facility to try out the new version in a flight simulator, CNN reported. All pilots successfully landed the planes when the simulator recreated conditions similar to those seen in the recent crashes.

"We had a productive session this past Saturday and plan to reach all current and many future MAX operators and their home regulators. At the same time, we continue to work closely with our customers and regulators on software and training updates for the 737 MAX," Boeing told CNN.

For American customers affected, other flight options will be made available. Ultimately, if you don't find a rebooking option that works, you can always decide to stay at home. The airline will provide full refunds.