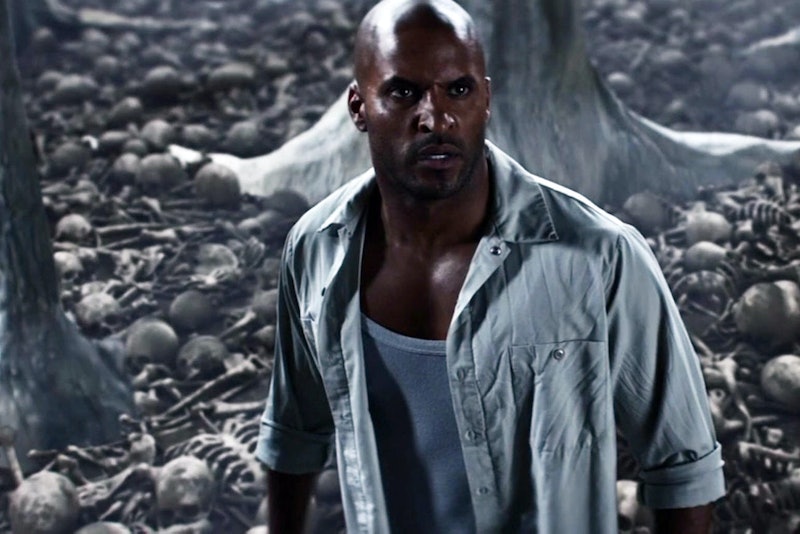 Neil Gaiman's award-winning novel American Gods may have debuted 16 years ago, but the timing has never been more right for its TV series adaptation. Enter Bryan Fuller, Michael Green, and Starz, and the end result is one of this season's best new shows. Beautifully shot and edited, American Gods (which premiered Sunday, April 30 on Starz) is like moving art, so visually striking in each scene that you don't even realize the brutality of what you're actually seeing until the scene has ended. No exaggeration: this might be one of the most brutal and graphic TV shows yet.

And don't even get me started on the acting. Fuller and Green assembled a veritable who's-who of iconic legends to round out the perfectly cast roles. Book fanatics and American Gods newbies alike will be in awe at the cinematic quality of this new series.

For those uninitiated in Gaiman's fictional world, American Gods is about a lot of different things depending on who you ask or which character you favor. On a large scale, the Starz series is about a war brewing between the old gods and the new. On a smaller scale, it's a road trip story between Mr. Wednesday (Ian McShane) and ex-con Shadow Moon (The 100's Ricky Whittle in a star-making turn). But if you ask Gaiman himself, the whole story is actually about immigration.

All throughout his novel, there are "Coming to America" standalone chapters devoted to stories of how the old gods – you guessed it – came to America. And according to Fuller and Green, those standalone chapters and one-off characters have been expanded for the TV series, making the spotlight on immigration even brighter.

On the American Gods series premiere red carpet in front of the Arclight Hollywood Cinerama Dome, Fuller tells Bustle that for that reason, this series could not be more timely.

"The current relevancy is the country shat the bed," Fuller says as the neon lights shine brightly around him, raising his voice to be heard above the fans screaming his name to our left. "We have been vilifying immigrants a little too desperately recently. For us, it's a nice salve to tell compassionate, celebratory stories about immigration."

But Fuller actually isn't happy about how accidentally relevant his new series is. "We would rather be telling a quieter show in a progressive administration than a loud show in an insane one," he says with a grim look on his face, and I can only nod in response as we pause to let what he just said sink in.

His sentiments were later echoed by many of the stars walking the carpet. Jonathan Tucker, who plays Shadow Moon's prison buddy Low-Key Lyesmith, is glad to be able to tell a story with such a meaningful message about how immigration is the backbone of America. He only wishes that the stories didn't need to be told so desperately as a result of what's going on in our country right now.

"The secret sauce of this country, and why we are going to come out of this past election stronger than ever, why I really a tremendous faith in America and Americans, is that we are interwoven with our diversity and our legacies and our past," Tucker says. "What we brought from other countries and other cultures, family legacies and everything that's come to these shores of America has become a part of our culture and ingrained themselves. It makes us so strong. While certain traditions might fade from the zeitgeist or popular culture, they're still a part of who we are."

He pauses for a moment, and then continues, "And we continue to bring new ideas and thoughts and perspectives to our country and it creates this beautiful fabric that is wholly unique in the world. Our story holds up a mirror to that and adds a spice to it. It allows you to know it's there in a very visceral, visual and spiritual way. That's why it's exciting to be a part of the show."

Pablo Schreiber, who joined the series later in the production process in a recasting move for 7-foot-tall leprechaun Mad Sweeney, claims he would have joined the series regardless of what was happening in the real world. The timeliness and relevance of it today was just a bonus.

"It doesn't seem like it parallels anything that's happening in the world, does it?" he jokes with a smile, before getting serious. "One of the great gifts that we got on this show is that it's coming out at a time where there's been an election recently and now all of a sudden immigration has become a touch point or conversation point. The book itself is about the melting pot that is America and how it was created. A huge part of the novel has all these Coming to America segments where all the old gods basically tell how they came to this country. At its bottom, this is a story about cultures that have created this country."

He hopes that by watching American Gods, viewers are able to open their minds and hearts more to other people's stories. If people are just entertained by the show, that's great. But if people learn how to empathize with each other? Even better.

"Essentially the idea of immigration is important here because we're, as a show, asking everyone to acknowledge the amount of voices that were used in creating this amazing country that we have," Schreiber says. "Hopefully that's a beginning of a longer conversation."

"I find that often in hearing somebody's story, you gain a new understanding and a new insight as to what struggle is like from someone else's perspective," Jones says. "Any time you can do that, that person somehow becomes a bit more human, a bit more real. And hopefully, that creates a lot more empathy in how you deal with them. I think any type of story that talks about how we are all together and less about how we are all apart, is good for humankind. I tip my hat to the maestros of Neil Gaiman and Bryan Fuller and Michael Green and count myself lucky to be a part of American Gods."

So should we start the petition now to make American Gods required viewing for everyone in America, or does that come at the end of this season?