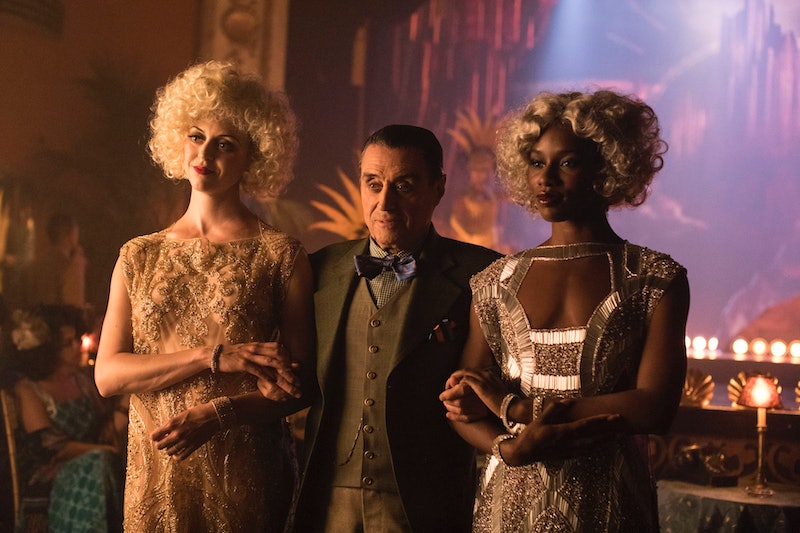 Season 2 of American Gods has often explored how ideas, faith, and the Gods that embody the beliefs of humans can transform over time. While some Gods have died out, others have reinvented themselves in a new image and some characters who thought they were fully human have realized they're half-God. The revelation in the American Gods finale that Shadow is Mr. Wednesday's son could have an impact on Shadow, at least according to American Gods star Yetide Badaki.

The revelation comes in the form of a montage of moments from Shadow's past, including memories of his mother and off-handed comments that Mr. Wednesday made about Shadow's mother, which are brought about by a conversation with Bilquis in which she encourages Shadow to remember who he is. Badaki, who plays Bilquis on the series, tells Bustle that, "Their discussion, I believe, helps to lift that veil which I think is a powerful moment for the audience as well because, as the audience, we are experiencing this world through Shadow's eyes."

While the reality of the world in American Gods is constantly shifting at the whims of those in power, there's no changing the truth.

The revelation that Shadow is Mr. Wednesday's son adds some personal stakes to the war, which seems to be crucial for Shadow since he doesn't seem to be as interested in fighting for Laura as he once was. After the disillusionment, frustration, and confusion he found at the House on the Rock and Cairo, IL, Shadow Moon is seen traveling on a bus, sans Mr. Wednesday, to a new place. "We know we're going to Lakeside. Shadow is on this journey there," Baldaki tells to Bustle, " [American Gods Author and Executive Producer] Neil Gaiman has very graciously shared that fact."

Lakeside is a crucial location in the American Gods book, where Shadow spends a great deal of time and runs into a variety of characters he has encountered in his past as the looming war grows ever closer.

While we know that Shadow is going to be involved in the war that all of American Gods is heading towards, his interaction with Bilquis indicates that Shadow is willing to humor the idea that there's an option outside of winning or losing. "What I love is that in this world, we're being told by very powerful forces that it must go one way or another, you have Bilquis offering up the option of a third way and that can be very exciting," Badaki adds.

As Bilquis has redefined her role as a preacher, adapting her own beliefs and principles to others, has only earned her more worshippers and admiration — even though she thought she had lost it all. This suggests that the Old Gods may not need to die; they simply need to reinvent themselves. Audiences may not know all of what Season 3 has in store for him, but fans can expect to see Shadow either embracing, rejecting, or redefining his Godly origins during his time in Lakeside. That time can't come soon enough.