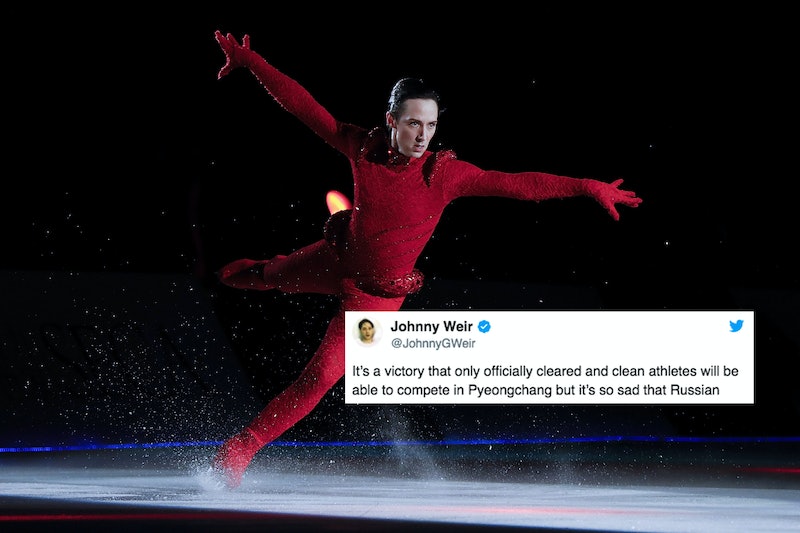 In a ruling that stunned many, the International Olympic Committee officially banned Russia from competing in the upcoming 2018 Winter Olympics in Pyeongchang, South Korea. After the committee said Russia has an "unprecedented" doping problem, American Olympians reacted to the Russian ban with varying sentiments that definitely didn't always agree with each other.

Former president of Switzerland and chair of the Inquiry Commission, Samuel Schmid, led a 17-month-long investigation and recommended several steps for the ban. The IOC has been asked "to take the appropriate measures" to punish the country for "the existence of a systemic manipulation of the anti-doping rules and system in Russia."

After approving Schmid's report, the IOC suspended the Russian Olympic Committee and declared that it would invite clean Russian athletes to participate in neutral uniforms under the Olympic flag. Only those who have not been found guilty of the IOC's "Anti-Doping Rule Violation" will be allowed to participate. Additionally, the Russian anthem, per IOC, will not be sounded and its flag will not be flown at the 2018 Winter Olympics.

According to Russian news media, Russian leader Vladimir Putin is set to deliver a statement on the IOC ruling. But the announcement, which caused waves on Twitter, elicited reactions from former American Olympians who shared their two cents on Tuesday.

For former American Olympian, Charlie White, the decision was a "sad and complicated" one. "I feel sick for the clean [and] affected athletes and fully sympathize with whatever emotions they may feel," White tweeted.

Ice hockey Olympian, Angela Ruggiero, wrote that it was an "important day for [the] IOC and IOC Athletes' Commission protecting clean athletes."

Two-time U.S. Olympic speed skater Nick Pearson shared detailed thoughts on the IOC decision and called it a "political symbol" while questioning whether the decision was effective in rooting out athletes who may have used performance-enhancing substance.

This decision by the @IOCMedia is just a political symbol, but really does nothing to punish the actual cheaters. There are still a large number of dirty athletes competing, this just opens the door for them to continue through the @Olympics.

Former American bobsledder Olympian Steve Mesler shared three points on his Twitter on Tuesday. The IOC decision was "justice for a horrendous act on sport, a great option for clean athletes to have the opportunity to compete, and [a] partial vindication for so many who we're [sic] hurt by Russia's actions," Mesler tweeted.

Former figure skating Olympian, Johnny Weir, shared mixed feelings on Twitter when he tweeted that the IOC decision was "a victory that only officially cleared and clean athletes will be able to compete" in Pyeongchang, South Korea, but he added that it was "so sad that Russian athletes won't be able to compete under the flag of the country that raised them."

Former speed skating Olympian, Ryan Bedford, gave the IOC a positive review and said that it was good news for clean athletes. "I commend the @IOCMedia for their work [in] investigating Russia. It is a great day for the athletes of the world to compete clean."

So far, current American Olympians for the upcoming 2018 Winter Olympics have not shared their own personal views on the IOC's decision. After looking at the reactions from White, Bedford, Ruggiero, Pearson, Mesler, and Weir, it seems only natural that athletes will indeed have a mix of positive, negative, and confused reactions to such a strong announcement that bans an entire country.