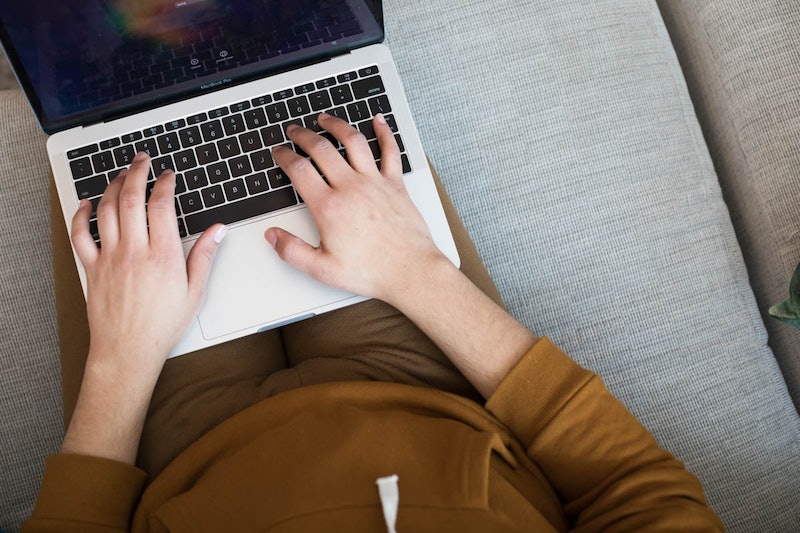 Ever come home from a night out and spend the next hour putting things in your Amazon cart? Drunk shopping, as it's known, is pretty freakin' common, and a new survey conducted by the Archstone Recovery Center for addiction rehabilitation reports that Americans' drunk shopping habits are more expensive than you think. Per the survey of around 1,000 people who'd reported buying something off Amazon after a night out, Americans spend around $30 billion shopping online while buzzed.

According to NBC News, the average American buys nearly $500 worth of extra stuff per year when tipsy — $447.57 to be exact, according to a separate study conducted by Finder — and while the amount spent was shown to vary depending on the type of alcohol a person drinks, all the drinkers surveyed were more prone to impulse buys while shopping under the influence. Finder further noted while shoppers spent $206 while under the influence last year, that number has now more than doubled to nearly $500. Finder also reports that nearly half of American adults who drink alcohol say that they regularly shop while under the influence.

The survey from Archstone Recovery Center found that different types of alcohol influenced how much a consumer spent shopping online; whiskey drinkers spent the least, while gin drinkers spent the most, according to Consumer Affairs.

Krauss Whitbourne, a professor emerita of psychology at the University of Massachusetts Amherst, told NBC that, “In general, alcohol is a disinhibitor and usually people are feeling kind of expansive and good,” which can influence people to spend money impulsively. Whitbourne goes on to say that while alcohol is a depressant, the initial feelings of euphoria can lower inhibitions, leading to more impulsive behaviors — such as, for example, a spree of one-click impulse buys.

In our current era of one-click shopping with stored credit card information on all of our favorite shopping sites, one way to help guard against booze-induced impulse buys is to disable one-click purchase confirmation before you head out for the night — especially if you know you might be prone to overspending. Per Archstone’s recommendations, it can also help to delete all-too-accessible shopping apps on your phone before you head out for cocktails, and keep your laptop out of reach when tipsy. Maybe queue up a favorite TV show on Netflix, or see how much you can water your plant in Plant Nanny (by which I mean, drink some water). You can also install a temporary app to help you steer clear of drunk spending.

Doing some light online shopping when you're a little bit buzzed isn't necessarily the end of the world, but if you constantly wake up to shipping confirmations for things you don't remember ordering, or you find yourself spending more than your budget allows, it might be worth seeking out a counselor to discuss potential ways to manage your drinking. But with a little awareness, preparation, and forethought, you can enjoy a night out with your friends without a financial hangover the next day.