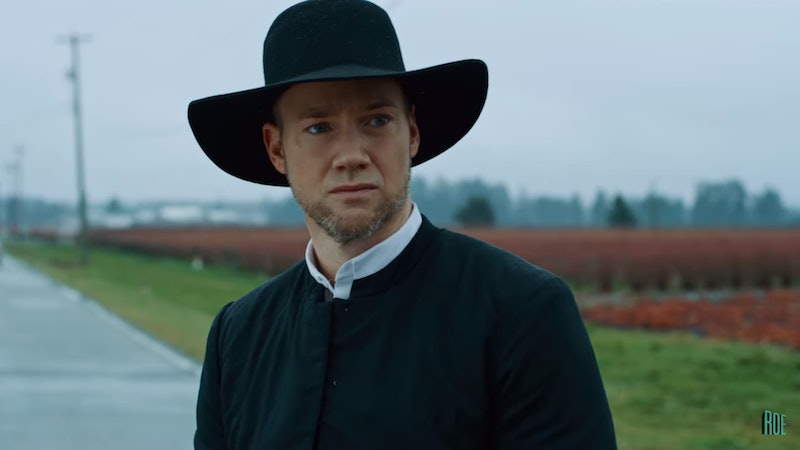 Though the new Lifetime movie Amish Abduction isn't based on a true story, it's definitely a scary one. Annie (Sara Canning) and Jacob (Steve Byers) are a seemingly happy Amish couple until Jacob decides he wants to leave the community in order to live among "The English," aka the non-Amish. Adding insult to injury, he then returns to the community to take custody of he and Annie's son Caleb (Liam Hughes) by any means necessary — even potentially murder, as the trailer seems to suggest.

Leaving the Amish community isn't unheard of, but while it does often result in shunning and total excommunication, it generally does not involve murder. In Amish Abduction, Jacob isn't content with simply leaving his community — he wants to take his child with him. And while Annie won't want to be separated from her son, the Amish community likely won't let Caleb be taken from them so easily either. It's clear that Jacob won't take no for an answer, and people may lose their lives if they stand in his way.

This isn't the first time Lifetime has dramatized the goings-on within the Amish community. In fact, they've made several other movies focusing on that exact subject dating all the way back to 2004. If Amish Abduction seems like your cup of tea, you'll want to add these to your Lifetime marathon.

Plain Truth stars Mariska Hargitay — best known as Olivia Benson on Law & Order: SVU — as a defense lawyer working on behalf of an Amish teen named Katie (Alison Pill) who's accused of murdering her baby. It's not an open-and-shut case, and as the truth is revealed, it becomes clear that evil sometimes lurks in the least obvious of places. Lifetime based this movie on Jodi Picoult's book of the same name and it stays pretty true to the novel.

Based on the book Amish Grace: How Forgiveness Transcended Tragedy, Lifetime's Amish Grace follows the true story of a group of Amish parents and their community who immediately offer forgiveness to a man who kidnapped and murdered a group of Amish schoolgirls in the community of Nickel Mines, Pennsylvania. The suspect, Charles Carl Roberts IV, shot 10 girls in their schoolhouse in October 2006. Five of them died; the other five survived. The film, which was dedicated to the victims, follows the tragic events and their aftermath.

An Amish Murder stars Neve Campbell as Kate Burkholder, a young Amish woman who survives a spate of murders that fracture her Painter's Mill, Ohio Amish community, then leaves because of the trauma she experienced. Roughly 15 years later, she returns as the town's Chief of Police and finds old wounds reopened when she begins investigating an all too similar series of murders.

At 18, Hannah Yoder (AJ Michalka) believes she's ready to leave the modernized world behind, marry her boyfriend Samuel (Jean-Luc Bilodeau), and fully commit to the Amish community. That is, until she takes a trip to Hollywood as part of the Amish tradition of Rumspringa, in which young adults get to experience life outside of the community before deciding whether or not to be baptized into the Amish church. While partaking in the rebellious rite, things start to get a little complicated in Hannah's world, and she's left with a nearly impossible choice to make.