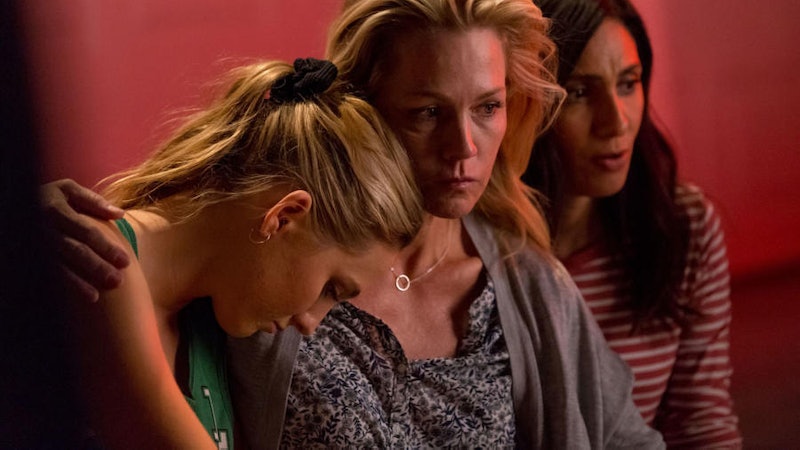 Lifetime's latest original movie, Your Family or Your Life, follows Dr. Kathy Meyer, whose successful attorney husband David is found dead of an apparent suicide. It's an "open and shut case" for the police, but Kathy suspects foul play — especially once she discovers David had uncovered incriminating information about a billionaire banker and was on the cusp of exposing him. With a plot so obviously set up for maximum twists, it's unlikely Your Family or Your Life is based on a true story, but there is one small detail that grounds it in reality: Jennie Garth (Beverly Hills, 90210) stars as Kathy, and her real-life daughter Luca Bella plays Kathy's daughter April.

According to IMDb, Your Family or Your Life marks Bella's third-ever acting role: she previously appeared as the titular character in a 2017 short called Luna, and as Alexis in the YouTube series Interracial. As noted by Entertainment Weekly, her acting career mirrors a storyline from Beverly Hills, 90210, in which Garth's character helped her fictional daughter Kyler (Karis Cameron) break into the industry. Garth previously teased to the outlet that many of the plot points in the BH90210 reboot were borrowed from real life, so perhaps Kyler was meant as a stand-in for Bella.

In Your Family or Your Life, Bella's character helps her mother investigate her father's death alongside her best friend Michelle (Alexandra LeMosle). The deeper they get into it, the more dangerous it becomes, and Kathy must work to both catch her husband's killer and keep April out of harm's way.

There's no trailer for the movie, so unlike many Lifetime films — which tend to spoil half the story before they even premiere — it's difficult to predict how things will play out. But for viewers, that's a good thing: it gives Your Family or Your Life a chance to become a real mystery with a huge payoff when what really happened to David is finally revealed.

The easiest answer would be that the billionaire killed David, but that almost feels too obvious, even for a Lifetime movie. It seems more likely that the real suspect is someone who was close to the banker whose interests would also be in jeopardy if David made the information he learned public. It's also possible that the murderer is someone that Kathy and April already know — as they say, keep your enemies close —or that David's death is totally unrelated to the banker. Whoever it is, and whether or not they come for Kathy and her daughter before they figure it out, it has the potential to create a thrilling and unexpected twist.

More like this
At 28, Rosie Perez Risked Her Career To Stop Playing Stereotypes
By Gabrielle Bondi
Here’s Everything Coming To & Leaving Netflix In February
By Jake Viswanath
The Plane Crash In 'Dear Edward' Is Based On A 2010 Tragedy
By Grace Wehniainen
'Boiling Point's TV Sequel Is Set To Deliver A “Rollercoaster Of Emotions”
By Catharina Cheung and Sophie McEvoy
Get Even More From Bustle — Sign Up For The Newsletter
From hair trends to relationship advice, our daily newsletter has everything you need to sound like a person who’s on TikTok, even if you aren’t.