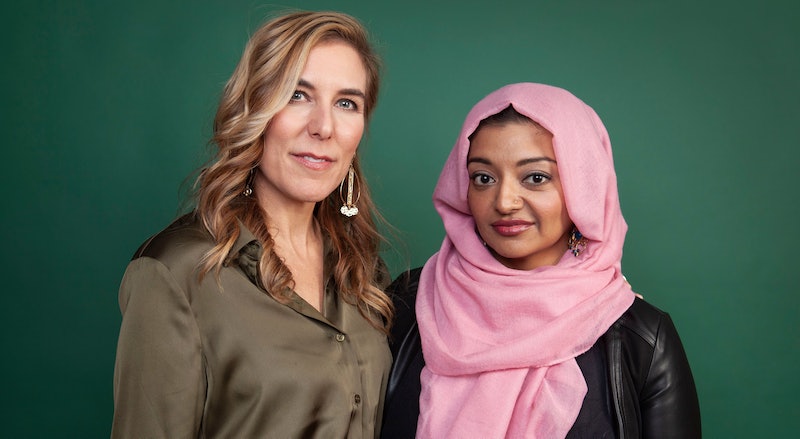 During the last episode of This American Life’s true-crime podcast Serial, Adnan Syed — the man whose 19-year-old murder conviction acted as the centrepiece of the story — asked reporter and host of the show Sarah Koenig: “Do you have an ending?” Yes, Koenig told listeners, of course she had an ending. And, for some, that ending was enough: Koenig had pulled at the threads of Syed’s case, and now we had to come to our own conclusions about what happened. But for filmmaker Amy Berg, there was so much more to unravel.

“Emotionally, I connected with that story,” Berg says of Serial, which first aired 2014 and went on to be downloaded more than 175 million times by people around the world. However, as a self-confessed “armchair sleuth,” the documentarian found herself obsessively picking at parts of the narrative long after the podcast had wrapped. The Case Against Adnan Syed is the result of that picking. Berg’s new four-part HBO series not only documents the continuation of Syed’s legal journey, but offers viewers the chance to hone in on new parts of the case’s complex tapestry.

For those who are unfamiliar with Syed’s case, the basic facts are as follows: in February 1999, Syed was arrested for the alleged murder of his ex girlfriend, Hae Min Lee, a highschool student who was believed to have been killed a few weeks earlier, on Jan. 13. A year after his arrest, a jury found Syed guilty of the murder, and he was sentenced to life in prison, as the Baltimore Sun reports.

As Koenig explained on Serial, the prosecution’s case against Syed relied heavily on the testimony of Jay Wilds, an acquaintance of Syed’s from the same high school who told police that Syed had allegedly admitted to murdering Lee, and had asked for Wilds’ help in burying the body.

Wilds’ testimony, and the initial handling of it by Baltimore police, was one thread Berg was determined to pull further. “It was clear they were looking through the eyes of one person,” Berg says. “So the tunnel vision aspect of this seemed obvious to me.”

When speaking to me about Wilds' testimony, Chaudry echoes the statements she made in the documentary: “It’s [the police’s] testimony. They created it," she alleges. I have reached out to the Baltimore Police Department for response to these comments, but have not yet heard from them. It should be noted that no solid evidence has been presented to back up Chaudry's claims.

With the exception of Darryl Massey, a former detective on Syed’s case, Berg and her team reached out but were unable to engage anyone from Baltimore police for the documentary. “But Baltimore is known for that,” Berg says, speaking about the reluctance of police officials to discuss cases their department has handled. “We called, probably, 60 different people that worked in the police department through that period, and they all said the same thing,” Berg explains. “[These were] people that hadn’t worked in the department for ten years. One guy was a photographer. He hadn’t been there since, like, 2002 or something, and he was an artist that would ride around on his motorcycle and take photos and stuff. And he still wouldn’t talk.” I have got in contact with the Baltimore Police Department to ask for a response to these comments, but have not yet heard anything.

“It’s a band of brothers,” Chaudry adds. She tells me that members of the police in Baltimore “circle the wagons,” sticking to a “code of silence” when it comes to instances like this. Berg describes the police’s attitude in a similar way, saying there is a “bro mentality,” and alleging that the reality isn't too far from the 2012 fictional crime drama The Place Beyond The Pines. I have reached out to the Baltimore Police Department for response to these comments, but have not yet heard from them.

Another avenue pursued in Berg’s documentary is the role race and culture played in this conviction of Syed, who is Muslim. During our interview, Berg tells me that she believes “Islamophobia” is involved in this case, and that it's “really important to understand.” And Chaudry agrees, saying Islamophobia is a “seminal” part of the story.

Speaking about Syed’s bail hearing, which is featured in episode three of The Case Against Adnan Syed, Chaudry says: "Dozens and dozens of community members, upstanding community members ... came forward and said ‘We’ll put our houses up for bail.’" However, as Chaudry explains, "instead of it being an asset to Adnan that there are so many people who know him, and have seen him grow up, and will ensure that he appears for court," it worked against him. Chaudry points to the speech made by the prosecutor at the bail hearing, which can be heard in the documentary. In it, the prosecutor says: "The fact that the defendant has strong support from the community, that is what makes him unique in this case. He has the resources of this entire community here, and our investigation reveals that the defendant has an uncle in Pakistan and he is indicated that he can make people disappear."

"I remember people were like, ‘What just happened?’ They couldn’t believe that this was the state’s [argument]," Chaudry says.

Chaudry goes on to say that, during Syed’s trial, “his religion, his ethnicity, was brought up around 270 times,” which is reflected in the court documentation around Syed's appeal.

Berg was also interested in the significance of Lee’s ethnicity, as she was Korean-American, and her family spoke very little English. The filmmaker tells me: “I asked Detective Massey how difficult it is to investigate a case when it’s within the Korean community, and he said ‘it’s very difficult, because you have the language barrier.’ And I’m just thinking, ‘what could you have asked? What didn’t you understand in this situation?’” Sadly, though, Berg was unable to pursue this line of enquiry: “Massey wasn't ... day-to-day on this case ... so I couldn’t have extrapolated as much as I would have liked to from him because of that. But that really struck me. I had wanted to go further into that.”

Lee’s family declined to be involved in both Serial and The Case Against Adnan Syed. However, a friend of the Lee family does appear in HBO’s documentary, and other attempts were made by Berg’s team to spotlight Lee’s story, which some believe has been obscured by a narrative that is focused almost exclusively on Syed and his conviction. In The Case Against Adnan Syed, Lee is represented through animation, with entries from her diary read aloud to accompany the moving images. Although opinions of the animation are mixed (some love it, some hate it), all the critics appear to agree that giving some sort of agency back to Lee was a praiseworthy decision on HBO’s part.

For Berg, “the visual medium enhances the emotional experience,” which is why she wanted to take the audio story we heard in Serial and see how it played out on TV.

When I ask Chaudry how the two experiences compared — being involved with Serial versus The Case Against Adnan Syed — she replies: “They were very different. With Serial, I turned over the records and stepped aside. Other than when their team needed me to connect them with somebody, or they had some question they couldn’t answer. I was not involved in any of the investigation.” She goes on: “I spent so much more time with the [HBO] team, in filming, being at the courthouse, being at the hearings, being at the events we were doing. It was so much more deep and connected because I got to know the team in a way that I didn’t… I mean, Sarah’s the only one I met from the whole [Serial] team.”

Chaudry, Berg, and the HBO team spent three years putting together The Case Against Adnan Syed, following Syed through his post-conviction relief hearing and the court’s decision to grant him a new trial. However, just as they were putting together the final episode of the documentary, Syed’s conviction was reinstated by The Court Of Appeals, as the New York Times reports. “The timeline was tricky,” Berg tells me when speaking about working in real time. “We just finished [the fourth episode] less than a week ago. So we’re down to the wire here.”

So, with his retrial denied, what’s next for Syed? "We are already preparing to file a couple of pleadings," Chaudry tells me. "And, within a couple of weeks we’ll be filing a motion for the same court to reconsider their decision. We’re collecting a lot of different support briefs from different organisations who want to support the petition. And I think we’re also thinking about working on a petition for the Supreme Court.”

Watch The Case Against Adnan Syed on NOW TV, with the Box Set available to stream in its entirety with the contract-free Entertainment Pass, for just £7.99.