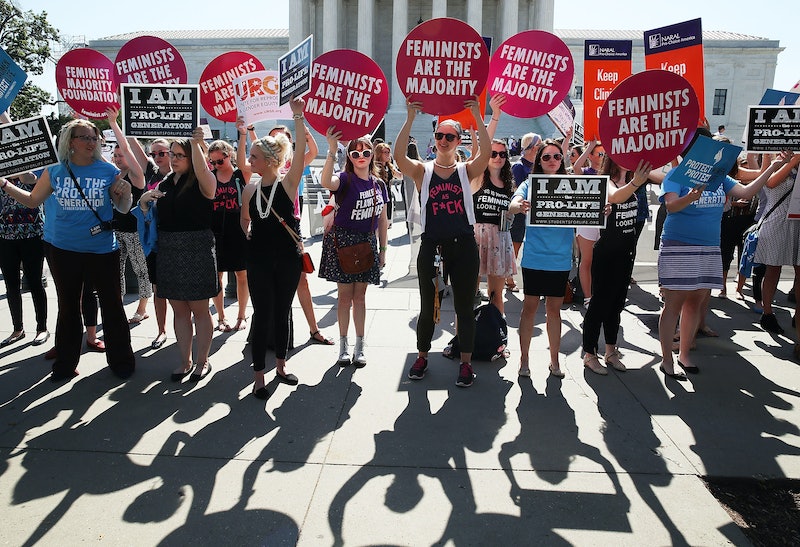 Justice Anthony Kennedy announced his retirement and shortly thereafter, the Trump administration got to work. On the administration's shortlist of 25 potential Supreme Court nominees, six are women. Abortion and Roe v. Wade will be one of the most contentious issues as a nominee goes before the Senate. So, what is potential SCOTUS nominee Amy Coney Barrett's stance on abortion?

The National Law Journal rounded up Barrett's statements about Roe v. Wade and abortion as settled law throughout the years. In January 2013, Barrett said it's "unlikely" to see Roe overturned because of the 1992 case Planned Parenthood v. Casey. (Casey gave us the "undue burden" test required for laws attempting to restrict abortion.)

"I think it is very unlikely at this point that the court is going to overturn Roe or Roe as curbed by Casey. The fundamental element, that the woman has a right to choose abortion, will probably stand," Barrett said at a lecture on Roe at her former employer and alma mater, Notre Dame Law School. "The controversy right now is about funding. It’s a question of whether abortions will be publicly or privately funded."

The former Notre Dame Law School professor and clerk to Justice Antonin Scalia also questioned whether abortion should be debated at the federal level (like the Supreme Court) or at the state level in legislatures. "It brings up an issue of judicial review: Does the court have the capacity to decide that women have the right to obtain an abortion, or should it be a matter for state legislatures?" Barrett said at the lecture. "Would it be better to have this battle in the state legislatures and Congress rather than the Supreme Court?"

One of those confirmation battles was her own. Her nomination to the federal bench for U.S. Court of Appeals for the Seventh Circuit in 2017 was the subject of ire by many pro-choice groups. NARAL Pro-Choice America circulated social media posts chronicling Barrett's anti-choice beliefs when she was up for her appointment to the bench.

"Barrett’s record speaks for itself: She is aligned with extreme, anti-choice organizations, and her writings make clear that she believes Roe v. Wade was incorrectly decided," NARAL President Ilyse Hogue said of Barrett's lifetime appointment to the bench in October. "With a lifetime appointment, Barrett can impose her extreme anti-choice ideology onto women and families for much longer than Donald Trump will occupy the White House."

During Barrett's confirmation hearing, Sen. Dianne Feinstein's line of questioning made Barrett sympathetic to conservative commentators. "I think in your case, professor, when you read your speeches, the conclusion one draws is that the dogma lives loudly within you, and that’s of concern when you come to big issues that large numbers of people have fought for years in this country," Feinstein told Barrett.

That line—"Dogma lives loudly within you"—made an impression. Conservative columnist Ramesh Ponnuru wrote an endorsement for Barrett on Wednesday. "If Roe v. Wade is ever overturned — as I certainly hope it will be, as it is an unjust decision with no plausible basis in the Constitution — it would be better if it were not done by only male justices, with every female justice in dissent," Ponnuru wrote. "So pick Barrett, Mr. President. Let the dogma live loudly on the Supreme Court."

Barrett was confirmed to her lifetime appointment to the federal bench with a 55 to 43 vote. President Donald Trump said he plans to announce the nominee for Kennedy's replacement on July 9.