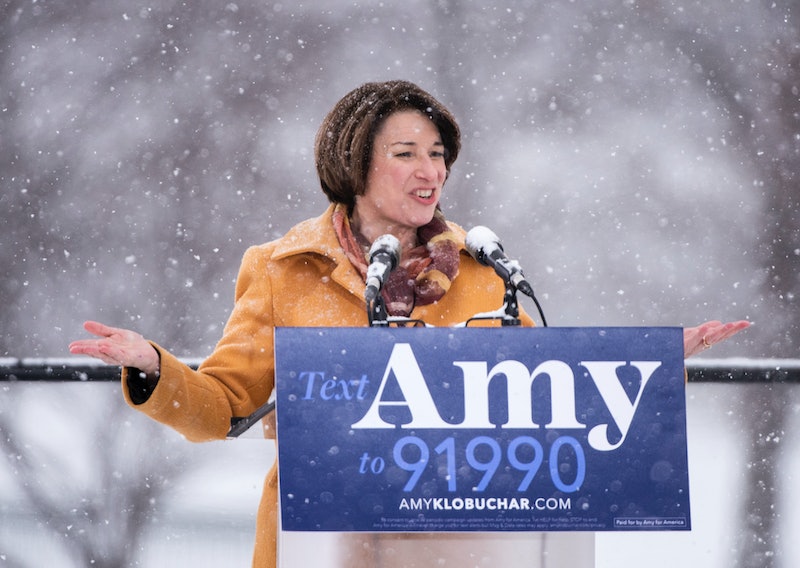 After announcing her 2020 presidential bid, Minnesota's beloved senator wasted no time in addressing the negative headlines that piled up the week before her campaign launch. Sen. Amy Klobuchar responded to reports of staff mistreatment Sunday, telling reporters on hand for her campaign announcement at Minneapolis' Boom Island Park that she has "high expectations."

While the three-term senator didn't directly dispute any of the reports regarding how she has treated staff in the past, she moved to emphasize the positive. "In the end, there are so many great stories of our staff that have been with me for years," she said.

Reports surfaced last week alleging the Minnesota senator was having trouble landing a 2020 campaign manager due to her history of mistreating the staffers who work for her. According to The Huffington Post, at least three people withdrew their names from consideration for the job while some former staffers described the congresswoman as regularly being "demeaning and prone to bursts of cruelty."

A report from BuzzFeed News claimed eight of Klobuchar's former staffers characterized her office as "a workplace controlled by fear, anger, and shame." They alleged Klobuchar regularly demeaned, berated, and humiliated members of her staff. Some also alleged the Minnesota senator would fly into fits of rage where she'd throw objects.

But while some former staffers told The Huffington Post they found working for Klobuchar to be "grinding and demoralizing," others praised the senator's work ethic and credited her office with being where they performed their best work. They suggested that allegations Klobuchar was an abusive boss were the result of "sexist stereotypes about female leaders with high standards," the outlet reported.

"Senator Klobuchar loves her staff ― they are the reason she has gotten to where she is today," a spokesperson for Klobuchar's campaign told both The Huffington Post and BuzzFeed News last week. They continued:

She has many staff who have been with her for years ― including her chief of staff and her state director, who have worked for her for 5 and 7 years respectively ― and many who have gone on to do amazing things, from working in the Obama Administration (over 20 of them) to running for office to even serving as the Agriculture Commissioner for Minnesota. She is proud of them and the work they have done for Minnesota.

Klobuchar announced her presidential campaign on Sunday, urging the crowd at Minneapolis' Boom Island Park to join her in healing "the heart of our democracy" and renewing the country's "commitment to the common good."