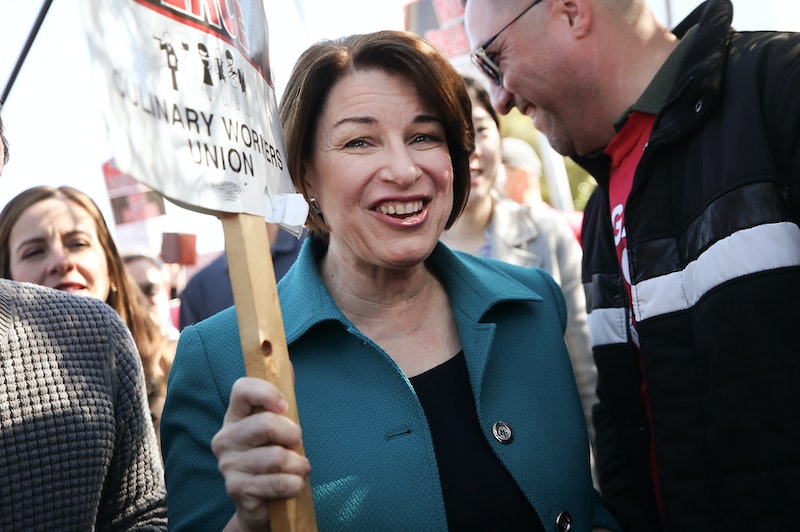 On Tuesday, Minnesota senator and presidential candidate Amy Klobuchar gave opening remarks at a Culinary Union forum in Nevada. According to the webpage for the Union’s NV chapter, 54% of its members identify as Latinx, and it's clear Klobuchar took that into consideration when crafting her introduction: “My name is Amy. When I took Spanish in fourth grade, my name was Elena,” she began. “They gave me the name ‘Me llamo Elena’ because I couldn’t roll my Rs very well.” Klobuchar followed her ill-advised spiel with a more palatable discussion of the importance of Latinx immigrants to American infrastructure, noting that she stands “on the shoulders of immigrants” herself.

As a racially white and ethnically Latinx woman, my first reaction to Senator Klobuchar’s opener wasn't one of offense or disgust, but of pure confusion. In recent debates, last night’s notwithstanding, Klobuchar has earned a reputation for dishing out well-timed, articulate jokes. I’ve rewatched the speech several times and still don't know what her campaign hoped to gain from the anecdote. I struggle to understand how anyone on Team Klobuchar OK-ed a reference to an obscure childhood memory on the basis that it (barely) involves the Spanish language. This came on the heels of an interview with Telemundo last week where she failed to name the President of Mexico. "Greetings to President López Obrador," she said in last night's debate, after glancing down at her notes. Honestly, could she not have prepared a better response?

I, too, took elementary-school Spanish classes. My mother doesn’t speak the language, and my father’s job prevented him from teaching my siblings and me, so I sat in circles with the other kids to learn the words for colors and days of the week. I, too, was given a “Spanish name,” as though “Teresa” was somehow more authentic than the one my Hispanic dad gave me. Some names, like Elena or Teresa, are common within Spanish-speaking populations — but there's no such thing as a “Spanish name.” The fact that Klobuchar would use that concept to liken herself to a group that faces abhorrent discrimination is not only laughable. It’s inexcusable.

Klobuchar could have opened her Culinary Union speech by acknowledging its high percentages of immigrant and Latinx members. She could have offered her condolences for the presidential administration’s persecution of innocent people at the border. She even could have brushed up on her Spanish à la Beto, Booker, and Buttigieg, extending a welcome to all the hispanohablantes in attendance. (Yes, that’s cringey, but it at least demonstrates effort.) There are far better ways to acknowledge a community to which you don’t belong than by whipping out a 50-year-old story that resonates with nobody.

My views are by no means reflective of the entire Latinx population, but it's fair to guess that Klobuchar's story won't do much to garner support from Latinx voters in Nevada's caucuses on Saturday: In a survey earlier this month, she was polling at just 1% with Latinx Nevadans. Elena, I hope it was worth it.