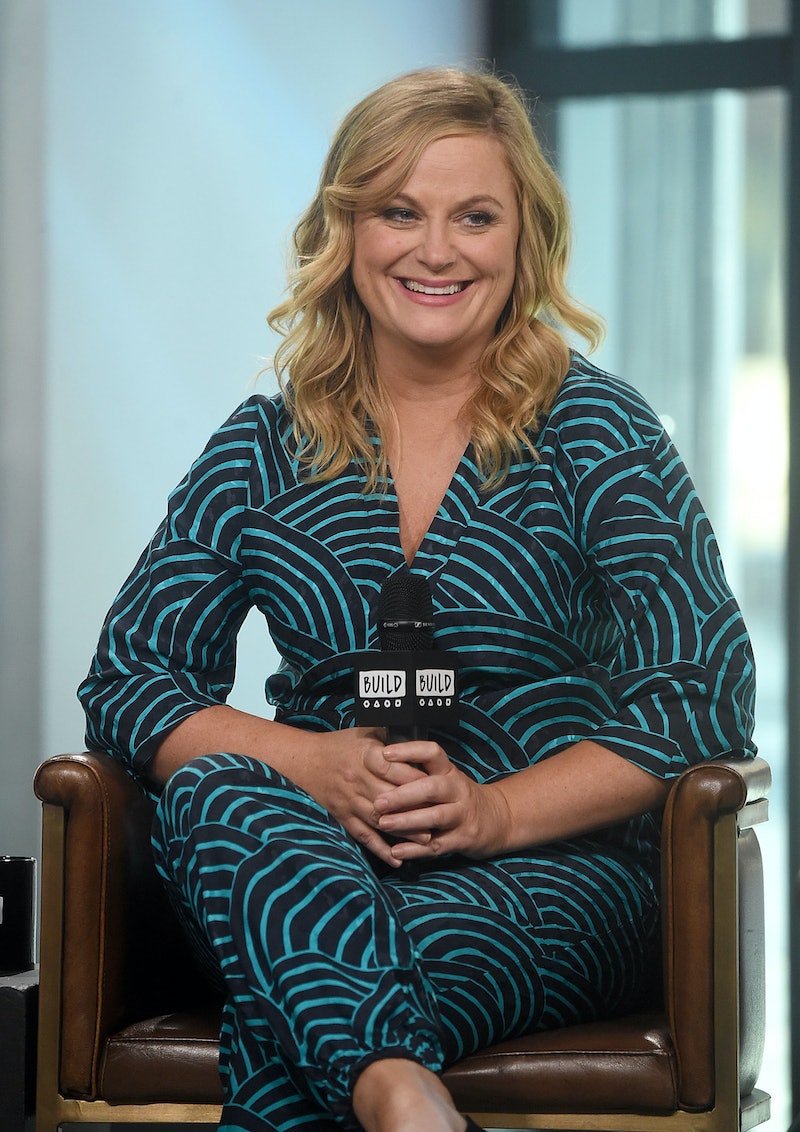 There's a lot audiences know about Amy Poehler. She's a comic, an actor, a writer, a director, an activist, a mom. She was on SNL for many years where she hosted "Weekend Update" with Tina Fey. She played eager government employee Leslie Knope for seven seasons on NBC's Parks and Recreation. She stars opposite Will Ferrell in The House, out June 30, and the list goes on. But there are some lesser-known tidbits about the 45-year-old you might not know, and the "trivia" or "did you know" section of IMDB offers a few of these facts.

So when I sit down with Poehler during the third weekend of June to talk about The House and beyond, she enlightens me to what's true — and not-so-true — on the aforementioned page.

Behold, a handful of IMDB trivia "facts" found on Amy Poehler's IMDB page, fact-checked by the woman herself.

"I think Aziz Ansari may have started that or planted that," she says of her Parks and Rec co-star. "And by the way, no disrespect to Bone Thugs, or BTH as I like to call them, but I wouldn’t say I’m a huge fan. I mean, I will meet them at the crossroads, but I don’t know if I know every one of their songs."

IMDB Fact: Is only seven years older than Rachel McAdams, who plays her daughter in Mean Girls.

"Yeah," she says. "Rachel was not that much younger than me. We were very close in age."

Though she quickly cleared that up, Poehler was excited to reminisce about her time on set. "That was such a fun part to do. And I will say this about Rachel McAdams: not only is she and was she a peach, but when she got on camera, I remember us all standing behind the monitor looking at her and being like 'Ooh, that’s what a movie star looks like.' Like her skin was lit from within, she was stunning to look at. It was perfect casting."

As if we had any doubts.

"I cannot confirm or deny any of those nicknames," Poehler says with a grin. "Those sound like rides at a really broke-ass carnival."

Before we wrap up, Poehler offers a final fact not found on the website. "Was once a vampire," she says.

Well, there you have it. Watch out for Poehler's sharp wit — and teeth.

More like this
'Derry Girls' Creator Teases Exciting Spin-Off Starring These Three Characters
By Olivia-Anne Cleary
Becky G Once Had A Fear Of Speaking Spanish. Now She's Topping The Latin Charts.
By Tess Garcia
Shocked Fans & Former Co-Stars React To Ray Liotta’s Death At 67
By Grace Wehniainen
'Stranger Things' Star Joe Keery Is Dating An "Indie Scream Queen"
By S. Atkinson and Grace Wehniainen
Get Even More From Bustle — Sign Up For The Newsletter