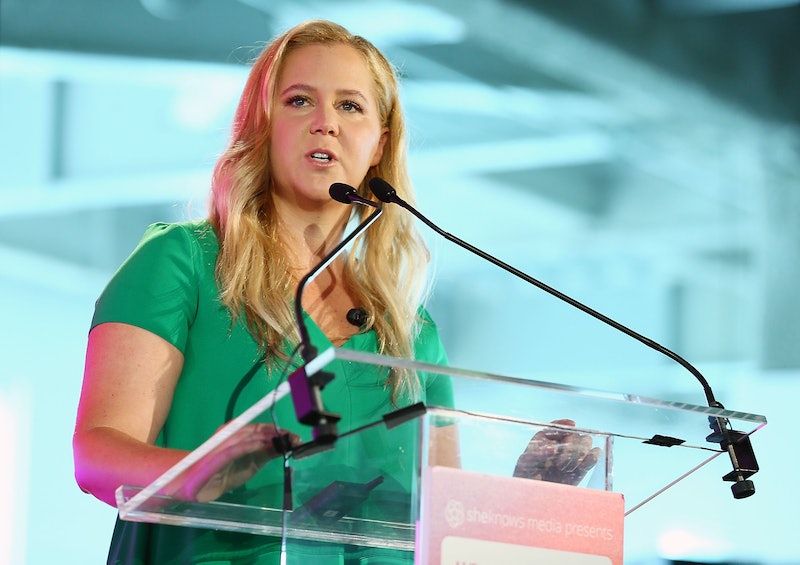 The star of Comedy Central's hit show Inside Amy Schumer is returning to TV. Amy Schumer will return to TV with her new show Love, Beth. The comedian is set to create, direct, write, produce, and star in the upcoming scripted comedy set to air on Hulu. While a premise for the series is still under wraps and will be detailed at a later date, the ten episode, half-hour comedy series is slated to launch on the streaming service in late 2020, as per Hulu’s press release. Love, Beth marks Schumer’s first return to TV since her hit sketch comedy Inside Amy Schumer, which ran for four seasons on Comedy Central and propelled the comedian into fame. Inside Amy Schumer’s Kim Caramele and Kevin Kane will serve as executive producers on the new Hulu scripted comedy.

While it had been announced that Inside Amy Schumer would return for a fifth season, Schumer revealed in 2016 that the show was on hiatus. In a series of tweets at the time, the comedian cleared up speculation that the Emmy-winning series had been cancelled. “Doing Standup and focusing on writing more for the next year at least. We are slated for a season 5 but not in the foreseeable future,” she tweeted in August 2016. She later added, “I'm grateful @ComedyCentral is giving me this time to work on other projects.”

Indeed, Schumer has had her hands full since then. Since Inside Amy Schumer’s Season 4 wrap, the comedian has starred in big screen comedies such as 2015’s Trainwreck and 2018’s I Feel Pretty. In 2015, the comedian released an HBO standup special Amy Schumer: Live at the Apollo, followed by several Netflix specials thereafter. In 2016, she diverged from standup and dipped her foot into Broadway on the Steve Martin-penned play Meteor Shower. Schumer has since also published her first book, a memoir titled The Girl With the Lower Back Tattoo.

More so, Schumer welcomed her first child, a son named Gene, in May of this year with husband Chris Fischer. Shortly after Gene’s birth, Schumer took to Instagram to share an adorable photo of the tot and called on her followers to support Immigrant Families Together. “Here is our son Gene," she captioned a photo of a sleeping Gene. "He likes looking around and laughing at his toy the black and white butterfly. Always down for a nap and a good cry if the poops are on the reg he wanted me to tell you guys he wants you to volunteer or donate here @immfamtogether”

Throughout her pregnancy, Schumer had been candid about her pregnancy struggles that led to the cancellation of part of her comedy tour. The comedian suffered from hyperemesis gravidarum, a severe type of nausea during pregnancy also exhibited by Kate Middleton. “Women are the shit. Men are cool and whatever but women are f*cking warriors and capable of anything,” she reflected in a lengthy Instagram post. “Hyperemesis is real and it’s awful.”

With several films, a book, and a Broadway show under her belt — not to mention, a new baby — it's been a busy last few years for Schumer. The comedian's long-awaited return to TV is an exciting one.