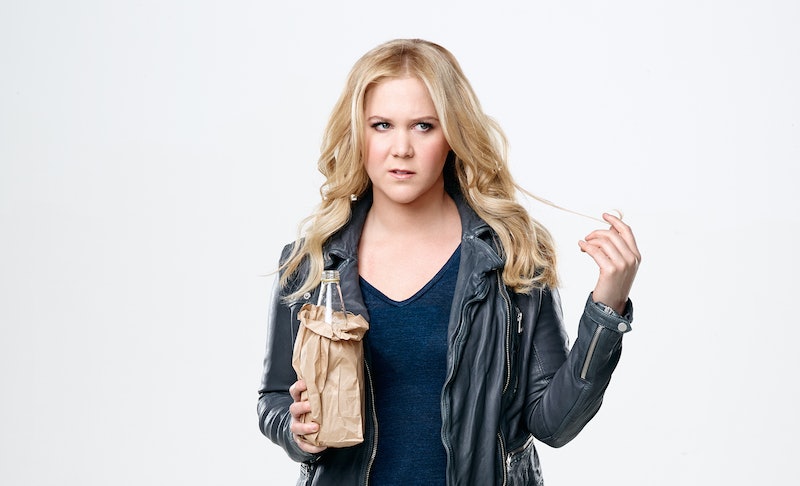 I'm sorry. You're probably busy doing something super important, and I'm sorry to waste your time, but damn Amy Schumer is on fire this season. The "sorry" skit on Inside Amy Schumer got really deep, even though it involved a woman dying from a hot cup of coffee, because that's just how genius Schumer's brain works. During the skit, women apologizing was the name of the game, and it was a spot on display of how women are essentially conditioned to apologize for things they have no business apologizing for. And it was 100 percent accurate.

The skit took place at a Females in Innovation conference, which is awesome, feminist, and so powerful. Schumer plays a scientist who has mastered something so intellectually advanced, I don't even know if I could spell the words correctly (neuroprotective peptides). Right off the bat, a theme arises as the moderator of the conference, a man, consistently mispronounces the panel women's names and career fields. Each time this happens, the women on the panel weakly apologize into the microphone for his mistakes. They even apologize for clearing their throats when going to speak. And I'm not talking about a "I've got to make some really offensive noises for the next eight minutes as I get a popcorn kernel out of the back of my throat" noises, I'm talking about a little, itty-bitty clear of the throat. Dainty, if you will.

When one woman asks for water, and a stagehand brings her a soda, she apologizes for being allergic to caffeine and asks for water (and that point, he brings a coffee). Schumer's character, who works with peptides, is asked if she works with Pepcid for stomach issues (uh, hi, huge difference). When the man in the audience is disappointed that Schumer can't help him, she offers to leave the panel, go out and buy him something for his stomach, and even throws out an open invitation to buy the other women things. Girlfriend kicks ass in neuroprotective peptides, she's got nothing to be apologizing for.

The pièce de résistance of the skit was when one woman had scalding coffee poured all over her, lost her limbs, and died on the stage at the conference. This wasn't the big "ta-da" because it was violent and bloody, but because her final words were: "It's all my fault." (Spoiler: The stagehand, who clearly doesn't know what caffeine is, was the person who dropped the coffee on her. He did not apologize for killing her.)

Schumer is just reiterating what we already know, but let's say it again: Ladies, we've got nothing to apologize for when we're kicking ass and taking names. Own your awesomeness and never apologize for it.