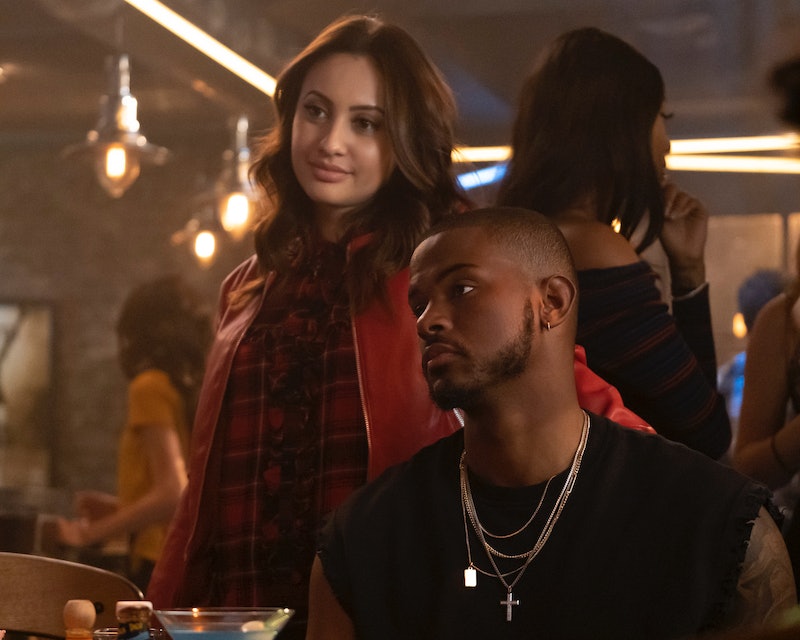 In a generation of undefined romances, there's a clear reason why Facebook created the "it's complicated" status update. Suffice it to say that Ana and Aaron's relationship on grown-ish officially checked that box in the June 26 episode, titled "Tweakin'." Let's be honest, ever since Aaron got *that* look on his face while lying in bed with Ana at the end of the previous episode, this was all inevitable. And it seemed like he'd come so far from his original relationship description that he gave Zoey when he let slip that he and Ana had been "kickin' it and stuff...naked."

All of this sudden gray area and conversation around labels actually hearkens back to Zoey and Ana's original "girl code" argument, in which the young Ms. Johnson explored the new "situationship" phenomenon. From Aaron pulling his hand away from Ana, to him awkwardly turning his head so she could only kiss his cheek, there was obviously trouble in paradise. And what became blatantly clear from the jump was that Ana and Aaron were definitely not on the same page when it comes to their relationship...or whatever it is.

Thus began the juxtaposed guy and girl dissections of exclusivity and defining relationship statuses. Aaron reveals he's "definitely still feelin'" Ana, though he, Doug, and Vivek establish that he's more on "the prologue" while she may be onto the "movie adaptation." And poor Ana revealed to Zoey, Jazz, Sky, and Nomi that she'd already made the rookie mistake of assuming she and Aaron are exclusive. (Side note: Who knew handholding was such a divisive concept?)

Well, when Aaron insisted he's not "boo'd up," then was conveniently approached by another woman, and — gasp — essentially agreed to hook up with her, it seemed that his and Ana's undefined status was heartbreakingly more clear. Look, was he technically doing anything wrong? No. (Ana even, later, agreed on that point.) But... viewers who have been in Ana's shoes know all too well how devastating it is to be on her end of this scenario. After all, she risked her friendship with Zoey over this guy, and, for what?

After a moment that surely had most fans collectively holding their breaths, however, Aaron showed some promise, unable to go through with the hookup. Maybe he was more into Ana than he was allowing himself to accept. The vulnerability that comes with love is scary, right? And he did mark her bedside lamp with their initials in the previous episode, too.

With the ambiguity of their relationship status (and Aaron's obvious aloofness) sending her into a tailspin, Ana got some sage advice from Zoey — who was coming off of a “Luca Jae Hall”-level high — that really got to the heart of the matter. Instead of spending so much time worrying about Aaron wants, why not take back her power and focus on what she wants — and, then, go after it?

And what did Ana want? To be in an explicitly defined relationship with Aaron. Remember that part about love making you scarily vulnerable? Ana went there, wore her heart on her sleeve, and laid it all out for Aaron. Just when it seemed like they were about to finally be on the same page — in a truly cringeworthy moment — Aaron dropped the gut punch that what she wants isn't something he's ready for right now. So Ana took back her power in a different way than expected, asking Aaron to leave. Heartbreaking, but, nonetheless powerful.

So, by episode's end, it seemed that Aaron and Ana aren't going to be endgame after all. Honestly, though, all signs kind of point to Aaron just having cold feet. Hopefully, if and/or when Aaron comes around, he won't have pushed Ana away to the point of no return — not that she should wait around for him either. Stay tuned, grown-ish fans...