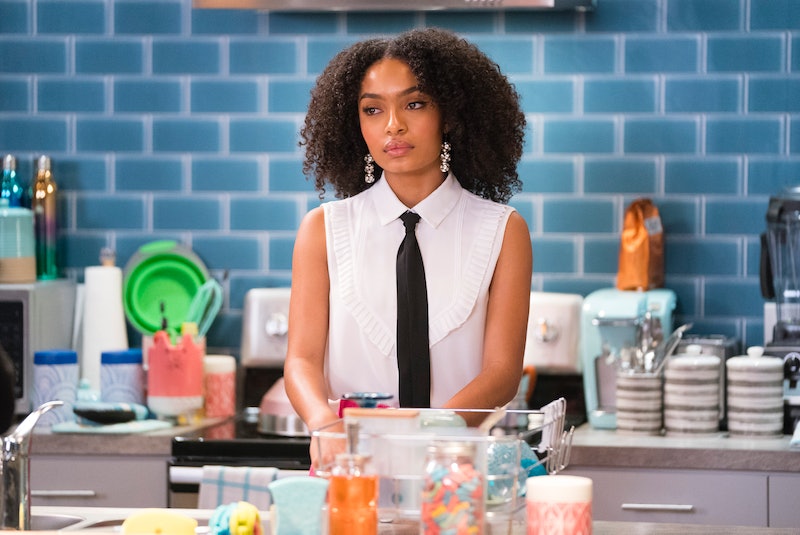 Someone's finally getting a lesson in what it means to work hard for the money. Given the trajectory of Zoey's job hunt on grown-ish's June 19 episode, "Can't Knock the Hustle," the Johnsons' golden child had a lot of learning to do along the way though. Sure, nobody wants to do grunt work, but you've gotta start somewhere, right? And hasn't almost everyone worked minimum wage jobs in high school and/or college? For Zoey, that reality check took some time — and several failures — to finally sink in, however.

After Zoey's dad cut her off in the wake of her chemistry final cheating scandal, the Cal U sophomore finds herself in a financial crisis that she jokes "hit harder than when the internet made Blockbuster its b*tch." Even so, she figures Dre is just bluffing and will soon return to bankrolling her lavish lifestyle, which includes designer clothing and even a "Japanese soda subscription box."

That is, of course, until she discovers her car being towed. "I knew this man had a petty bone, but this is another level," she says at the top of the episode. "Like Blac Chyna having a whole-ass revenge baby type level."

Seeing your car being hauled off by a tow truck would be an immediate wake-up call, right? Not for Zoey Johnson. Instead, she resorts to some "tricks up her sleeve" and tries to sweet talk her parents. Although that doesn't go so well, it does yield a hilarious text video of Dre crying because, as Bow types, it's hurting him more than it's hurting Zoey.

What's a girl to do? According to Jazz and Sky, who "literally have to run for their lives" to support themselves, it's basically a no-brainer. "Get a job, b*tch," they tell their pal with some amazing synchronized clapping. (Worth noting: Dre and Bo are still covering Zoey's college tuition, housing, and books.)

It doesn't take long to see this is going to be an issue. When Sky suggests Zoey try her hand at dog walking, she replies, "I can't walk dogs in Givenchy." Enter Jazz with the truth bomb, telling Zoey to "stop acting like you're too good for this."

That advice seemed to fall on deaf ears, however, as Zoey reminds her friends of her cushy Teen Vogue internship and that all of their suggestions "would be taking a step backwards." Jazz's alternative suggestion? Zoey should take a $20,000 offer to sell her eggs. But, yeah, that's probably not happening.

Luckily, Zoey lands a job at a high-end boutique, with Luca's help. But, even that only lasted a day, since Zoey claims her boss couldn't see past her envy and told her "to go home...forever." That, or maybe her firing was due to the fact that she essentially refused to do the job she was hired to do — and got caught giving her boss the finger (actually, two fingers) in the process.

Lesson learned, right? Still no. Zoey's takeaway from the experience was that she's "better at boutique shopping than boutique working" and, instead, wants to advise, style, earn commission, and "just be fabulous."

After "scouring the internet and finding nothing but entry-level minimum wage weekend jobs," Zoey finally finds a higher-paying gig as "living breathing art," "basically napping in a five-star hotel." Translation: She just sits in a glass box, wearing a hot pink wig and mini-dress.

From her "human aquarium," Zoey spots Nomi making out with Professor Hewson, and following a condescending confrontation, Nomi decides it's the "perfect job" for Zoey since it involves "doing nothing while looking down on everybody else."

OK, now Zoey is finally seeing the light. Sort of, anyway. "What I realized was that I'd been acting pretty gross and stuck-up to my girls about this whole work thing," she says in a voiceover. "And as much as I thought Nomi was making some wrong decisions in her personal life, she was right about one thing: I was capable of more than sitting in a box and looking pretty."

It's not until Zoey tries to sell some used textbooks at the campus bookstore where Doug works that she finally, truly sees the light, however. She scoffs at both the $38 he offers her and, more importantly, his attempt to help her get hired at the bookstore because, as she says, it isn't "the path to fashion greatness." Here, Doug gives her arguably the best reality check of the episode.

"I'm not just here to be stacking books. I'm learning the ins and outs of running a business," he tells her. "Zoey, you're taking a shortcut to the endgame but you're skipping your opening move ... Maybe if you would've done your job and worked hard, they would've noticed and you would've gotten an opportunity to do something doper. Building blocks to greatness: Patience and work ethic, b."

Cue an imaginary light bulb going off over Zoey's head. "I realized I'd spent so long trying to find the right job to fit my vibe, but what I should've been doing was finding the right attitude to fit the job."

Yes, Zoey is now the newest employee at the bookstore. And even Dre is proud of her — though he reminds her via text that she's "still cut off." And with that, all those who are working hard — even if it's not at their dream job — can finally rejoice and welcome Zoey to the club.