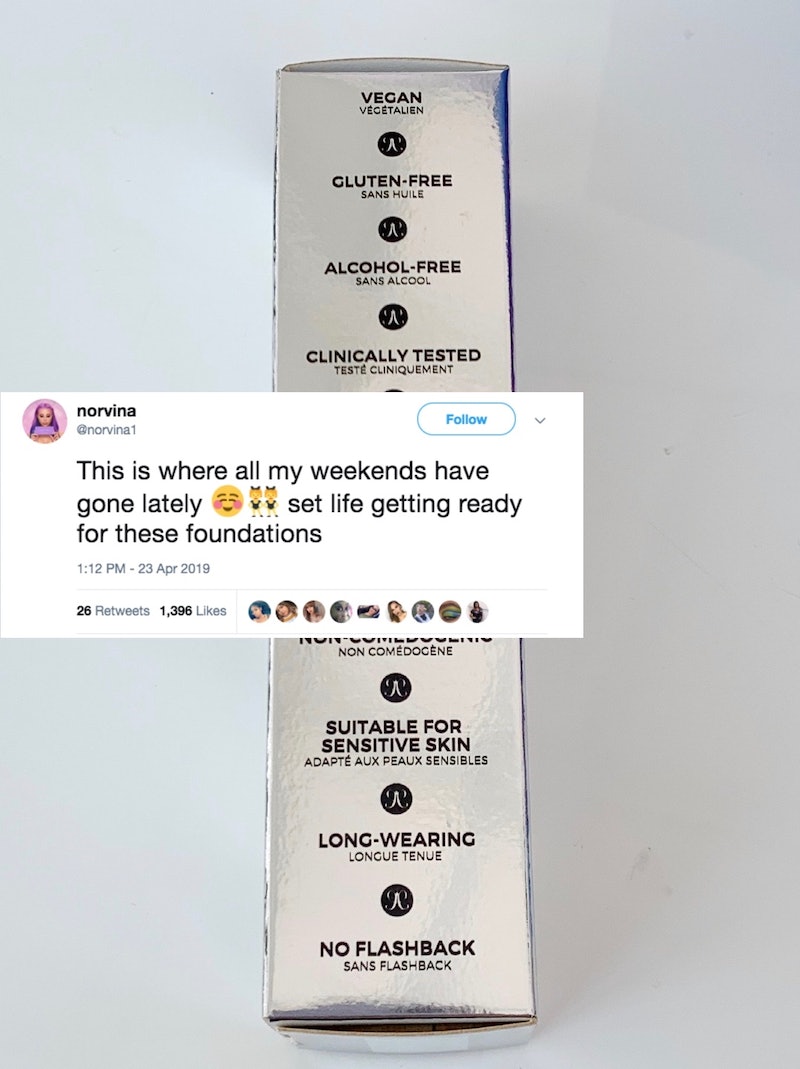 If the past year was the year of the eyeshadow palette, then 2019 may just be the year of the foundation. Another one appears to be on its way: On April 23, the president of Anastasia Beverly Hills teased a new foundation that comes in 50 shades. Get ready to add another complexion product to your wish list because Claudia Soare — aka Norvina — took to Twitter and Instagram to give fans a tease.

On her Instagram account, Soare posted multiple stories explaining that the brand is launching a full range of foundation in 50 shades. In the video, fans get a glimpse at the models for the shade range, and the different options certainly seem promising. Then, on Twitter, Soare went into even more details about the upcoming foundation launch.

According to the Anastasia Beverly Hills president, the new liquid foundation will be launching in August. She didn't give a specific date or a price, but Bustle has reached out to the brand for comment. While many of the most recent foundation launches have been matte formulas like Morphe's Fluidity, Soare says in a tweet that the new Anastasia Beverly Hills foundation has a dewy finish and is so skin-like that you don't even need to set it.

Soare also posted a photo of the packaging to given fans even more of a rundown about the foundation formula. According to the photo, the base product will be suitable for sensitive skin types and is vegan, gluten-free, and vegan. Not bad, right?

There's a specific reason Soare chose to let Anastasia Beverly Hills fans know about the new product so soon (other than her excitement). According to the brand president, retailers are asking her to limit the number of foundations sold in stores. Essentially, they don't want to carry all 50 of the shades and want Soare to pare them down for in-store sales. Soare, obviously, isn't keen on that idea saying in her video, "If someone were to tell me to scale back 20 shades, what am I supposed to do? Who am I supposed to take off? Everyone's important."

Thankfully, though, fans love of the shade range seems to have had an impact on retailers. Soare says that they are now calling asking for the full range.

As for fans' thought on the new product, they certainly seem excited on Twitter.

The dewy finish seems to have fans unable to wait for the August launch.

Some fans just had to praise Soare for her dedication to inclusion.

The general consensus from fans certainly appears to be that August can't come soon enough.

Of course, the foundations aren't going to Anastasia Beverly Hills' only big launch this year. In fact, the brand has already dropped a few popular items like its ultra-colorful Riviera palette, three new loose highlighters, and a dewy setting spray that may just be perfect with the new foundation launch.

While the new Anastasia Beverly Hills foundation won't be released under August according to president Claudia Soare, with 50 shades and a dewy formula, the new launch certainly seems worth the wait.