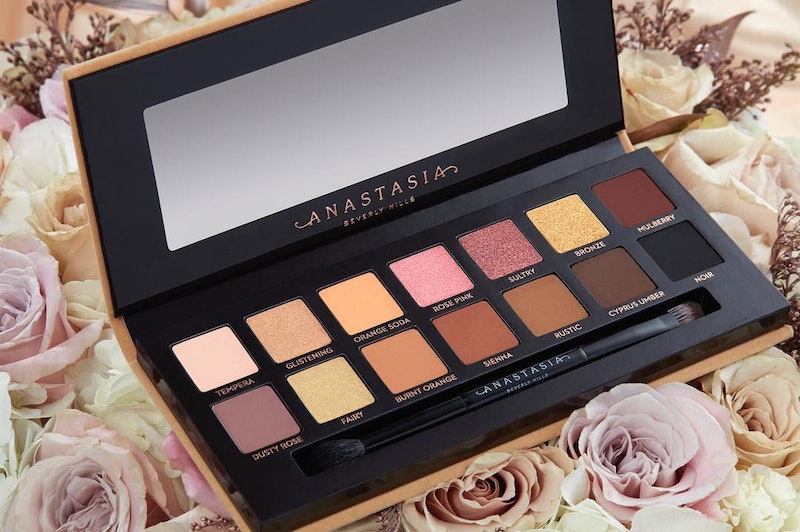 Everyone wants to see the latest beauty launches. Whether it's a swatch, a sneaky black and white image, or just the packaging, major brand announcements are highly anticipated, but when a leak happens, it's just not cool. That's exactly what has happened to Anastasia Beverly Hills' new palette. The latest launch from the high-end brand has officially been leaked, and while the palette is stunning, the leak is totally not cool.

On Monday, photos began surfacing of a palette featuring gorgeous neutrals, mauves, and pinks in the classic Anastasia Beverly Hills palette packaging. It quickly began to get attention on the internet and was said to be the brand's latest eyeshadow creation. Those rumors turned out to be true when the brand confirmed that not only was it their product, but that images had been released early.

Bustle has reached out to Anastasia Beverly Hills for comment.

In a post to their Instagram account that showcased the new product, the brand explained that they were saddened when the palette leaked. Not only had they planned the announcement, but they and their team had worked hard on both teaser images and an announcement video.

The brand writes, "You will still see it all, but the element of surprise is gone, however before more of you see leaked photos of SOFT GLAM, we want a chance to show those of you that haven’t yet seen the leaked photos."

Anastasia Beverly Hills went on to reveal a few of the details about the palette in the post as well. Soft Glam is the official name, and fans can expect to see the launch in March. Brand president Claudia Soare — also known as Norvina — took to her Twitter to lament the leak and justifiably call out those who allegedly think it appropriate to divulge the creative work of artists without consent.

In her Twitter thread, Soare expressed her frustration over accounts leaking the hardwork of both she and her team. She calls out the alleged source of the leak citing motivations for doing such things as "disrespectful and selfish."

Since the leak, the brand has revealed the palette themselves. Despite their own announcement, however, it is still a sad turn of events for Soare and her team. Unfortunately, it's also not the first time she's had to speak out against leaks.

In May, what would ultimately turn out to be the ABH Subculture Palette leaked online. Yet again, her team and their hard work was seen before they allowed it, and it was again it seemed to be a devastating time for both Soare and the brand.

Now that Soare and ABH have officially announced the palette, fans are rallying around the brand and praising both she and the palette itself.

Guru ShaaanXO expressed her excitement over the new addition.

Others apologized to Soare but reassured her that the palette looks gorgeous.

For some, the excitement was mixed with sadness for the brand.

The leak definitely puts a damper on the announcement, but ABH's fans still love the brand, and the brand loves them. In fact, in the reveal post on Instagram, they thank their loyal fans for their support during the whole ordeal.

If you want to see more of Anastasia Beverly Hills' Soft Glam Palette, Soare has begun swatching the shadows over on her Snapchat account. Again, the circumstances surrounding her decision to do so is awful, but the palette, does look stunning.

To see more swatches of the palette, head over to Soare's Snapchat, and if you love Anastasia Beverly Hills, show the brand some love. Leaking a palette that a team has worked hard on is clearly devastating for a brand. Considering this is the second palette leak in less than a year, it's doubly unfortunate. Anastasia Beverly Hills, however, is clearly a resilient brand, and they've got one killer product on their hands.