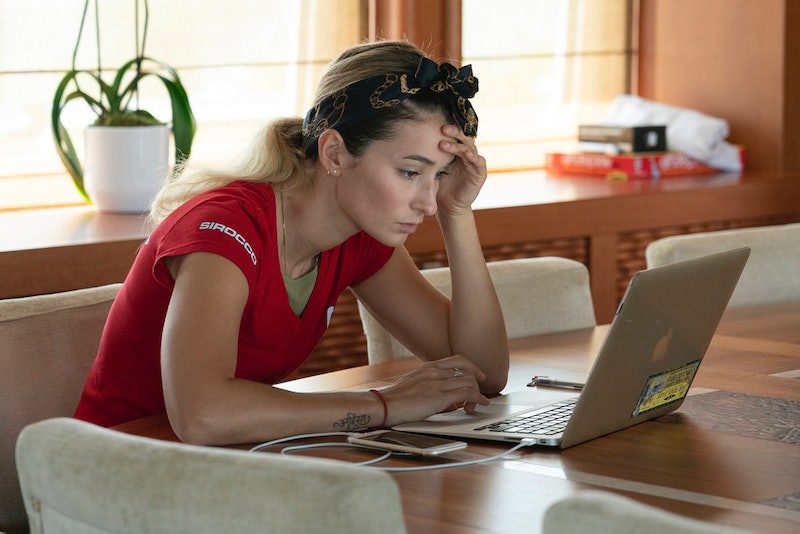 It's yacht season on Bravo, aka Below Deck Mediterranean is returning with brand new episodes filmed in the south of France. The new season features many new crew members, including Below Deck Mediterranean star Anastasia. The new Third Stew is used to traveling abroad. According to her Bravo bio, she was actually born in the Republic of Georgia. That's a country between Europe and Asia for any of my fellow geography-challenged friends.

When she was two, Anastasia moved to America and began her life at sea at a young age. Her bio says she dated a young captain who was the first to introduce her to the seafaring lifestyle. Now she's working on a mega yacht alongside some of the best in the business. Anastasia will have to work hard to keep up, and she's not afraid to do so. "It doesn't matter what I'm doing, I'm going to do it 110 percent," she said in a teaser clip for the show. "I got a B minus once and I was like, 'My life is over!'"

Anastasia's perfectionist approach to life could cause drama on the ship if not everyone sees eye to eye with her. In another clip from the show, she described herself as "super Type A" and added, "When things don't go my way, it's like a big f*cking deal." Anastasia also teased a dramatic season on her Instagram. She posted a clip from the show and wrote in the caption, "Cant wait to re live all the craziness with you guys."

Off the show, though, she seems to be a little more zen. Her Instagram shows she's way into yoga, and she's SUPER talented. Like, are you kidding me with this pose?

Much like how her fellow crewmate Jack found a girlfriend around October of 2018 (perhaps just after filming had concluded?), Anastasia met someone last September. She called Evan "#mypumpkinspice" in one of their first photos together, and she documented their time traveling around on her Instagram. (His Instagram says he's "Digital Nomad" and a "World Traveler" so they had a lot in common.)

However, the last time he showed up in one of her photos was December 2018, so it's possible they're no longer together. Aside from photos of her in stunning tropical locations and pictures with Evan or promoting the show, Anastasia has a few other cool pics on her page. One of them is this awesome throwback of her and her mother while they were presumably still living in Georgia.

"You're a goddess and the strongest woman I know," Anastasia wrote in the caption. "Hope I can have your strength, courage, and even just 1/5 of your skills in the kitchen one day. Love you mama."

With regard to her skills in the kitchen, Anastasia's Bravo bio says her mom is a pastry chef. That had to be a fun perk while growing up. And, while she may spend many of her days on the high seas or on tropical islands, Anastasia has been known to hit the slopes as well.

She's a well-rounded perfectionist, as most of them strive to be. How will her Type A tendencies affect the rest of the crew on the ship? Only watching Below Deck Mediterranean will help you find out. The new season starts June 3 on Bravo.