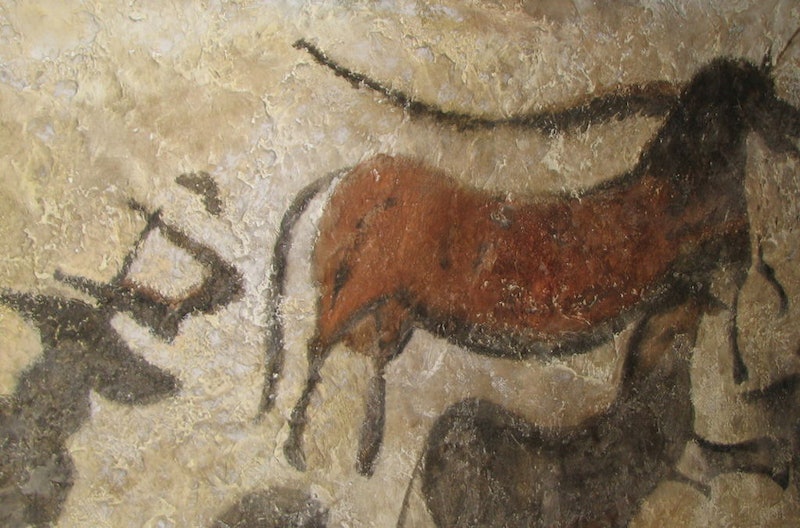 While some historians credit the ancient Greeks with the development of astronomy, new findings show that its origins are likely far more ancient. According to a study published in Athens Journal of History, researchers now think that well-known prehistoric cave drawings actually show constellations. This interpretation show that ancient peoples probably had a much more in-depth understanding of astronomy that was previously thought.

Researchers Martin Sweatman and Alistair Coombs, from the Universities of Edinburgh and Kent, previously studied ancient European cave paintings throughout France, Germany, Spain, and Turkey, and discovered that the drawings don’t just depict animals and hunting, Business Insider reports — they show maps of stars. These findings suggest that ancient peoples kept track of time via knowledge of the stars, and understood the relationship between time, the position of the stars, and the rotation of the Earth’s axis.

The discovery of this astrological phenomenon, called the precession of Equinoxes, was previously attributed to the ancient Greeks, according to Forbes. The same time-keeping method is used throughout all the studied cave paintings, even though the art was created at different times over tens of thousands of years. “Early cave art shows that people had advanced knowledge of the night sky within the last Ice Age. Intellectually, they were hardly any different to us today. These findings support a theory of multiple comet impacts over the course of human development, and will probably revolutionise [sic] how prehistoric populations are seen,” said Sweatman in a recent statement from the University of Edinburgh.

“Astronomical knowledge could have helped these prehistoric people to navigate on ocean voyages, changing our understanding of how humans migrated around the world,” writes Forbes. According to a press release, the world’s oldest known sculpture, called the Lion Man of Hohlenstein-Stadel Cave from 38,000 BCE, also shows this recurring, ancient system for keeping track of time.

The study’s authors revisited earlier findings from a study of stone carvings at Gobekli Tepe in modern-day Turkey, which is considered a marker of a significant comet strike around 11,000 BCE. Researchers also decoded the well-known Lascaux Shaft Scene in France. The piece, which features a dying man surrounded by many animals, may memorialize another comet strike that took place around 15,200 BCE, researchers said in the press release.

“The team confirmed their findings by comparing the age of many examples of cave art — known from chemically dating the paints used — with the positions of stars in ancient times as predicted by sophisticated software,” said the University of Edinburgh in their statement. According to the study, this research significantly revises previous perceptions of the ancient peoples, as “this level of astronomical sophistication was known already within the last ice-age, and very likely by the time Homo sapiens entered western Europe around 40,000 years ago.”

Given that such complex knowledge of astronomy and ancient star systems existed long before was previously thought, it’s clear that prehistoric peoples were great at keeping track of time — and long before the ancient Greeks were too.