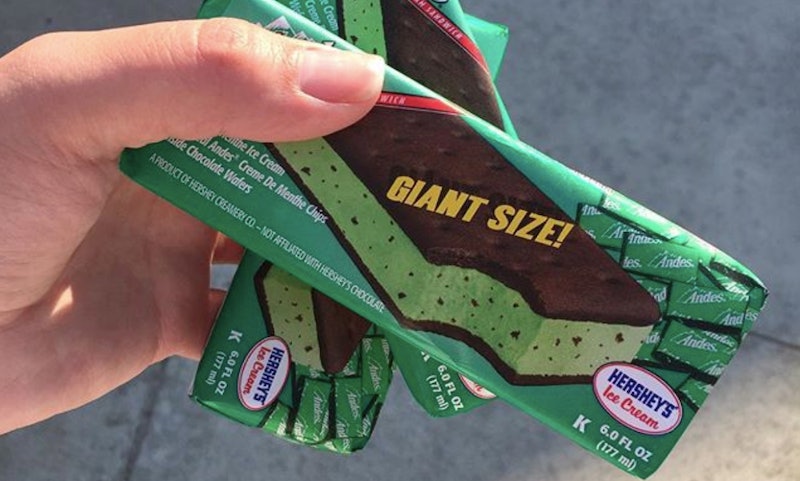 Allow me to take a moment to praise Andes mints, the unsung hero of chocolate candies. They may fly under the radar, but it is the Unspoken Law Of Andes Mints you that if have just one you inevitably have to eat a minimum five more. Those who respect this sacred law might be surprised and pleased to discover that there is, in fact, an Andes mint ice cream sandwich version of the beloved candy, which is basically a gigantic cold Andes mint you can take to the face.

Considering a large portion of the U.S. just endured a heat wave of such epic proportions that I showed up to the theater to see Lion King so fully drenched in sweat that the kid handing me my ticket flinched, this ice cream PSA could not come at a better time. After all, what's more refreshing than ice cream and mint?

Per Best Products, while this doesn't seem to be in all major retailers the way it certainly deserves to be, Instagram users have reported sightings at gas stations, restaurants, and casinos; Instagram user @ImperfectlyPatricia shared an image of the ice cream bars in Indiana.

It is worth noting that this isn't the only underrated delightful ice cream treat that Hershey's is responsible for — the company also has a pretty extensive line of ice cream cups, cones, sticks, twister cones, and, of course, sandwiches, all of which you can peruse on the Hershey's ice cream site. But I'd argue that despite all of the peanut buttery, cookies and cream-esque flavor combos that Hershey's currently boasts, none are quite so iconic as a giant Andes mint ice cream sandwich, because this seems to be the very medium that an Andes mint was destined for; like a Pokémon that finally reached its final evolution, its peak optimal form.

And for all the other Andes mint stans out in the wild, even if you can't find this ice cream, you have other options at your disposal — not only can you buy your beloved Andes mints year round, but there's an Andes mint coffee pod, a giant tub of 240 Andes mints, and even a daringly bold "Toffee Crunch" Andes variety, all of which are available on Amazon right now. Basically, if you're one of those people who's salty about having to wait for the holiday season for all the quality mint-flavored things, you could be out on the internet right now living your best Andes-fueled life.