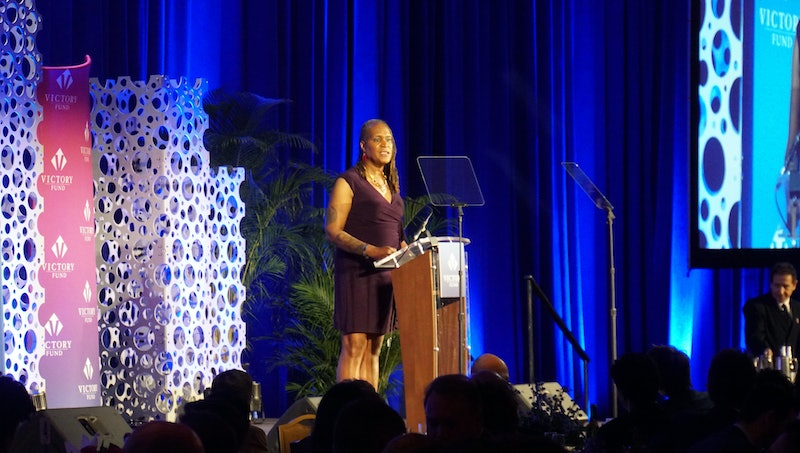 On Tuesday night in Minnesota, Andrea Jenkins won a Minneapolis City Council seat, making her the first openly trans woman of color elected to any U.S. public office, and one of two trans women to win on Election Night 2017. As an outspoken advocate for racial and gender equality in the United States, she's sure to influence some major change in the city.

Jenkins won in Minneapolis's Eighth Ward, according to The Advocate, filling a seat left vacant by former Council Vice President Elizabeth Glidden; Jenkins served as a policy aide for Glidden up until her retirement. Jenkins' run for office was endorsed by the Democratic-Farmer-Labor Party (the Minnesota affiliate of the national Democratic Party) and local publications, including Minneapolis' Star Tribune. The paper said she was highly qualified, The Advocate reported, and well-prepared to take on her new role on the council.

While the race is officially nonpartisan, Jenkins is a Democrat. Throughout her career, Jenkins has worked to bring commerce and activity back into struggling neighborhoods, by supporting new small businesses and art venues. However, she also stresses that revitalization of a new area shouldn't come at the expense of poorer communities. Jenkins is also a vocal advocate for the LGBTQIA community and has helped organize the Trans* Equity Summit, an event that focuses on trans rights and access to things like proper healthcare.

During her campaign for Minneapolis City Council, Jenkins emphasized that her priorities include affordable housing, raising the minimum wage, treating violence among youths as a public heath issue, and supporting women and minority causes. She's an advocate for Putting Women in Their Place, which supports progressive, pro-choice women running for office.

Jenkins has 25 years of public service experience and works as a historian with the University of Minnesota's Transgender Oral History Project, an initiative supporting the Upper Midwest Transgender community and empowering them to share their stories. She is also a poet, author, and performance artist, according to The Advocate.

Jenkins was not the only transgender person on the ballot for city council in Minneapolis; trans man Phillipe Cunningham contested the race in the city's Fourth Ward.

A lot of people have shown their support for Jenkins since her big win. Many supporters view this historic moment as a glimmer of hope during a year when trans rights have been under attack by the current administration. President Donald Trump has attempted to ban trans soldiers from the military, and his administration has rolled back protections for transgender students.

Danica Roem also made history Tuesday night by becoming the first transgender state legislator. She beat out Bob Marshall, 73, who regularly referred to himself as Virginia's "chief homophobe." He's also the author of Virginia's transgender bathroom bill, which would've required individuals to use the bathroom that correlates with the gender on their birth certificates.

Jenkins feels like she can be the voice of real change. "There is a very deep gap between white [people] and people of color," she said in a video for the Victory Fund, a committee dedicated to increasing the number of openly LGBTQIA public officials in the United States. "The disparities are present in health care, home ownership, employment, incarceration rates, [and] all of these issues are present on a national level, but really significant in Minneapolis, and I want to be a part of changing that paradigm."

Jenkins feels that by having a trans woman of color in the room, it changes the conversation, and gives the community a platform it lacked before.

"When people do try to enact policies that are going to be detrimental to [marginalized] communities, I can be that voice to derail that, to stop that, to resist," she said in the video. "Representation is power, and we need more of it."