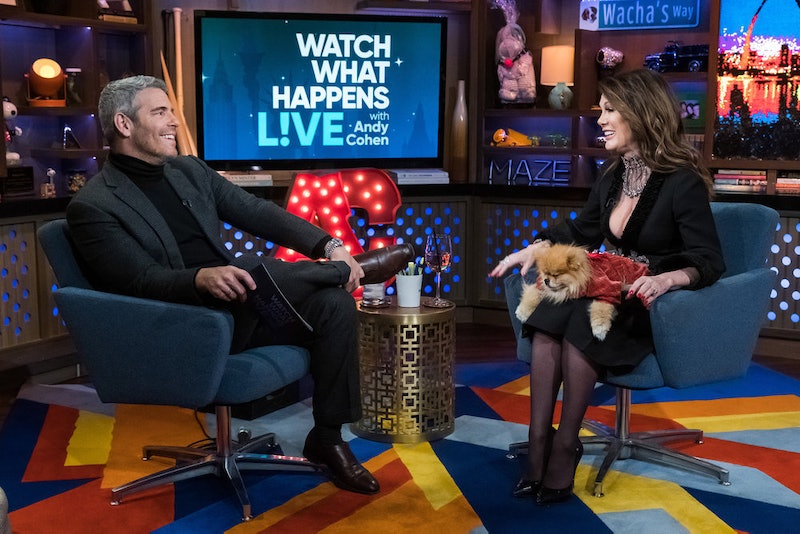 All the Real Housewives stars have fans, but none are quite as passionate as Lisa Vanderpump's. They care so much that they look out for her even when she's not actually offended. For instance, one fan recently came for Andy Cohen on LVP's behalf. However, he didn't let that fly. On Monday, Andy defended himself against Lisa Vanderpump stans who questioned him for not attending the Las Vegas opening of Vanderpump Cocktail Garden on March 30. All of Lisa's Vanderpump Rules costars were in attendance for her big night, in addition to Real Housewives of Beverly Hills cast member Camille Grammer.

Us Weekly reported that in a now-deleted tweet, an LVP stan asked Andy, "Why didn’t we hear or see you at @LisaVanderpump extravagant Caesar’s Palace restaurant opening. She deserves to be respected especially from you. Disgusting!" Andy clapped back at this person with a very reasonable explanation. The king of Bravo tweeted,

"because I have a two-month old son and was already away shooting the Vanderpump reunion. is that disgusting too?"

Of course, it would be great to have Andy at the event, but he can only be in so many places at once and he's a single dad. He deserves some slack. Plus, he just spent a marathon day with Lisa and the Vanderpump Rules cast shooting the reunion. That's more than enough quality time.

Apparently that explanation wasn't enough for some people, though. When one LVP supporter tweeted about giving love to their "Queen," Lisa herself interjected to set the record straight. Andy wasn't at the Vanderpump Cocktail Garden opening, but he did give her plenty of support in private.

The original tweeter apologized for their initial remark, which prompted the Real Housewives of Beverly Hills OG to tweet again. Lisa insisted that all is good between her and Andy and that they keep in touch on a regular basis.

Believe it or not, Andy and Lisa's explanations still didn't shut down all of the haters. One person actually called out Andy for using his child as an excuse, which, of course, prompted another response from Andy.

Unfortunately, this isn't the first time that the strength of Lisa and Andy's relationship was publicly questioned. In January, the Vanderpump Rules star caught a lot of flack for missing Andy's Real Housewives cast-filled baby shower in Los Angeles. Ironically enough, she wasn't there because she was in Las Vegas preparing for the Vanderpump Cocktail Garden opening.

The TMZ cameras caught up with the Real Housewife in February and Lisa explained her absence. Just like Andy reached out to Lisa privately about the Vegas opening, the two of them had a moment away from the cameras to celebrate Andy's new life as a dad. Lisa is not one to mince words ever. She told the camera crew,

"You know what I actually met with Andy before and gave him a cashmere blue blanket and a teddy bear. And I said I couldn’t be there because I was in Vegas. You know I’m opening in Caesar’s, so it’s a deadline. I have a job. The same job that I had before I was on Housewives. I didn’t make a career out of being a Housewife."

Obviously, missing the baby shower did not impact their relationship. Lisa heard all about baby Benjamin since the day he was born. On Feb. 8, she told Us Weekly, "I spoke to [Andy] the first morning. He was just so exhausted."

Not only that, but Lisa revealed, "I got a picture the moment he was born." Clearly, Andy and Lisa are very close if she got baby pictures right after Benjamin entered the world.