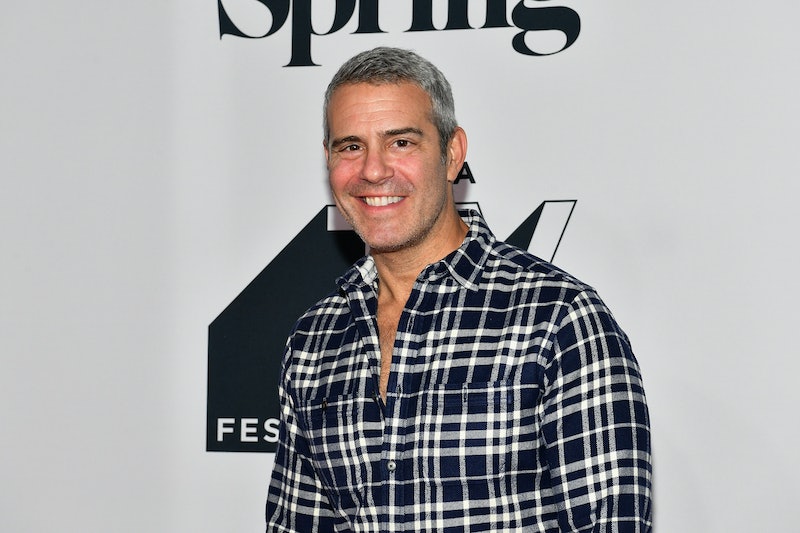 There may have been a slew of Real Housewives stars on Watch What Happens Live's special holiday OG episode, but it was Andy Cohen who stole the spotlight. On the Dec. 20 episode, Andy Cohen announced that he's expecting a baby via surrogate, and his announcement may just make celebrities and Bravo fans alike incredibly emotional.

Toward the end of the episode, Cohen addressed the audience to share a very personal bit of news. He explained that he wants to be as open as possible with all of his viewers, whom he considers friends, saying, "I have always tried to be as transparent as possible about my life — I overshare and I expect everyone around me to do the same." He then revealed the surprising and exciting news, which left the Housewives on the special, the audience, and the world, overjoyed.

Many members of Cohen's Bravo family couldn't help but share their excitement over the happy news on Twitter.

Dorinda Medley from the Real Housewives of New York City sent Cohen her congratulations and wrote, "I am so happy for you!!"

The Real Housewives of Beverly Hills' Lisa Rinna wrote that she was "beyond happy" for Cohen and it's safe to say that so many would agree with that.

Ramona Singer, a cast member on RHONY, may have been front and center to hear Cohen's announcement firsthand during the "O Come OG Faithful" holiday special, but she also shared her happiness for the TV host on Twitter.

One of the stars of the Shahs of Sunset, Mercedes Javid, who is also expecting a baby herself, wrote a kind message to Cohen on Twitter. She said, "I cannot wait for the new chapter in all of our lives."

Vanderpump Rules' Scheana Marie wrote such kinds word to Cohen and said, "You are going to be the best daddy!!!"

Camille Grammer of the Real Housewives of Beverly Hills was also thrilled for Cohen, just as the fellow members of the extended Bravo family were.

Congrats Are In Order

Real Housewives of Dallas' Cary Deuber echoed what many mentioned and said that Cohen will "be an amazing daddy!!"

One of the more humorous messages naturally came courtesy of Brandi Glanville from the Real Housewives of Beverly Hills. The former Housewife wrote, "You've had a lot of practice being a dad to a bunch of middle-aged woman/children you will be able to handle anything after that Mazel tov."

Glanville does make a fun point there. Like she and many other Bravolebrities related, Cohen will definitely be able to handle any and everything that comes his way as he heads into this exciting new chapter in his life.