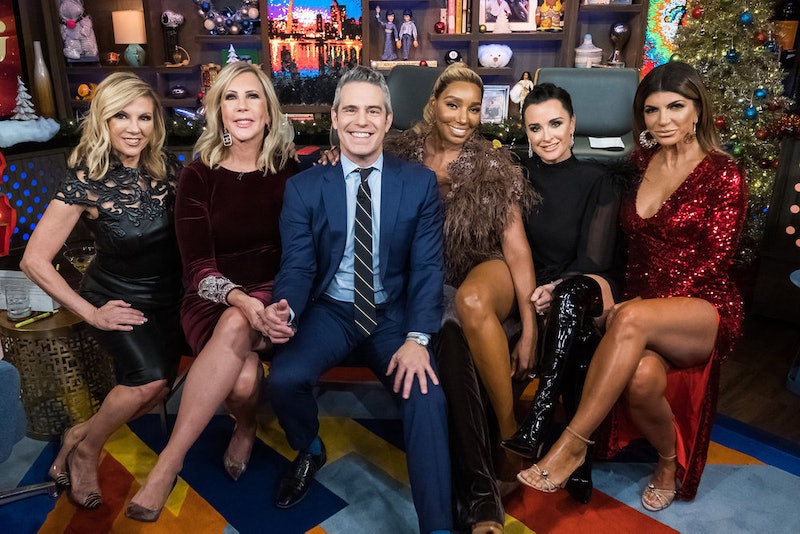 At most events with Bravolebrities in attendance, Andy Cohen is used to being the host. However, there's one major occasion coming up where he will actually be the guest of honor instead. According to People, Cohen's baby shower will be hosted by Real Housewives stars and the details already sound amazing.

The event will go down this weekend in California. Real Housewives of Beverly Hills cast member Kyle Richards is the one organizing the baby shower. She revealed to People, "We kept the list to mainly Housewives to simplify things." In all honesty, having a bunch of Housewives in one room never simplifies things, but it's bound to be an entertaining day full of high energy.

Kyle even joked to People, "Most men can barely handle one wife and Andy has a lot of wives to deal with!" Joining Kyle as cohosts are fellow Real Housewives OG cast members Teresa Giudice, Vicki Gunvalson, Ramona Singer, and NeNe Leakes.

How fitting — Cohen actually made his initial baby announcement with this exact group in attendance. He told the world that he's going to become a father during a December 2018 episode of Watch What Happens Live.

During that episode, Cohen told viewers:

"I’ve always tried to be as transparent as possible about my life. I overshare and I expect everyone around me to do the same. Tonight, I want you to be the first to know that after many years of careful deliberation, fair amount of prayers, and the benefit of science, if all goes according to plan, in about six weeks time, I’m going to become a father thanks to a wonderful surrogate who is carrying my future. Family means everything to me and having one of my own is something that I’ve wanted in my heart for my entire life."

On CNN’s live New Year’s Eve show, Cohen announced his baby's sex. He began by saying, "This is the biggest year for me," before revealing, "It’s a boy and I got to tell you something, I cannot wait to meet this boy."

During the same broadcast, Cohen admitted, "When I was growing up and when we were growing up … I just never thought it would be possible as a gay man to grow up and have a family." He finished, "And here we are in 2018, almost [2019], and anything’s possible. And I’m so grateful to a wonderful surrogate that I’m working with." And for his extended family at Bravo.

Cohen even moved his showWWHL to Los Angeles for a four-week run starting on Jan. 14, so he could prepare for his son's arrival. In a Jan. 7 statement to People, Cohen discussed the temporary WWHL location change, saying it was "a win all the way around." He went on to explain, "There will be great guests, great energy and I can make a 9 p.m. dinner reservation after we get off the air!"

And now he's in the vicinity for Kyle to throw him a Real Housewives of Beverly Hills caliber baby shower. Baby Cohen isn't even born yet, and he's already a major Bravo star. Just imagine his first birthday party. Which Real Housewife will host that event?