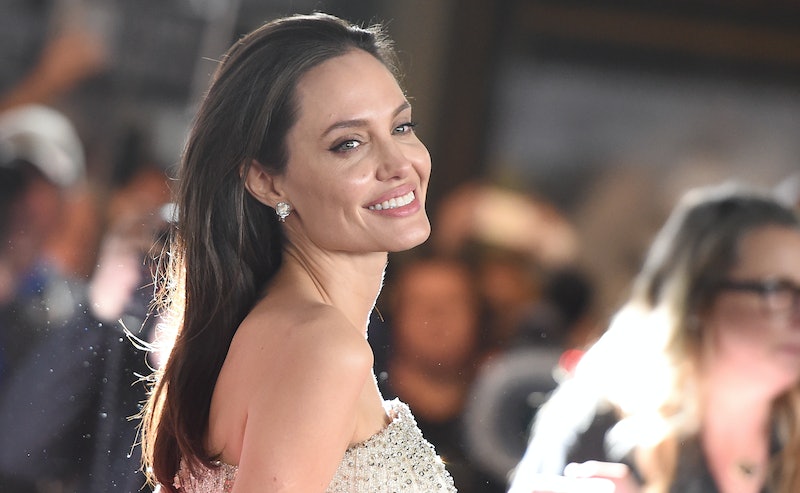 She's played a model, a news reporter, and a Tomb Raider, but Angelina Jolie's newest gig as a visiting professor at the London School of Economics is one of her biggest role to date. The Academy Award-winning actor gave her first lecture at the school about women's rights and sexual violence during war times on Tuesday, March 14, according to People magazine, ahead of her master's course this fall. As part of her new job at the Centre for Women, Peace, and Security at LSE, Jolie aims to inspire her master's students to be more informed on the gravity, prevalence, and stigma of sexual violence as it relates to women and gender, particularly in refugee camps.

Promoting the Time to Act initiative — which will "hold sexual offenders accountable for their war crimes," according to People — previous to her lecture, the filmmaker said that neglecting crimes that disproportionately affect women is unconscionable. She told People,

"When this kind of violence and abuse happens in peacetime, we are absolutely clear it is a crime that deserves to be punished by law. But when it happens in the middle of a conflict, on a mass scale, with such brutal violence, it is treated as something impossible to prevent or somehow justified by the climate of war."

The 41-year-old reportedly shared with her students that this subject matter is directly related to her advocacy work. As a special envoy for the United Nation's High Commissioner for Refugees and as co-founder of the Preventing Sexual Violence Initiative, Jolie seeks to "[prevent] the use of rape and sexual violence as a weapon in conflict" according to the PSVI website.

While no direct quotes from Jolie's lecture have been released, obviously having an A-list actor stop by your classroom didn't escape the mind of Jolie's students. The professor posed for a quick pic with her young proteges following her lecture.

Not only is Jolie a veteran actor but she is also no rookie when it comes to humanitarian work. People reports Jolie helped launch the PSVI back in 2012 with help from former British Foreign Office Chair William Hague. The pair opened the Centre for Women, Peace, and Security in 2015. While Jolie has years' worth of experience as a fundraiser, philanthropist, UN ambassador, and all-around women's rights activist, her 9-month course at LSE is sure to groom the next generation of passionate activists to take up the mantle.

According to the LSE website, graduate students from the LSE Gender Institute have gone on to work in "research and consultancy for government and non-governmental organizations in developed and less developed countries, international organizations, humanitarian and charity work, personnel work, civil and diplomatic services, representative politics, advocacy, the legal profession, academia, media and communication and in education." So it's safe to say Jolie's course will continue to keep the future in good hands.