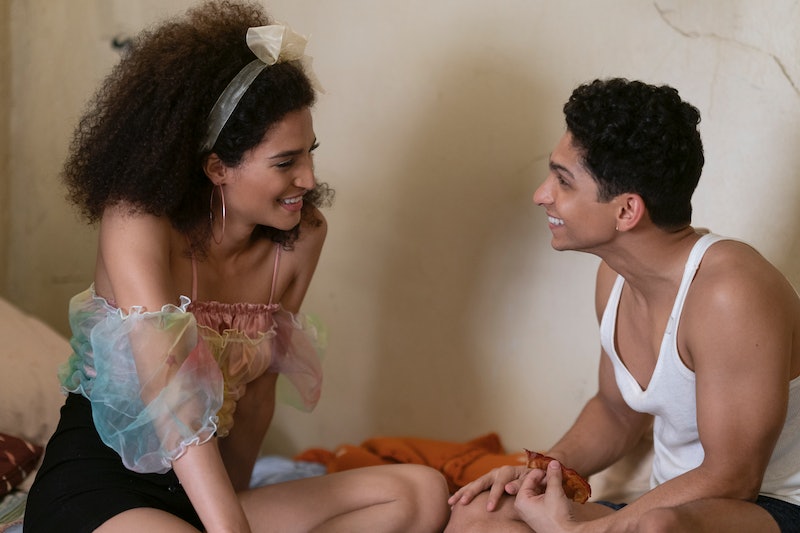 Spoilers for Pose Season 2 Episode 7. Earlier this season, Angel landed a big Wet N’ Wild campaign and sparks flew in her complicated relationship with Papi, but her life took a backseat to more serious issues like Candy’s death and the continued impact of HIV on the ballroom community. But, this week’s episode of Pose dove back into Angel’s arc as a rising model as she continues to score big gigs and rub elbows with glamorous people. However, Angel's story on Pose took a dark turn when she and Papi decided to do cocaine at an industry party — a decision that could derail her career and cause her to be banished from the House of Evangelista.

Angel asked Papi to come to an exclusive club party as her boyfriend (aww!) and the cute couple arrived in style to mingle with wealthy New Yorkers. They were soon invited to the VIP area by Angel’s acquaintance and saw people casually snorting cocaine off a table. Angel is ready to give into the industry peer pressure but Papi pulls her aside and warns her that Blanca will be furious if she found out they did cocaine.

However, Angel convinces him that it is okay because they were told it was prescription grade, which is somehow all the arm twisting Papi needs. They snort a line, dance the night away, and end up in bed together after a wild night out. The next day, Damon catches Angel and Papi with cocaine and tries to warn them, and the two swear that it's just a one-time thing. But at the end of the episode, Angel arrives at her big shoot two hours late (and visibly exhausted from a night out) and is warned by Ms. Ford that she’s playing a dangerous game with her career. And, to Angel’s surprise, the same guy who gave her the drugs is working on the set.

Fans are definitely happy about Angel and Papi in a relationship, but no one wants to see their love story go down a potentially tragic path. There's a chance that this was just an experiment, but it doesn't seem likely considering that Angel brought drugs into their house and will likely run into this same circle of people at future gatherings. If Angel develops an addiction, it could lead to her losing gigs or, even worse, losing her life if she has an accidental overdose. She has worked hard to leave sex work behind and pursue her passions, so it would be tragic if her journey takes a downward spiral because of drug use.

The people encouraging Angel to use drugs could be trying to set her up to fail or may even end up taking advantage of her while she is under the influence. Papi will probably continue to be supportive and encourage Angel stay on the right path, he cannot control the choices she makes as a grown woman. Angel and Papi have found love and happiness within each other as well as the Evangelista family and misusing drugs has the potential to certainly destroy all that they have built over the past few years.

Pose Season 2 is winding down with only 3 episodes left but, per Deadline, the show has been renewed for Season 3 so there's more time to explore Angel's life. And, hopefully her story won't take a sad turn that tears the Evangelista house apart.