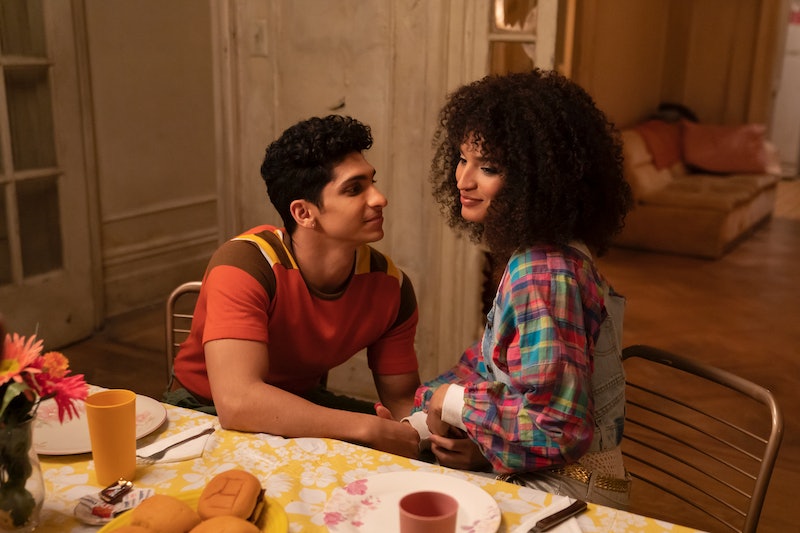 Spoilers for Pose Season 2 Episode 3. Angel and Lil Papi’s undeniable chemistry and love for each other has had fans buzzing about whether they would become a romantic item this season. The recent breakup of Damon and Ricky eliminated the only seemingly happy couple on the show, so fans were looking for some more romance to balance out the show’s serious topics. Thankfully, Angel and Papi’s relationship on Pose finally took a big step in that direction when they kissed and confessed their feelings for each other. Pose producer/writer/director Janet Mock previously told Bustle to look out for Angel's new love interest and Papi is honestly a solid choice. And not just because they're cute together — it might be one of the best representations of a romance between a trans woman and a cis male on TV ever, if not the first.

In the episode, Angel was devastated when she didn’t land a big role with a top modeling agency. So, Papi took her out for a stroll to give her a chance to vent and provide the esteem boost she needed to keep chasing her dreams. “You’re a model if I ever seen one,” said Papi. “That corny a** competition is not gonna stop you because it’s your destiny.” Aww. Angel had that classic TV realization moment that the supportive and loving man she had dreamed about was in front her all along and they leaned in for their first kiss. Papi asked her out and she initially hesitated to say yes, but later changed her mind after he opened up about how she was a prize in his eyes.

But, things got complicated when Angel picked up a Wet ‘N Wild contract and went on a photo shoot that caused her to miss the date with Papi. He admitted to being hurt by her standing him up (cell phones would have been so helpful back then) but was also extremely happy for her new career move. Papi encouraged Angel to her to follow her dreams but also realize that she is his ultimate dream. It was a sweet moment that proved he honestly cares for her well-being and doesn’t expect her to give up her dreams for the sake of a man.

Angel and Papi would make a great couple for so many reasons. They have a shared bond of feeling alone and rejected with a desire to have genuine romantic connections. Papi fully accepts Angel for who she is at this moment, is a part of her ball culture world, and pushes her to go after the life she wants. Angel has also shown a lot of loyalty and support for Papi, even when he was doing things that Blanca didn’t approve of in Season 1. And, let’s face it, they look really good together.

Showing a healthy and loving relationship between a trans woman and cisgender man needs to be prevalent on television more to dispel stigmas around dating transgender people. According to a 2018 study published in the Journal of Social and Personal Relationships, most cisgender, heterosexual men and women say that they wouldn't date a trans person.

Angel's love life was explored in Season 1 through her romance with Stan, but their union wasn’t necessarily healthy because Stan was a married man involved in an affair. It often felt like he was fetishizing her more than loving and respecting her, as Papi does. An Angel and Papi love story would be the perfect way to explore this topic in a positive light.

Hopefully, Angel will find a way to balance her rising professional career with a fulfilling love life. And perhaps her journey will motivate Papi to strive for even higher goals and realize that he doesn’t have to be alone forever. For now, Pose fans have their eyes on this couple and fingers crossed that they will become an official item.